In October 2013 Pauline Black not only has lots of shows with The Selecter supporting John Lydon’s PIL in the UK. The singer, actress and writer also celebrates a BIG birthday. Which makes it a perfect time to publish an interview she was nice enough to do with me (Joachim) late this summer via phone.

Our talk lasted for about an hour, lots of thanks to Pauline for taking the time. Parts of the interview have already been published in Dynamite magazine (in German). REGGAE STEADY SKA readers will get the complete thing  in four heaps over the next days.

Read all about the fun she is having with her current band, the new record “String Theory”, the chances of a one-time reunion in the original lineup of The Selecter, Pauline’s love for all the Ska phases from the old to the new, her fire that is still burning for the good political issues, some follow-up answers to questions concerning her plain brilliant autobiography “Black By Design” and much more.

REGGAE STEADY SKA: In “Black By Design” you stressed the importance of finding the right producer for your music. You said the producer of the first album by The Selecter somehow wrecked it. This might sound strange to many fans who fell in love with your music by listening to that album. I could relate to the part when you criticized the sound of the saxophone solo on “3 Minute Hero”.

I felt that if we’d had a different producer i.e. Roger Lomas who went on to produce the “Celebrate The Bullet” album, the first album would have sounded much better.

Pauline Black: When I was writing the book, I had some very strong opinions about how that album sounded. I didn’t really want to put people off listening. I felt that if we’d had a different producer i.e. Roger Lomas who went on to produce the “Celebrate The Bullet” album, the first album would have sounded much better. I thought that it was very unfortunate that the man who had produced “On My Radio” as our first single didn’t get the chance to produce the first album. But that was due to political fighting in the band, and a question who had control of it and who didn’t. But that’s all water under the bridge.

When I listen to it now, I think it has to be listened to in the light of what it is. And what we were trying to do. And how much money we had to do it. I think in terms of the songs, it stands up. Myself, I prefer the “Celebrate The Bullet” album. And I certainly much prefer the stuff that we are doing these days.

RSS: The producer of your new album “String Theory” is Neil Pyzer. Who is he?

Pauline Black: Neil Pyzer owns the label Vocaphone Records, which the album was recorded for. I’ve been working very closely with Neil since 2009. I recorded a solo album with him, which hasn’t seen the light of day yet, but will eventually, as Pauline Black. I had a Pauline Black band together. He plays tenor saxophone. Myself, Gaps Hendrickson (the other lead singer), and Neil are the triumvirat of the creative part, getting the songs together, recording and producing. But Neil is the overall producer. He has his own studio as well.

[On the songs from “String Theory”] 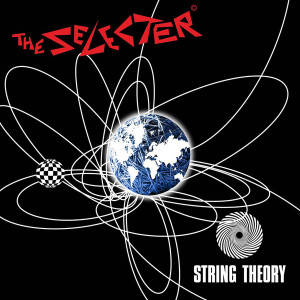 RSS: Let’s go through some of the songs. One with a strong message is “Prince Among Men”. What’s behind it?

Pauline Black: “If a man has to die, then make sure it’s for a good reason. Coz history is the killing season.” It’s aimed at a black leader emerging, to look at what’s going on in the world in terms of the atrocities that have been going on in Africa. And the way that Africa has been left after the colonial past. And it could relate to all kinds of people. Gaps lists a lot of people at the end, Lumumba …. And we don’t just keep it to men. “Prince Among Men” is a saying. It stands for “leader” this is someone who can take things forward. Does it make sense?

“London’s Burning” took in the riots in London and the whole occupy movement that was going on not just in this country – but in kind of different countries, too. What we were trying to demonstrate was, when you are in the middle of a global recession and the banks get off scot-free, and basically the people pay for it, these things are likely to happen.

RSS: Do you think the situations at the beginning of the 1980s and last year are comparable?

Pauline Black: Yes the situations are comparable. But the thing is, in the 1980s it was only in England. It’s a global recession now. Also, we didn’t want to rest on the songs that we did in the 1980s, like “Too Much Pressure”, which were a direct reference to what was going on socially at that time. We wanted to say what was happening now. Just because you can apply your old songs on a new situation doesn’t mean they are as relevant as in the 1980s. We felt that we had to say something about what was going on now. “London’s Burning” was very much with that in mind. “Flatworld”, too.

RSS: In the post 2Tone years you had careers being a presenter on TV and had a lot of success in theatre, winning a Time Out award as Best Actress for your role as  Billie Holiday in the play All or Nothing At All. I heard some glimpses of Jazz in songs like “Secret Love” and “Doors Ever Open” on your new album. Is there a connection?

Pauline Black: ”Secret Love” is a cover, the original is sung by Doris Day from the film “Calamity Jane”. It’s the song least likely The Selecter would ever do, updating it in that old school Ska sense. It’s a reference if you like. Ska was originated by people like Laurel Aitken, in the 1950s. That’s also when the song “Secret Love” would have been around. So, we thought it’s a good fit. We tried to show here that you don’t have to take songs that are known. A lot of people play covers from artists like the Ethiopians, Prince Buster. We took something completely out of context. We thought we could do something with it. Also with the toasting that Gaps does. People very much like that old school Ska sound. And it goes down an absolute riot when we do it live.

“Doors Ever Open” is a little more personal and that has some Jazz connotations. I think the unique thing about The Selecter is that myself and Gaps Hendrickson are a male/female duo at the front. That is pretty unique apart from Bob and Marcia in Reggae. And it’s certainly unique in our 2Tone days. Therefore we got a larger pool of songs we can look at, and songs we can do something with.

[On the influences outside 2Tone]

RSS: In what way did your time in theatre and before the camera have influences on your stage persona in The Selecter?

The frustrating thing about theatre: it is always someone else’s vision … Being in The Selecter … you are … able to have your own vision on stage.

The frustrating thing I find about theatre, it is always someone else’s vision – either the director’s vision or the playwright’s vision. Being in The Selecter and being one of the songwriters you are in your own wonderful world, and being able to have your own vision on stage. I don’t believe there is any band on stage without some theme that they wish to get across.

I take that as a given. Especially being 2Tone. With The Selecter we had an anti-racist, anti-sexist stance. And most of our songs fall into these two categories. It’s always been exciting in that way.

[On the concept behind “String Theory”]

RSS: At the end of the record the concept of “String Theory” is mentioned. To those who don’t know it yet, could you explain it?

Pauline Black: To explain what string theory means you need to go back one record to “Made in Britain” that we made the year before. We were coming back into the Ska arena. And we felt very much that the anti-racist stance had moved on. The language had moved on. Most countries all over the world now live in a multi-cultural environment. Multiculturalism was the new buzzword: people with different backgrounds, different faiths, different cultures, rubbing along together and getting along okay, which largely they do. That was what we were talking about on “Made In Britain.”

With “String Theory” we wanted to take that on further. People still find their differences. They celebrate their differences more than they celebrate the things that unite us. And the thing that unites us: We are all human beings and ought to be treated like human beings. The human rights that we extend to ourselves should be extended to people of all nations. “String Theory” was taking on that argument on an atomic level. Anyone is made of all those tiny little strings. It just meant that everybody is made of the same stuff. And if we are all made of the same stuff, then we ought to be celebrating this fact. We should extend the courtesy to everybody to live in peace and harmony, because we’re all united in that way.

Part 2, part 3 and part 4 have also been published. We also recommend you pick up Pauline’s autobiography “Black By Design” and the current album “String Theory”.

2ToneInterviewSka albumThe SelecterTwo Tone
Previous ArticleLondon’s Phenomenal Ska Impressario Gaz Mayall: I have To Do It My WayNext ArticlePauline Black Of The Selecter – The 60 Minute Interview Part 2 of 4