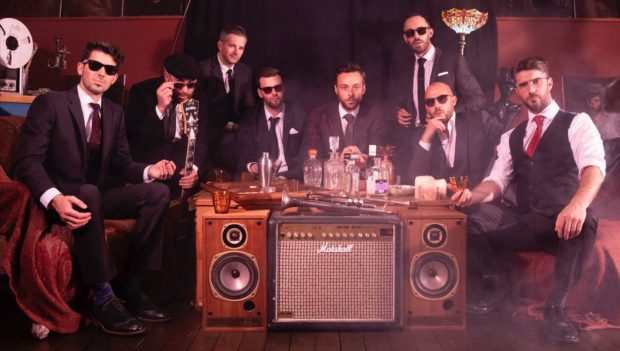 Some bands play it safe, some bands push boundaries. Gentleman’s Dub Club rockets past those boundaries, creating concept albums(!) that take listeners on genre-crossing, mind-bending sonic adventures, blending reggae, dub, jazz and jam-band aesthetics, creating a sound that’s somehow both rooted and futuristic. The band’s previous outings—especially the highly praised Dubtopia—won the respect of fans of bands like Dirty Heads, Stick Figures and Giant Panda Guerilla Dub Squad, putting GDC at the forefront of musical exploration. With their new album, “Lost in Space,” the band takes that exploration even further. The band’s preparing for the album’s January 25, 2019 launch, but they took time to check in with us.

RSS: “Lost in Space” takes the listener on a musical journey. As captains of the ship, how do you describe the journey that listeners are about to embark on?

Johnny Scratchley (vocals): Lost In Space was built around a story of us exploring the galaxy searching for the ultimate bassline, along the way we come across new species and planets, sometimes these were positive experiences and sometimes we had to light the fuse and get the hell out of there! Space is a great canvas for using real life metaphors and I think when we became comfortable with that, the inspiration came in spades!

Did you set out to create a concept album or did that realization hit you after you had completed most of the songs?

Toby Davies (bass): We had a very strong idea for the concept and imagery of the album, we’d been watching a lot of Rick and Morty, and generally dipping our toes in stuff like astrophysics and the possibility of parallel universes where different versions of events are played out simultaneously to our own. After Dubtopia—another concept album which saw us marooned on the ultimate desert island—we felt that the only way was up!

There’s so many influences in this album—obviously reggae, dub and dancehall, but also jazz fusion, rocksteady, electronica, jam-band rock and, on songs like “Intergalactic” and “God of War”, movie soundtracks. Tell us about your creative process and how you build that intricate, multi-faceted sound that flows through the album.

Niall Lavelle (percussion): We all play loads of different types of music and work on very varied projects, so bringing all of that into the GDC musical world is a must. That’s often how our favourite bands and artists hit upon a new sound, when they’re working with a traditional template but blending it with something different and personal. We try to stay true to the Reggae/Dub sound—using space and bass as a means to create pressure and release—but we also like to add our own flavours to the blend!

There’s a big studio sound to “Lost in Space”—how do you capture that in your live shows?

Nick Tyson (guitar): We actually do it the other way round—we often gig the tunes before we’ve recorded them so that we can bring the energy of the live show into the studio. We made “Lost In Space” during a time where we had taken a break from gigging, so to replace that we went to the middle of nowhere in Wales, rigged up the instruments and jammed for hours and hours, recording everything and listening back so we could try and get that loose and rugged feel of the live show.

What was it like working with Million Stylez and Winston “King Cool” Francis?

Toby: They were both an absolute pleasure to work with, Million Stylez did his verse remotely and when we got it through on the emails we didn’t really have to say much other than “send the acapella!” Winston is one of our idols so to do a session with him was a really special experience. He has had such an interesting life, working with some of the biggest musicians of the last 50 or so years, and you can hear that in every word he sings.

After an epic intergalactic journey, “Lost in Space” closes with a Lovers Rock tune featuring Winston Francis. Tell us about the creative process that led to that song and that musical approach.

Luke Allwood (keys): We wrote the instrumental and the chorus up in Wales when we were just jamming and trying things out. It was another song that came very naturally and seemed to hit a vibe immediately. Toby then sent what we had done to Winston and he wrote the verses and tweaked everything to suit his style. It’s one of our favourite tracks and we’re honoured to have Winston on the album.

What an album cover! How did that come about?

Johnny: That’s our good friend Mr Lee—we fed him all the information about the album—how we wrote it, what it’s about, what we were thinking of when we wrote the tunes – and he put everything through his genius filter and came out with this really fun and eye-catching album cover. The artwork for the singles is equally as good so check those out when you get a minute!

DubUK
Previous Article“History blurs things. Politics blurs things even more.” A conversation with Heather Augustyn, author of Operation Jump Up: Jamaica’s Campaign for a National SoundNext ArticleVeteran Reggae guitarist’s first solo record is a tribute to the movie music that inspired him.