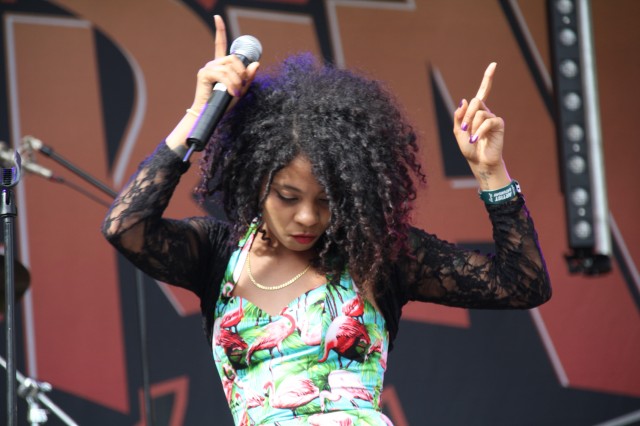 [dropcap]H[/dropcap]
er father was the drummer of the Sex Pistols, her mother sang in Culture Club and Boy George is her godfather. We talked to her after her brilliant show at Europe’s biggest Reggae festival Summerjam in Cologne 2012. Meet Hollie Cook, England’s rising Popreggae star.

RSS: Wow, that was the best gig we have seen here so far.

Hollie Cook: Really? Thank you. It was my first gig ever as a solo artist in Germany.

RSS: You did play here with the Slits two years ago. Was the Slits tour your first experience in playing live music?

Hollie Cook: As a touring experience, yes. I toured with the Slits for about four years.

RSS: How did you get into that band?

Hollie Cook: Family, really. I’ve known Ari and Tessa since I was a baby and I grew up with Tessa’s daughter, who is the same age as me. When Ari Up put the Slits back together, she invited all her friends’ daughters to come and record a song, so I met her again when I was 17 or 18 and recorded the vocals for “Slits Tradition”, the comeback EP the Slits released in 2006. Ari asked me to come and sing on the tour. For me it was the perfect introduction into professionally singing live.

RSS: It was a very nice tribute to play “Newtown” in your set today.

Hollie Cook: Yeah, it feels right for me to still sing these songs. I still feel very much like a Slit. It’s part of who I am.

RSS: Did Ari’s illness come very suddenly? She seemed to be so energetic when she played that tour, only a few months before she died.

Hollie Cook: I knew that she was sick, but her passing was still very sudden. No matter what you know you can never be prepared for someone so close to you to suddenly not be there anymore. It’s my biggest loss… I’m still in the midst of grief.

RSS: What is Ari’s influence on you as a solo artist?

Hollie Cook: It really helped me to develop as a performer. I’m very shy and had little confidence when I first started out. Ari just picked me up and flew away with me, literally. She made me feel comfortable with being myself on stage.

RSS: You’ve come a long was since we first saw you singing with the Slits in terms of stage presence.

Hollie Cook: Yeah, I was in my comfort zone as a background singer, but it took me a long time to adapt being a front woman in my own project.

RSS: Was it you that came up with the idea and the sound of this project?

Hollie Cook: To an extent. I’ve been working with Prince Fatty for the last five years. It’s only in the last two years that it became a solo project. I had friends I wanted to work with. My guitarist did the sound for the Slits for many years. I’ve also met people along the way. And I’ve been lucky that Prince Fatty has put me together with some really talented musicians. It’s been coming along really naturally. This line-up that you saw today is the most positive so far.

RSS: Your singing and Horseman’s toasting from the back of the drum set makes for an irresistible combination.

Hollie Cook: I’m glad it does. I love working with Horseman, the dynamic is perfect.

RSS: Is that the path you want to pursue in the future, with Prince Fatty producing?

Hollie Cook: Yes, for the time being, I’m really happy. He is an amazing producer. We are currently working on my second album. It’s a formula that works.

RSS: You played a couple of new tracks, didn’t you?

Hollie Cook: We played “And The Beat Goes On” from the new Prince Fatty album and a song called “Baby”, which was a cooperation with a French band, The Shoes.

RSS: Your choice of cover versions was very fitting. Even before you played “Hurt So Good” we were reminded of Susan Cadogan a few times.

RSS: Is 70s dub-heavy Reggae the kind of sound you grew up with?

Hollie Cook: I wasn’t really brought up with a lot of Reggae, even though both my parents are huge Reggae fans. It was a couple of my parents’ friends who really introduced me to Reggae. One of them made me a Reggae tape when I was about 14. At the time I was listening to a lot of Ska as well. From there I dug deeper and discovered Lovers Rock like Caroll Thompson and Janet Kaye.

RSS: What does your father think about your career in music?

Hollie Cook: He is very supportive and knows where I’m coming from, wanting to sing. I think it was really obvious to my parents even when I was very young that I was going to be a performer of some kind. As a little child I was into dancing and acting, but music was really what I gravitated to. They were very much behind it and allowed me to learn instruments and have lessons. I had a very privileged childhood really.

RSS: Having been a member of one of the most controversial pop groups of all time, did he not try to give you advice or steer you into a certain direction?

Hollie Cook: Not really. In a dream world, if I had become a lawyer he would be really happy [laughs]. But music relates us. He’s been through it all, good and bad, so he’s always had very sound advice. He’s been involved in a positive way, but also really let me figure it out for myself.

RSS: Musically he seems to be very open-minded. We saw him drumming with Edwyn Collins last year.