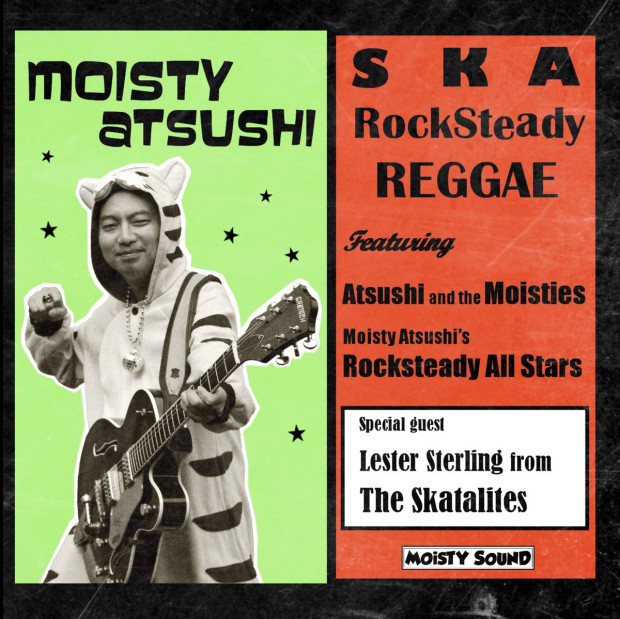 What a beauty! I feel like I have just found an old cassette that I used to listen to. Only this “old Jamaican gem” album is brandnew, recorded by Japanese native Atsushi in New Zealand and mastered in Argentina. How come? After listening to the whole piece (and buying it) I recommend you read the liner notes below.

Hi thank you very much for listening and reading this.

If you don’t know me, I’m Atsushi “Moisty” Ukito aka Moisty Atsushi. I love ska music, especially the Skatalites. I love it so much that I had to form a ska band in New Zealand where I live.

I have played in Risto Rockers and Skivvy in the early days in New Zealand. I had a great time with them with gigging and recording and touring NZ. However, it was always on my mind that I would love to create REAL ska music. So in 2006, I formed the authentic ska band, Atsushi and the Moisties.

Since then I have played countless gigs, events and festivals. Slowly I was recognized as a man of ska music in New Zealand. Therefore I was offered to work with overseas artists in New Zealand. I managed to help Chris Murray’s tour in New Zealand, promote the film “Rocksteady: The Roots of Reggae” by bringing Stranger Cole and DJ Mossman (music directer of the film) here.

Meanwhile I have been actively involved in many projects. My young prodigies of ska, Mini Moisties, were created. They appeared on my last Speedo EP.

I have also travelled around the world as a solo artist and worked/ recorded with overseas artists. Through this experience, I managed to learn a lot about Jamaican music. I even visited Jamaica and met many legends such as Bunny Wailer, Sparrow Martine (Alpha boys school’s music director).

When it comes to recording, I need to have vintage sound for my music. I knew what type of sound I wanted for my album however no-one in New Zealand could produce it. When I decided to make an album, it needed to be DIY. Luckily I had my old 4 track recorder to start. After “Kingsland the Great” single, I thought it would sound like the Skatalites, real authentic ska because I used an analogue recording. However, it was not like that. In the last few years I was lucky to talk to all those people who were heavily involved in Jamaican music, ska or rocksteady. They shared some of their ideas and tips with me. Victor Rice told me about tape compression, I learned about room sound and Stranger Cole and Sparrow Martin told me what was like back in the days.

At the end of the day, this type of recording was not everyone’s favourite. So I decided to record with people who wanted to do it. Rawiri and Leo of the Moisties/ Rocksteady Allstars and Heather of AceTones and Venus and The WinkWinks were happy to help me out.

We started to experiment with recording methods using my little 4 track recorder. We tried with different rooms to get different sounds using different micas and changing the positions of the micas. Nothing fancy. Mostly we used one or two mics. The recording process was not so easy as we had gone through three different analogue recorders due to breaking down. Well, it was truly the beauty of analogue technology.

I would not say this album is perfect, but this album is truly my start point towards creating vintage sound. I hope someone will like this. This album is just full of surprises! And I’m working on a B-Side project. In the old days in Jamaica, there were many versions for each song. So I recorded with many other musicians from NZ and overseas to record versions of this album. It won’t take too long to release because it’s almost finished!

I’m already working on new projects with the Moisties. If you like this, please stay in touch. And if you did not like it, give me another chance. I promise that next one is going to be way better.

Take this opportunity to big up all of musicians and people who involve this project. With you, this album would not be coming out.

Anyhow, thank you very much.