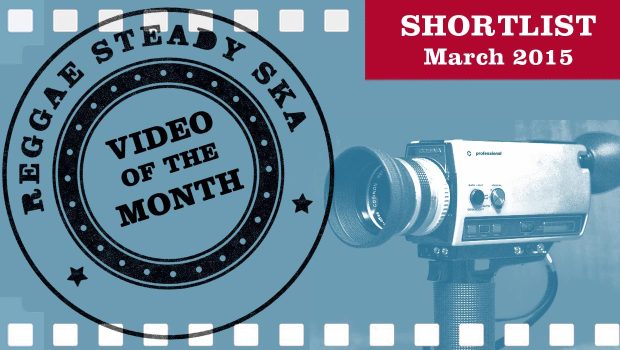 Ready to have have a look at the Official Ska & Reggae Video nominations for March 2015? Here they are.

The Bluebeaters are the best when it comes to Original Ska versions of pop or rock songs. After last year’s fantastic “Toxic”, the band from Italy cover “Roll With It” by Oasis now. A new album has been released on 13 April 2015 (Record Kicks).

Backbeat Soundsystem from England play a laid-back Reggae style. “Come Undone” is taken from the cool album ‘Together not Apart’ (Easy Star Records).

The Stiff Joints from England take inspiration from lots of different styles including Punk, Reggae and Vaudeville. CAM is taken from the fantastic EP “Circus On Repeat.”

With Gipsyska the name says it all. The band, formerly known as Antwerp Gipsy Ska Orchestra, also have a new album out (in Feb 15) called Kilo Gipsyska.”

As always, I highly recommend you take the time and watch all videos. You won’t regret it. They are all embedded in this article, or watch them in our “Video Of The Year 2015” playlist.

Done? Now let us know: Which one do you like best?

Deadline for voting is 10:00 pm, Sunday, 19 April, 2015 (Central European Time). The winner will be featured on the Reggae Steady Ska homepage for the rest of the month. Happy voting.

Also check the Reggae Steady Ska “Video Of The Year 2015” playlist for an overview on all the recent video releases.