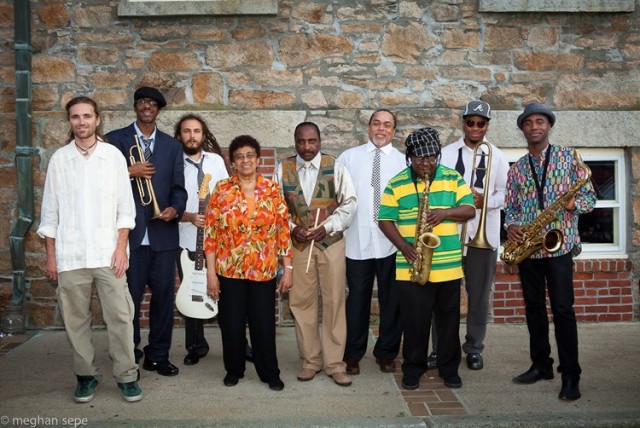 European Ska and Reggae fans are in for a real treat: THE SKATALITES have just announced a full tour of mainland Europe for November.

Lead by the last surviving original member, Lester Sterling, the band will present and preview tracks from their new album “Walk With Me”, which has not been released in Europe yet. They will, however, bring copies of the American pressing over and sell them at the gigs.

To celebrate their 48th Anniversary Tour, the band’s management has kindly provided us with a very exclusive competition: For each gig on the tour, REGGAE STEADY SKA is giving away two signed copies of the new CD. That’s a whopping 28 CDs!

If you want to win your copy, all you need to do is decide which concert you want to go to and send an email to “shows@reggae-steady-ska.com” with the name of that city as subject text and your full name in the main text. Everybody who takes part in the competition will also be added to the REGGAE STEADY SKA Newsletter. You can unsubscribe from it any time with one click, of course.

The competition runs until 7th November 2012. We will draw and notify the winners on November 8th. If you are lucky, you simply prove your identity to the person at the merchandising table and pick the CDs up from there. Who knows, you may even be handed over your CD by a member of the band.

If you think about coming to the Cologne gig, head on over here for a chance to win 6 x 2 free tickets! To enter the competition, simply join the Freedom Sounds Newsletter. The issue from Friday 19th October 2o12 tells you how to win the tickets.

Who’s new in the line-up for this tour?

After the passing of Lloyd Knibb last year, veteran Jamaican Sparrow Thompson has taken over drum duties. He and bassist Val Douglas have been friends for all their lives, having played together for some 45 years, so they provide a really tight rhythm section. Even it is sad that both Lloyds have left us now, Val and Sparrow have added some serious dub mixes to the sound of the band.

The newest and youngest kid on stage at only 22 is an amazing young trumpet player called Travis Antione. Last but not least, the band will again be joined by the one and only “Queen of Jamaican Ska”, Miss Doreen Shaffer as the featured singer.

Listen to the whole album here.