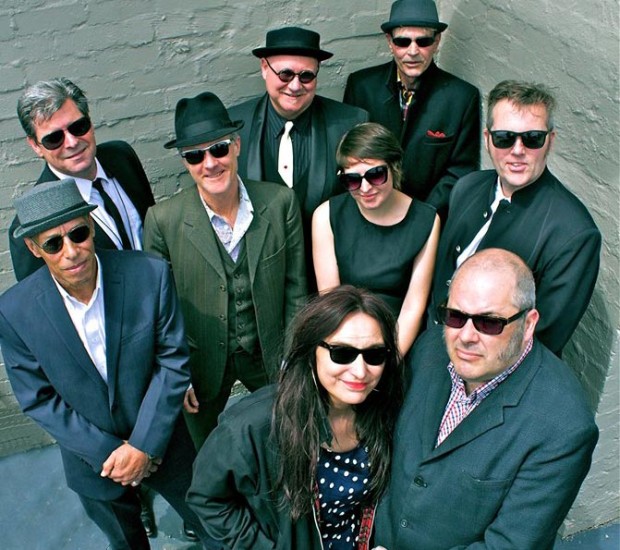 I met Steve Montgomery last summer when the Melbourne Ska Orchestra rolled into Canada [read the RSS interview with MSO’s Nicky Bomba]. When Steve’s not singing (and dancing up a storm) with MSO, he fronts The Ska Vendors, an eight-piece band that brings both musical excellence and Australian style to traditional ska and rocksteady. The Ska Vendors weren’t on the Toronto bill, but I met up with Steve and MSO vocalist/Ska Vendors guest vocalist Pat Powell for lunch, beer(s) and a serendipitous, two-hour, music-filled conversation.

The Ska Vendors have been together for more than a decade but your first album just came out last year. Why is now the right time?

Steve: We’ve done a lot of six-track Eps—homemade apple pies I call ‘em—then we got offered a deal with Transmitter Records. So we said, let’s do an album—13 tracks, nine originals and four covers.

Steve: That gives me goose bumps you sayin’ that. When we started there were a lot of bands in Melbourne riding that 3rd wave thing. Great bands, great people, but not my cup of tea. When we came to getting the band together we said we needed to play some old shit. We started off with some two-tone-esque, but to be honest our passion is that old Jamaican sound. We love that stuff. But apart from Pat, who’s a guest vocalist, none of us are Jamaican, so we’re never going to get that authentic Jamaican sound. What we decided was that we’d do a version of that sound as best we could. It came out as our version of the root-sy sound. We didn’t want to have any angry guitars, just picking—and John [Holmes, guitar] does that really well—which added the skank.

What was the first song you did as The Ska Vendors?

Steve: A cover of Owen Gray’s No More Doggin’. It’s a 12-bar blues but we wanted to skank it. We really love that music, it speaks to the history, not just ska, but rocksteady. The first song of our own we played was What Will You Do?

“The universe has conspired to pull us together, and it’s worked beautifully!”

Steve: Steve [Phillips] wrote that song. It adds that honky tonk music we’ve learned along the way. First it was rhythm and blues and before that shuffle—then you had mento and calypso, mashin’ that all in. There was jazz happening and then the boogie-woogie sound. Chris [Rogers] put an upbeat to it on bass—he’s a tough bass player—and it’s right on the money. We got a lot of pleasure from that one.

You’ve got a great piano player, yet for your cover of Theo Beckford’s Easy Snappin’—a piano-driven song—you chose a different sound.

Steve: We’re covering the version he did in 1971. It’s more of a roots-reggae version. We used to play it as straight ahead R&B but I wanted to change it around for the recording. I got the horns in and we made it a funky reggae sort of sound.

Speaking of history, give us some background to ska in Australia.*

Steve: In the 80s there was a big Australian 2-Tone movement with bands like The Jumpers, The Allniters, The Loonee Toons, The Strange Tenants, and there was Club Ska [and here, from 2015], a band out of Sydney that Pat sang with. It was the only band doing the old style ska because everybody else was doing 2-Tone.

Pat: I flatly refused to do the 2-Tone. I had left the UK in ‘77 just before 2-Tone kicked in. I was living in West Germany so I didn’t hear any of that. I arrived in Australia in ’81, and I see ska bands and I’m thinking, really? Ska in Australia? This is really odd. So I went to see a ska band and it was this punk-infused, up-tempo thing and I just couldn’t relate to it. I was in a reggae band at the time and doing very well when I went to a record launch and met members of the band The Allniters. They said they might do some recording, was I interested. So we did an EP called Igniters. It was a combination of the Allniters, me, and a rock band called Spy vs Spy.

Steve: When The [reunited] Specials came out to Australia, there was this thing up in Sydney they were calling the Australian 2-Tone All-Stars. They invited me and a couple of the Ska Vendors to be a part of that band, and Pat was along as a vocalist. That was when I heard him and said, wow, that guy can sing. So then we met and that led him to coming down to Melbourne to play with the Ska Vendors. It was a packed house the crowd loved it

Pat: Back in the ‘80s when I was in Club Ska, I was the only one doing traditional ska. Steve and Nicky [Bomba, ringleader of the Melbourne Ska Orchestra, Bustamento, solo stuff and more] , have pulled a lot of the ska bands together so that we’re all on the same page, so what’s happening is a camaraderie that wasn’t there 30 years ago when we were younger and hostile and trying to be number one. Now everyone’s saying this is big enough for all of us to share, we can all enjoy the same pie. It’s nationwide from Perth, Brisbane, whatever, we all now connect and communicate and do whatever we can to keep the music alive. The universe has conspired to pull us together, and it’s worked beautifully!

What’s next for The Ska Vendors?

Steve: We just want to keep playing! We’d love to come overseas and do our own thing. We’re just a bunch of people who love this music so much. And we bring an Australian filter to it.

Pat: One of the best things that has happened to me in the past years is connecting with Steve and with Nicki. It’s a real joy to be part of this particular family. And what’s great about it is that I don’t have to think about it, I grew up with it. All I’m doing is getting off on stuff I got off on when I was a kid!

*What followed this question was a 45-minute, 3-pint, history lesson from professors Montgomery, Powell and Bomba (who was also at the bar), filled with names, dates, bands, venues, shows and albums, beginning with the Australian connection to the original ska sound through the 80s [fun video clip!] and right up to today. Any errors or omissions—and I’m sure there are plenty—are completely the fault of the author. CB

The Ska Vendors album “Feelin’ Fine” is available at itunes.