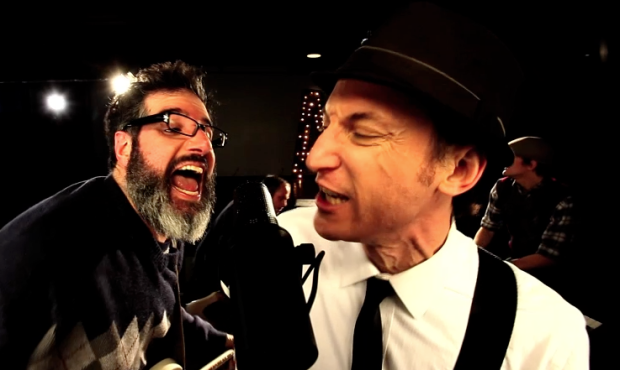 Three words that describe your music/performance:
Your favourite socks.

Your van stops in front of a venue. Someone accidentally comes by, sees your equipment and asks about your band. How do you convince her or him to come to your show later?
I offer to buy them a beer.

What’s the most-likely compliment from fans after a show?
“That was so much fun!”. Then I say, “Yes! thank you! Do you have a sister?”

What was the weirdest description of your music that you ever heard or read?
An older fan once told me I look and sound like Jack Teagarden.

What are sure signs that your show has been a success?
Everyone wants to stay and drink…

Have you got any mentors/idols that helped you get your act together, or inspired you?
My mentor is Producer and Singer-songwriter, King Kong Girio. As for inspiration, in ’93 I met original Skatalites, Rolando Alphonso, Tommy McCook, Lloyd Brevett, Lord Tanamo and Lloyd Knibb in California. Rolando gave me two LP records they brought from Jamaica and told me to stay true to my roots. 20 years later Buster Bloodvessel and I went shopping for shorts and he told the shopkeeper I was the new Prince of Ska hahaha.

What do you like more: Performing live or recording in the studio?
I love both but nothing compares to playing live and connecting with the audience.

What does your rehearsal spot look like?
Carpets, lamps, dead keyboards and lots of cords (and chords).

If there was an inscription above your rehearsal room, what should it be?
Turn down the keys!

Which other band is closest to you personally?
The King Kong 4 (King Kong Giro)

What is the most under-rated band in the Reggae Steady Ska scene? (Other than yours)
The King Kong 4.

What’s the best thing about the global Ska community?
Shared values and a commitment to enjoying life.

Were there any moments you wanted to quit? What made you go on?
In 2002 I lost everything, house, wife, car, dog, totally bankrupt. I had to dig basements and eat plain noodles every day. The trustee let me keep two things so I could continue to earn a living; my 1968 Telecaster and a ’78 Lambretta Jet 200. (I told him they were old and worthless…. ). I gave up construction to move to Costa Rica and just surf for a while. That’s when and when I started loving life again.

Three facts that mustn’t be missing in any text about you?
I love the ocean like I love to breathe
My mission in life is to help people see their dream as reality
I like to put things away

What are your next steps?
I want to collaborate and perform with other amazing ska bands and artists.

What’s the best way for fans, friends to stay in contact with you?

questionnaire by Reggae Steady Ska and The Ska Music Yearbook