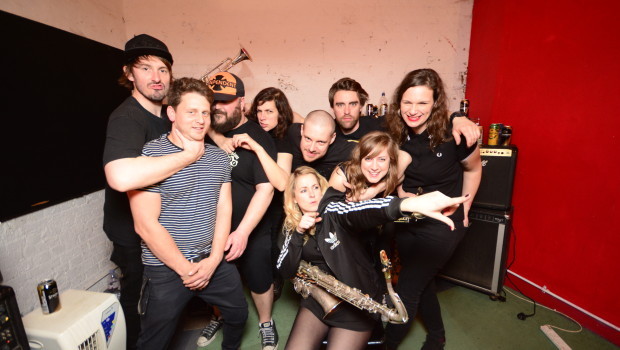 We have been following the remarkable rise of The Meow Meows at RSS headquarters for the last five years or so. The 9-piece troupe from Brighton are a welcome breath of fresh air to the Ska scene. Following on to their first two albums in 2009 and 2013, they are now about to release the brilliant new Prince Fatty-produced EP “Friends on Benefits”. We managed to catch up with six members of the band to what turned out to be a highly entertaining interview.

The Meow Meows are:

The other three band members are Emma (sax), Chaz (drums) and Ian (bass).

The Meow Meows consist of nine people. You write songs together and even design the record covers. How would you describe the chemistry within the band?

Danny (Boy): A complete shambles until something good comes out and then we embrace it.

Ellis: We are a massive dysfunctional family…

Danny (Girl): ….a nine-headed beast eating its own tail.

Alex: There is a lot of team spirit. Some of the songs we just jam on together, other times me or Danny (Boy) will come in with an idea and try and get everyone else to listen to it

Brighton has quite a good record of Ska bands, most notably the Hotknives…

Hanna: Mick Clare is the uncle of one of my good friends.

So are the Hotknives a musical influence on you?

Matt: We like them but our influences are huge and varied, and very different depending on which band member you ask.

Alex: Most of the time when I write a song for the band I try and get as far away from a regular ska sound as possible and I try and stretch the boundaries of what can count as ska. Like “Siberian Soup” is basically an alternative indie rock disco song but it’s got a horn section and an off-beat rhythm in it, so technically it’s ska-ish.

Danny (Girl): As you see, we come from very different musical worlds.

Danny (Boy): Yes, we all listen to completely different things but somehow ended up playing in ska bands.

So what attracted you to this sound at a time when it was not exactly popular?

Alex: That is a good question and I have no idea.

Matt: I think Ska, and 60s garage rock ‘n’ roll are the main genres we gravitate towards, and can somehow agree on. Ian listens to nothing but that stuff and in the early days especially a fair few songs evolved from his bass lines.

Alex: And 60s soul and Ska are just undeniably brilliant. You’d have to be dead inside to not be moved by it.

I think it’s refreshing that you bring in all these influences, especially as many current Ska bands seem to be stuck in the 2 Tone time capsule.

Danny (Girl): Yeah, we can’t be accused of that!

Danny (Boy): I suppose the cool thing is we don’t actually try to do that. It just happens naturally.

Hanna: There’s something a bit too macho about the whole 2Tone scene.

Alex: And we have NOTHING to do with Third Wave Ska. I hate it. Wacky Californians in three-quarter-length shorts playing the same chords over and over.

The development from your first album to the new EP is remarkable. How important has Prince Fatty been in that development?

Alex: He’s a fucking brilliant engineer and he made us sound like we could all play our instruments! The first album was basically us banging out songs in a basement underneath Ian’s shop whilst drinking heavily and not really thinking about it. The more recent stuff is a bit more deliberately crafted…

Danny (Girl): I think it’s also a result of us playing together so long.

Hanna: When we recorded with him, he was quite tough with us. He made us slow things down a lot, remove some of the musical clutter on the tracks. And he kind of whipped it into shape a bit.

Alex: Yeah, he called it “trimming the bush”. We can’t say enough nice stuff about Prince Fatty – he is a legend!

Lyrically, there’s much more political and social commentary on the newer tracks. Is this because British society is changing for the worse or has your songwriting changed?

Alex: British society IS changing for the worst, oh my God yes. And also we’ve grown up a bit and we’re paying more attention. The whole UK politic has shifted really rightwards in the last five years, and it terrifies and angers us. I heard in Berlin they were bringing in rent caps so that artists and people on low wages can still live there. That’s amazing, because it means there’ll be some lifeblood in the city still. If you even suggested that in London, you’d be ridiculed as a communist and your head would be chopped off and put on a spike outside Downing Street and Iain Duncan Smith [British Secretary of State for Work and Pensions, the ed.] would piss in your eyes.

Danny (Girl): I don’t think it’s so much about growing up. Rather we’re more confident to write political lyrics in a way that doesn’t sound too earnest or righteous.

Hanna: Yeah. We used to just write about tragic relationships. But we channelled the anger towards crap boys to more deserving targets.

A good example is Friends on Benefits, the title track of your new EP.

Hanna: Yes – it’s a bit of a wry look at the way people who claim benefits in this country are demonised.

Matt: The song is a reaction to the right wing media constantly attacking the welfare state, which may not be perfect but it is fundamentally a good idea to look after people who need it.

So it’s a reference to the TV show “Benefit Street”?

Danny (Girl): I had to sign on for a while when I was unemployed and it’s deliberately made a bit dehumanizing to encourage you not to claim benefits. But Friends on Benefits is more about the general idea and how people with shitty jobs are being encouraged to blame people who depend on benefits rather than who is really to blame.

Alex: And now that the Conservatives have just won an election and they’re in government without a coalition partner things are going to get a whole lot worse. They’re going to cut benefits for people who are working in low paid jobs: If you’re on minimum wage in the South of England you can’t really afford to pay rent and buy food without benefits. They say they want companies to pay higher wages so that they have to pay out less in benefits but you need to pass laws to MAKE them do that, which the government has absolutely no intention of doing

Danny (Girl): In schools, the budget for children with special educational needs has been slashed.

Alex: All you hear about in the media is how immigration is basically a problem that needs to be minimised. You never hear how our health service completely depends upon it.

In your press release it says that “Friends on Benefits” was a response to a theatre project. What’s the story behind that?

Alex: We were contacted out of the blue by a theatre & dance company who were looking to commission 12 songs by various bands  and composers and then match them up with different choreographers or dancers, so it had to be danceable. We had two weeks to write and record a song! It was the fastest we ever worked.

Hanna: You can see the video here. The dance that was made for our song was rather…. Odd!  Not what we were expecting.

Alex: It’s proper modern ballet! Not exactly an art form any of us are familiar with.

Matt: I think we rose to the occasion, it’s one of my favourite songs now!

Alex: The other two songs are ones that we had that were basically finished at the time – we managed to pin down Prince Fatty who had two days in between finishing another album and flying out to Thailand and we smashed the whole thing out in that time

So is it a one-off EP or will it become part of a new album?

Hanna: We are writing new songs at the moment

Alex: I think “Friends” will be on the album but the other two tracks are kind of strange and experimental. Plus I hate it when a band has a “new” album coming out and you get really excited and then about half the songs have already been released.

Matt: Song recycling is lazy and it’s fun to have little EPs here and there, and good to have a cheaper option for people who don’t want to spend ten pounds on a full album.

Why did you decide to release it on an American label, Jump Up Records?

Hanna: Chuck Wren just got in contact after we did Somehow We Met, our last album. He really liked it and wanted to release it on vinyl. We sent him the songs for the new EP and asked if he’d be interested in releasing it and he said yes!

Where do you think will you take the band in the future?

Matt: To the pub!

Danny (Girl): More festivals and to soundtrack the revolution! I really love hanging out with these bastards so I’d just be happy to keep on doing what we’re doing.

Hanna: I’d like to do a tour in Europe. Playing in Germany back in 2009 was one of my favourite experiences. Hopefully we’ll release a new album early next year.

Matt: We’re not a hugely aspirational band in terms of a career path and I think that’s part of the joy – no pressure. Having said that we obviously want to write better and better music and play better and better gigs.

“Friends on benefits” will be released worldwide on 13 July. You can order it via The Meow Meows band website.
or at download here:
Amazon
iTunes
Google Play