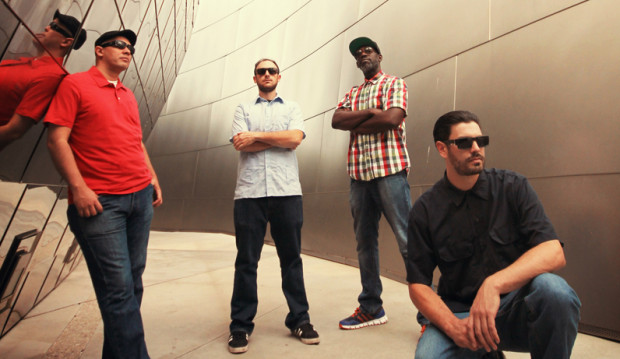 The Expanders from Los Angeles are on a mission to introduce the world to Roots Reggae music. Four years ago they released their self-titled debut, followed by “Old Time Something”, a free album of classic Roots covers two years later. As The Expanders are about to release their sophomore long player, “Hustling Culture”, we had the chance to ask a few questions to bass player and co-vocalist Chiquis Lozoya, who some of you may also know as part of Hepcat.

Regge Steady Ska: Your album is called “Hustling culture”. What does it refer to? Who is hustling who?
Hustling Culture is a reference to us sticking to our passion – which is the classic reggae sound – and not attempting to change in order to fit the mold of any trend in music today.

At the moment there seems to be a Roots revival in America. What attracts Americans in 2015, especially in the LA area, to 1970s Roots Reggae?
I can’t tell you what is attracting Americans to Roots Reggae.  I can tell you that in Los Angeles, the fans tend to lean towards the classic sound. Since the late 90’s and 2000’s, we have had a scene unique to the rest of the world. In other areas you’ll find that lots of bands tend to blend sounds and influences but out here I notice the musicians tend to sound more like the records they are listening to.

What has attracted you to Reggae?
I know all of us were introduced to reggae in different situations. Before the internet, it was much harder to discover music. You had to know someone who was into it or had to take a chance and drop money on a record before you even heard it.  Now you can type in Alton Ellis into a search engine and find his entire catalogue.

A lot of the lyrics in Jamaican Roots Reggae praise the Rastafari belief. Some might argue that it is an integral part. Hhas this ever been something you considered? How important is spirituality for your music?
Spirituality, positivity, and love. These are all important to us. What is more important in life?

True. Another theme often found in Reggae lyrics – and one that appears in your lyrics too like in the song “Top Shelf” – is praising marijuana. Some US states have legalized it now. In what ways has that changed society?
It may be too soon to assess the impact on society.  I can tell you however that sensimilla never kill nobody, and no one needs to go to jail over a little herb.

In your press info it says that you were inspired by reggae archivist Roger Steffens’ record collection. What does that mean? Did he let you raid his collection?
Devin (Morrison) and John (Butcher) were friends with Roger Steffens’ son and were often at the house browsing the archives.  Many mix tapes were made and exposure to obscure tunes and artists were absorbed.

Generally, you have taken your time. Hustling Culture is only your second original album in over ten years of band history. Was that a conscious decision? What took you so long?
There are many reasons for this. Devin and John were both in college for a lot of the time. I was playing with a lot of bands concurrently. We do tend to take our time with our music. We are very meticulous about our sound, examining every part of the song over and over until it is just right.  When recording to analogue tape, there is little room for error when tracking. We don’t want to release something and later think, “If only we would have done this or that different…” We want to make records that we can enjoy listening to many years later. Good songwriting is very important to us.

It definitely shows on your records A couple of years ago, you released a free, and really impressive, album of roots covers. What were your motives behind that?
Old Time Something was a really fun project for us because the tracks on that album are all songs that we used to play live all the time. We thought capturing our take on the tunes and giving it away for free would be a good way to introduce people to songs that they otherwise may never have heard.  We hope that people listen to that album and find that they want to hear more from those artists.  There are so many amazing underappreciated and little known tracks and artists.

You recently signed to Easy Star Records, one of the world’s leading reggae labels. What difference will it make for the new record?
Having the support of a label like Easy Star is so critical to us. They have been really supportive. We really feel honoured to be part of their roster. We know that they will get the record into places we certainly could not ourselves. Eric and Lem are super nice too! They make us feel like family.

Your website lists an extensive US tour. Do you have any plans to play outside the States, for example in Europe?
There are no immediate plans but Europe is definitely on our list of places we want to go! LET’S MAKE IT HAPPEN!!

“Hustling Culture“ is out now on Easy Star Records.

Early ReggaeLos AngelesRocksteadyRoots Reggae
Previous ArticleWicked Sounds 2015: New York Ska Jazz Ensemble – Free As A BirdNext ArticleThese Are The Nominees For Album Of The Month May 2015