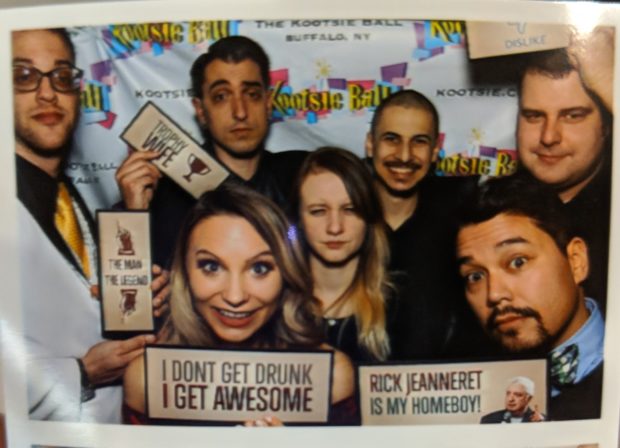 I first saw The Abruptors a couple years ago in a packed bar in Buffalo, New York. Back then they were known as the B-Side Basterds and they were already packing the dancefloors with tunes that were a blend of Trojan classics, 2 Tone, and R&B. Over the years they’ve just gotten better, tighter and even more popular, regularly playing gigs across the region and up into Canada, building an international fanbase and pumping out irresistible new tunes. I called the band during one of their practices and everyone jumped in for this interview.

“Not a Love Song” came out back in 2015. Is that about when the band came together?

Mike Geraci: We’ve actually been playing together for about eight years under a different name. I believe you have seen us once with the English Beat when we were the B-Side Basterds. About four years into that, Evan, Mike [on organ] and I decided we wanted to play a more traditional, rocksteady style of music. The other half of the band didn’t. So, we took a bunch of the songs that were meant for B-Side and started The Abruptors.

What inspired The Abruptors’ sound and how would you describe it?

Mike Geraci: B-Side Basterds had played with Deal’s Gone Bad. I didn’t know what they were or who they were. The lead singer [Todd Hembrook] looked more like a hipster, and I thought you’ve got a flannel shirt on and a little curly mustache. I thought it was gonna be some hipster garbage. Then he opened up his mouth and sang and he had this very traditional sound mixed with soul, and I just fell in love. That really inspired me to write more songs like that. Half the band didn’t want to play that style of music, so I put the Abruptors together. I would say our main influences, at the time, were The Aggrolites, The Pietasters and older ska like Derrick Morgan. Late 50’s early 60’s ska, too. The Specials are definitely a huge influence. Mike (Yearwood, organ) and I were just listening to a whole bunch of the Trojan Box sets. We still reference that stuff all of the time. Despite that, our music doesn’t necessarily fall into the traditional category. That’s kind of hard when you’re set in 2018 and you weren’t born in that era. We do our best to incorporate our own country’s sound, such as soul music, mixed with anything from rocksteady to just ska in general.

We don’t often get the whole band in on an interview, so let’s hear from each of you. What drew you to ska and what are your musical interests?

Kaley Lynch [vocals]: I saw an ad looking for a singer for a ska band and at that point I had been mostly listening to Third Wave—Streetlight Manifesto, Reel Big Fish. That was kind of my introduction to ska. My gateway drug, if you will. Once I was in the band, I got really, really into The Specials. I love the socially conscience lyrics. That was something that I never heard before, in any sort of ska music or any other music, honestly. That was a really cool way to get into it.

Tony Berrafato [bass]: As a bass player, Streetlight Manifesto had been a pretty huge influence on me, personally. But, as of this week I’ve been listening to a lot of Deals Gone Bad. I’m discovering a lot of the older stuff that I’ve never really listened to before.

Toni Berrafato (sax): My biggest influence is Big D and The Kids Table, Streetlight Manifesto– other bands people already mentioned. I think Mike (Geraci) would be upset if I listed any more Third Wave bands! Before joining this band, I wasn’t super familiar with the more traditional type of ska. I asked Mike to send a bunch of bands my way. I’ve been trying to learn how to write more within the genre and I haven’t quite gotten the hang of it yet. But, I’m hoping to get there soon.

Here’s something I didn’t realize about your band—Tony and Toni are married. It must be nice to have somebody share that musical side in the house.

Tony Berrafato (bass): It’s definitely something that we, as a couple, look to do. We’ve been playing together since we were in college and that’s been our thing for the longest time. We’re just keeping it going. We definitely both liked ska before, but neither of us played in a ska band prior to our college band. I’ve played in a couple other bands since then, but I always come back to ska. It’s my favorite genre to play.

Toni Berrafato (sax): Tony and I just had a baby. She’s about 5 months old and she loves Hepcat. It’s hilarious—the second you turn Hepcat on, she lights up like it’s the best thing she’s ever heard in the entire world!

Mikey Yearwood [organ]: I guess my biggest influence was probably The Clash. Not so much their ‘77 stuff, but their later albums like London Calling. I like the ska sounds on that. I grew up listening to a lot of them, and Sex Pistols and all that punk. And then you get a little older and you try to slow things down and then you listen to other bands. I would say on the ska side, probably Madness, and English Beat is probably my favorite one. The Slackers are really good and Vic Ruggiero is really great on the Hammond. I would take any chance I could to sit down and have a beer with him … man, that guy is all over the globe. That guy’s the best.

Evan Kaminiski (baritone sax): As for influences, I guess it would be Charles Mingus and Miles Davis. I’m very much a jazz guy. I had to screenshot a Wikipedia page of what ska is on my phone because for the longest time I had no idea what to tell people. This has been more of a learning experience for me, if anything. Yeah, I joined the band eight years ago. So, it’s nice to get to do this as a way to branch out a little bit more, expand my horizons.

Years ago, I had the privilege of talking with some of the original Skatalites. They all told me that when they were coming up, they were listening to Charles Mingus, Miles Davis, avant-garde B-Bop artists out of New York. They said they created their sound by listening to jazz artists, so you’re going down a great path.

Evan: I guess I’m more scared now of how I anticipated [what the Skatalites were thinking]!

Alex Schultz (drums): Like most of these other guys, I grew up with late 90’s early 2000’s ska -punk stuff. The drums are completely different when you try to play this kind of music. Everything I’ve learned to play for this band is basically from listening to The Slackers. It’s all as authentic as it comes.

To someone looking in from a neighboring city 80 miles (130 km) away, The Abruptors seem to creating a ska scene in Buffalo where one did not exist. How are you making that happen?

Mike Geraci: That’s a tough question. I would say that it still doesn’t exist. But we’re trying. I mean, we’re still the only ska band in Buffalo. It’s been that way since B-Side Bastard days. But, it’s really helped us move our band along. That’s kind of selfish if you think about it, but it’s not like we’re not allowing other ska bands. It’s just hard to keep one together. We are all at the right age and the right frame of mind. It’s not the easiest band I’ve ever been in, but it’s definitely the biggest one. We’re adults with adult lives and we make plans. There’s no, excuse the phrase, “fucking around”, you know? We come, we play, and we have goals we need to attain.

The running joke for a lot of bands I talk with is that the only time they all get together is on the stage for a gig. It’s hard getting everyone on the same page.

Mike Geraci: It’s hard for any band out there to get everyone on the same page, but I think because we have a little bit more riding on our band these days we find ways to make it work. I play band dad a lot. Shall we say, I get a little authoritative. We get to go out and do cool shows with cool bands like Mustard Plug, and we have a record coming out on Asian Man Records. We don’t really have the luxury of fucking around. Everybody knows we have to work hard and if you don’t want to, then you don’t have to be here. We don’t really have the option of coming or not coming. It’s either you come or you leave.

How did the deal Asian Man Records happen?

Mike Geraci: Mike Park from Asian Man is probably the best guy in the whole world. When he sees something, it’s not just because he thinks it’s going to make money. Mike is really about friendships, he’s always been about people. You know, when he sees good people and good music, he knows when it’s time to put money towards it and help a band that’s obviously struggling. I’ve been in touch with Mike over the years and he’s already turned down three of my other bands.

Mike came through [Buffalo] with Alkaline Trio. He stayed at my house for the weekend, and he came to my mom’s house for dinner. Tony and Toni had never met him before so they stopped over and we got to talking. We don’t have the $5,000 we’d need here in Buffalo just to record ourselves. When Mike heard how much it cost, he stepped in and called Rick Johnson to help us out and to top it off he offered to pay for it. We just have to get ourselves to Michigan to record. It’s 100% written and we have 13 songs. Right now we are in the process of just touching up the demos to send to Mike, then I’ll call Rick and set some dates for the actual recording. We don’t know the title. We don’t know the album cover. Right now, we are just waiting to see what Mike says. And if Mike says it sucks, then we are back at trying to figure out what to do!

You’ve got some influential fans. The Abruptors recently appeared on the cover of Do the Dog. That’s impressive.

Mike Geraci: Yeah. That was a surprise. He used a picture from 4 years ago that had different band members, but that’s okay. Kevin [Flowerdew] has been a big supporter of ours since our first single, four years ago. He has been in touch with us over the years, just been super friendly and super supportive. He’s put us into The Dog many times, just never on the cover. We never asked. Kevin’s been doing his thing for forever and I trust Kevin knows what he’s doing, so I never questioned anything. And then one day he tagged me on a photo and it was that front cover and we were so happy.

The above links are Amazon affiliate links, which means if you buy anything from them after using the links, we will get a small share, which helps us keep going. That’s a good way to support us. Thank you.

The singles and EP have been released by Asian Man Records. They have a store, too.