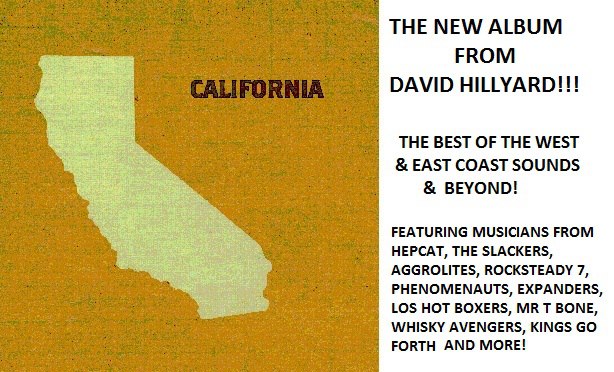 Have you ever taken part in a crowd funding project? You shouldn’t miss this one. It’s called “California” and it’s for an album already recorded by Slackers saxophonist Dave Hillyard with the help of Brian Dixon (former guitarist and producer of The Aggrolites) plus lots of Ska and Reggae musicians from Hepcat, The Slackers, The Aggrolites, The Rocksteady 7 and many more.

Dave Hillyard used to live in Los Angeles and play with Hepcat before moving to New York more than 20 years ago. So he knows his way around the US American West Coast as well as the East Coast. And he knows lots of fantastic musicians who joined in the recording.

At the REGGAE STEADY SKA headquarters, we already had the chance to listen to the album and can only state: It’s huge. It is also another testament of the high quality music that has been coming to the world from Los Angeles and New York. Building on a solid foundation, it’s only getting better with musicians who put their heart into every note they play.

You can help finish the project, fabricating the vinyl, the cds and packaging. Dave set a goal of 5.000$ for this project. If the goal will be reached, the people who helped will be rewarded as is stated on the funding page. It’s only a few days until deadline, so you better hurry up. Just a few dollars are missing. Maybe your money can make a big difference.

“The album is being made in pieces. Slowly the pieces come back to me. Layer after layer is pieced together. Its easily the most complex arrangements I’ve ever done. But somehow, probably because of Brian, it’s sounding natural and organic. The songs (even the instrumentals) are story driven. Everything is centered around the lyrics. The instruments serve the greater story“.

Go here to read the story of “California” and see all the details: https://bigtun.es/projects/index/5

Thanks for supporting quality Ska, Rocksteady and Early Reggae music.

“California” will also be on the shortlist for the Album Of The Year 2013″ poll here at REGGAE STEADY SKA. To make sure you stay update on all our activities including album give aways and free downloads, we recommend you sign up for our free newsletter.