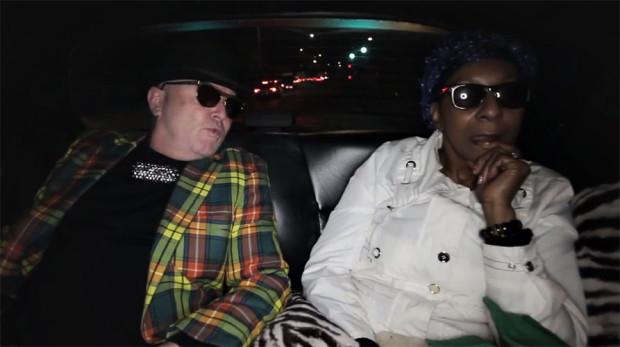 When the Ska scene became a global phenomenon in the mid-to-end 1980s, there was only one downer for the excited youngsters around the world: The generation of 2Tone musicians had moved on to other styles, mostly Pop.

Back To The Roots

It’s great to see that more and more of the big names come back to their roots. The Lee Thompson Ska Orchestra (with two Madness members Lee Thompson and Bedders) are just one example, Horace Panter (of The Specials) also formed a lineup that plays old school classics, The Uptown Ska Collective. Plus: The Specials as well as The Selecter and The Beat are touring heavily with sets from the 2Tone days.

„Bangarang“ is the second video taken from Lee Thompson Ska Orchestra’s debut album „The Benevolence Of Sister Mary Ignatius“, the single will be released on March 24th 2014. Our questions to you: Who can get Reggae legend Dawn Penn (No, No, No) to say Yes to a ride through London, in a cab with a tiger painting and black plush interior? Who can get the world-class Irish accordionist Sharon Shannon to join his lads on stage? Who has definitely shipped a must-see video to the Reggae Steady Ska community? Answer to all three: Lee Thompson. The album “The Benevolence Of Sister Mary Ignatius” is available at amazon (affiliate link). Also check our interviews and receive a free download from Lee Thompson Ska Orchestra.

One question remains: Who or what is a “Bangarang”? You can learn all about the background of the evergreen tune from the two people who wrote the song in the first place: read our interviews with Stranger Cole and saxophonist Lester Sterling.

The video to “Bangarang” is also on the Reggae Steady Ska playlist called “Video Of The Year 2014” where we collect all the official music videos from Ska Rocksteady Early Reggae artists. We do this, because we love a good music video and we want to give an overview of all the talent out there. At the end of the year there will also be “Video Of The Year 2014” votings on our website. If you have videos to add, just write a comment, shoot me an email at joachim@reggae-steady-ska.com, or (which would be the coolest thing) fill out the form for video submission that we set up. Also have a look at the playlist of videos from 2013 (in the sidebar). Lots of cool clips from all around the world. I bet you will discover something new.