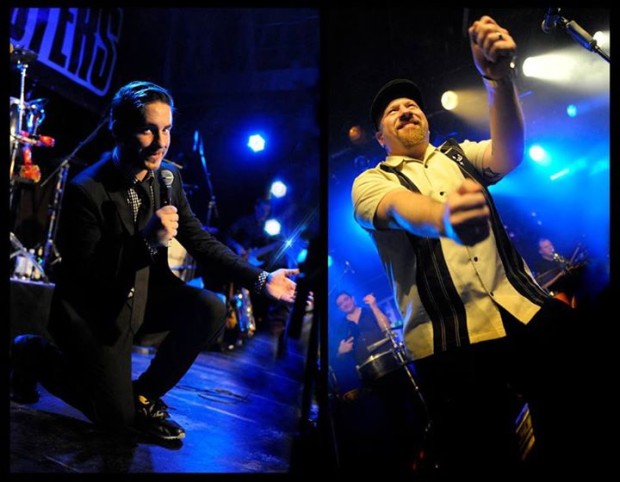 This is a joint venture that can mean a big push for the German ska scene. Richie Alexander, the internationally renowned jack-of-all-trades (Dr. Ring Ding Ska-Vaganza), becomes an official member of Germany’s most prominent Ska band, The Busters.

The annual Busters Winter tour 2013/2014 will feature Richie as a full member for the first time and has been aptly dubbed “Vier Fäuste für ein Summertime” (English: Four Fists for a Summertime), in allusion to one of The Busters’ early hits. Richie will join, starting December 26th 2013. Find the list of tour dates further down. While their latest line up addition will sure not threaten The Busters’ impressive ongoing crossover success in Germany, the big question for REGGAE STEADY SKA readers will be whether Richie Alexander can help The Busters tighten their connection to the global Ska scene, and bring back glorious early days of hits like “Summertime”.

Time to talk with Richie Alexander.

RSS: How did the idea of you joining The Busters come up? What was your first reaction?

RA: On the previous tour in winter 2012/2013, I was their special guest as a DJ before and after the shows and had a guest spot within the show, where I was accompanied for a few of my own songs as well as a cooperation on one of their tunes. Because it works well both on a personal and musical level, the band asked me if I would be available for the next winter tour as well. And for possible recordings. And for some other things. That’s when it came to the decision to make me a member of the family…

RSS: Can you describe your relation with The Busters from the first time you heard about them until today?

RA: When their first album “Ruder Than Rude” came out, I listened to it non-stop. The first longplaying record of a Ska band from Germany. I went to see shows, and loved it too. Being from the same scene, there has always been a lot of contact between us. They mentioned me in a skit on one of their albums, I recorded a song where I was dissing them in a playful manner (“Who dem want bust?”), after that, I was invited to cooperate on their album “360°”. I sometimes opened and closed their shows as a DJ, and later, recorded some music with their Saxophonist Mathias.

RSS: What is it you like most about The Busters?

RA: Good people, a high level of musicality and professionalism. And the fact that they are from a different region in Germany than mine makes them exotic enough to be interesting for the scientist in me.

RSS: What would you like to add to the band?
RA: I am looking forward to join forces and talents. No need to add a lot, as the band has always been known for its diversity. I can probably contribute a bit more of Jamaican vocal styles…

RSS: The Busters now have two singers/front men again. Any particular song by The Busters you would
love to sing?

RA: There are many songs I really like – especially the ones I grew up with from the first albums. So I’d probably pick from there…

RSS: Are there already plans for new recordings?

RA: Yes, we are currently working on recordings in different studios, crossing more musical and geographical borders than before…

RSS: How do you expect the songwriting process to be? Have you already some songs in mind that could fit The Busters?
Yes, and I am looking forward to explore some styles that I couldn’t do with my more traditionally playing bands. The faster and more “rocky” style.

RSS: What are the next steps with The Busters?

RA: Working on the recordings, composing, and then there is the large tour next winter. Get ready for a new album!

RSS: The Busters seem to have worn out quite a lot of front men. What could be a good strategy to stay on top?

RA: As long as it works musically and we all feel like a family with the same goals, we are on the safe side. That is all there is to it.

Vote the Video Of The Month November 2014