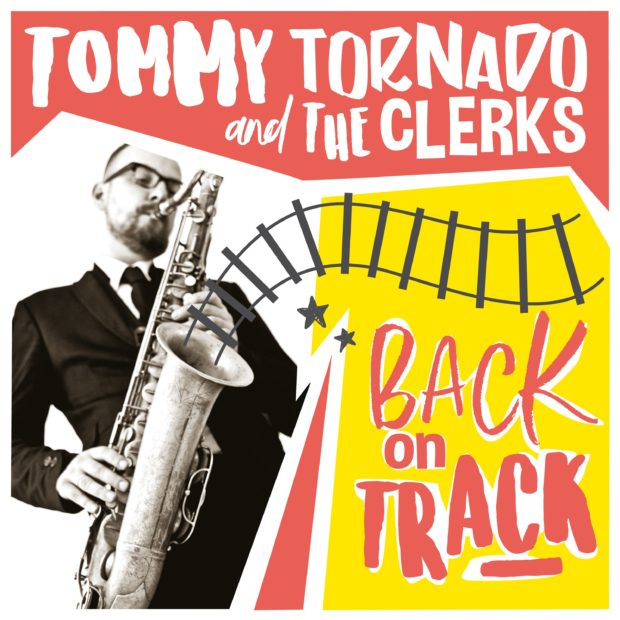 Tommy Tornado & The Clerks – Back On Track (Soulfire Artists)
This record has been a long time coming. Its story began at Freedom Sounds Festival 2014 in Cologne. Tommy Tornado, the Dutch top saxophone player, and German ska band The Clerks had been asked to team up and perform the tunes from Tommy’s fantastic albums „Sunrise“ and „Cool Down“ (Pork Pie Records). What was striking was how a band like The Clerks, formerly labeled as “high-pitched ska”, was able to deliver such a massive reggae set. Tommy himself was so excited that the plan was set to do a whole album together, although on his Dutch home ground there was surely no lack of talented musicians. Now it was (only) down to finding a way into the studio together, which proved to be the hardest part. On Tornado’s side, more than 100 shows every year with the Jazz Comedy project The Busquitos, with travels to Ireland or Russia, didn’t leave lots of capacity for other endeavours. And The Clerks were not idle, either, among other things recording the amazing album „The Night I Came Home“ with London Ska legend Arthur Kay. Sometime between 2014 and now, they obviously have succeeded in syncing their calendars, so that we can talk about the album “Back On Track”, which in brief is “a scorcher.“

Tommy Tornado’s tenor playing is in the vain of ska pioneers like Roland Alphonso or Tommy McCook, adding new accents that are so snappy rhythm wise, if the band stopped playing, you could still dance to his notes. Plus, it seems as if he could improvise all day. Thus, tunes like the opener hardly need a fixed melody. On top of his styles come buttery brass riffs, the mighty rhythm section and instrumental compositions, some of which like „Bari Bari“ and „Downhill“ would have been a good fit on old Rico Rodriguez albums. Other tunes (Silver Dollar“) are upbeat and Gero Kuntermann’s lead guitar is given more space. There is only one vocal track, New York legend King Django makes an appearance on „Lively Stroll“, where he does it like Judge Dread did back in the days. „Back On Track“ is rounded up by the fine mixing of the Dubcreator (from Amsterdam) who sets little dubby effects in the main mixes and adds three dubs at the end. It would be cool to have him present at the two record release parties ( October 4, 2019, November 23.1. Haarlem) In any way, it’s time to celebrate this release!

What do you think of “Back On Track”? Let us talk about it in the comments.