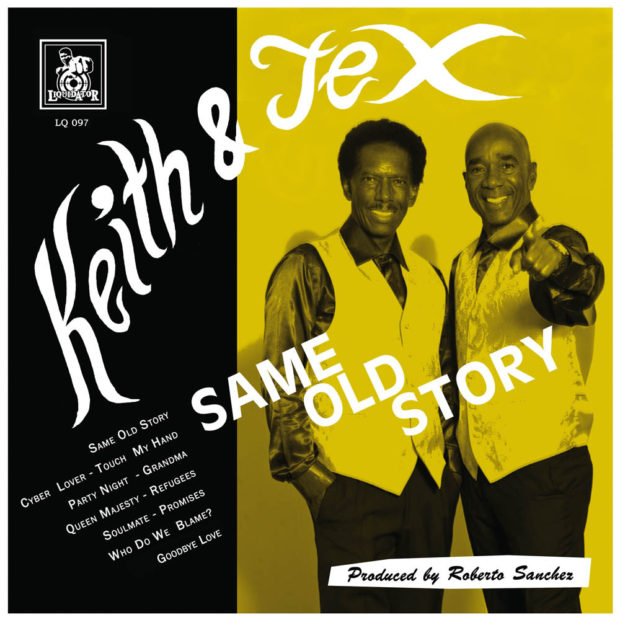 Artists who want to revive the spirit of the Jamaican rocksteady era of the 1960s have two top options today. Either you call Brian Dixon (producer of Western Standard Time, formerly of The Aggrolites) or you go to Spain to Roberto Sanchez (Liquidator Music, Alpheus). Keith & Tex, best-known since the 1960s for their classic “Stop That Train“, went for the latter. The album “Same Old Story“ shows that the decision was excellent. The resulting eleven tunes sound as if they have been there forever, which isn’t completely wrong, since some of the riddims Roberto used on “Same Old Story“ are originally from Phil Pratt productions and have been the foundation for some hit tunes for Alpheus’ two albums with the Spanish producer. The lyrics, however, are all new and deal with matters of today, as the song titles “Refugees“ and “Cyber Lover“ hint at. As early as 1970, Keith & Tex had secured their place in the history books with tunes like “Stop That Train“ and “Tonight“ for producer Derrick Harriott. Later on they both left Jamaica for the USA and Canada, to go into “proper“ jobs for the next decades. Fast forward to 2013, and Keith & Tex returned to the stages. What their first comeback appearances at ska and reggae festivals lacked in numbers of hits, the duo more than made up for with smooth and strong harmony vocals. The crowds encountered no shaky pensioners, but blooming best agers. Hard to believe how people with such a history could appear so fresh. Today, Keith & Tex can hardly handle all booking requests, from Japan to Germany. “Same Old Story“ will make sure that they don’t get bored on tour. The title tune, as well as “Goodbye Love“ feat. Bunny Brown, are perfect additions to their set of evergreens. More reasons to look forward to many more shows to come.