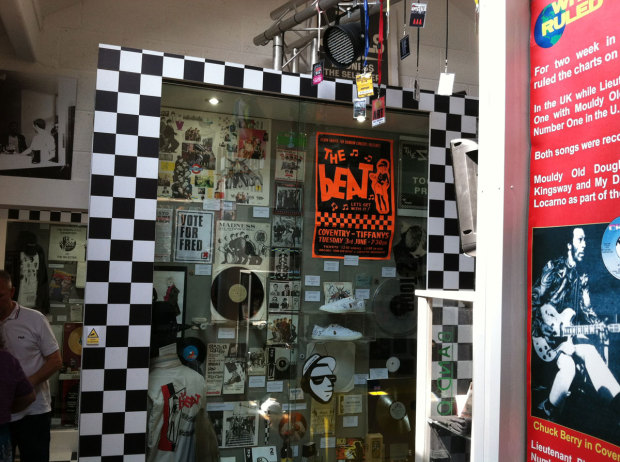 “Did you meet Neville?”

It was an unusual greeting, but it was my first trip to the Coventry Music Museum and there was a chance that it was simply the way things were done there. I sorted through a pocket of change for the £4.00 admission for me and my wife. “Neville who?” “Neville Staple? From The Specials? He was just here. Did you meet him?”

Meeting one of the people who fundamentally influenced my life in a museum dedicated (in part) to the lifestyle I have long embraced would have been the kind of story I’d be telling over drinks for the rest of my life. But no, he and his wife, Christine, were gone before I arrived, off to a rally in support of The Sky Blues, the Coventry City football club that may or may not have been leaving the city for reasons that I was explained but unable to grasp. Yet despite just missing Neville, I felt that Coventry could still be the highlight of our three-week, four-country European vacation. Not everyone would agree.

In his 2013 Great Britain guidebook, travel expert Rick Steves writes, “I wouldn’t go out of my way to visit Coventry,” adding that the city, “isn’t pretty,” but that it’s a good example of “normal, everyday, urban England,” the tourism equivalent of saying she has a great personality. But since the same kind of thing could be said of my hometown of Rochester, NY, I was willing to ignore the expert and go out of our way to see the place. Coventry is the birthplace of The Specials, the place they launched 2-Tone Records, and it was home to The Selecter, Reluctant Stereotypes and rabid ska fans. Rick Steves may know travel, but he clearly doesn’t know ska.

The Coventry Music Museum (CMM) is the brainchild of Pete and Julie Chambers, and no doubt there’s a fascinating story as to how it all came together and of the many dedicated volunteers and supporters, and I would have loved to hear it from John and Julie themselves, but they were at the same football club rally that Neville was attending, so I’ll skip over that.

The museum is housed in a clever little corner lot with a winding walkway that leads to the museum entrance as well as to the two independent shops and the café. The museum’s collection is on the second floor (hence the appeal for a lift) and the only thing you need to know is that if it has to do with the 2-Tone era—the bands, the music, the style and the history—it’s here, a pretty much name-it-and-they-got-it type of exhibit that consumed a couple of well-spent hours of my life. To put it in perspective, I once traveled four hours to see an exhibit on 2-Tone at the Rock & Roll Hall of Fame in Cleveland. That entire exhibit would have fit easily in one of the smaller display cases at CMM. And the stuff at the Rock & Roll Hall of Fame? The bulk of it was borrowed from CMM. Simply put, if you love 2-Tone, you must see the Coventry Music Museum.

Simply put, if you love 2-Tone, you must see the Coventry Music Museum.

My interest in Coventry was focused on ska, but the city has a rich music history and the museum does a fine job putting the other bands and musical eras in the spotlight. Those artists include country/easy-listening singer Frank Ifield, Hazel O’Connor and The Enemy (a.k.a. The Enemy UK in the states). It was also where 80s new-wave band The Primitives started off. Lead singer Tracy Tracy’s parents were volunteering at the museum the day I visited, pointing out that their daughter had been at the museum the previous weekend and that, by the way, I had just missed meeting Neville Staple.

There are two competing but complementary shops at the museum, a memorabilia shop run by Suky Singh, which features plenty of 2Tone collectables, as well as sports collectables, and there’s a small art gallery on the second floor. Bernard Holden and son Geoff’s shop has a good collection of shirts and other clothing items. Both shop owners seemed more eager to talk ska than make a sale, but in the end they both did well by my visit. And if Rick Steves had dined at the Two Tone Café, located in the same cluster of shops, he would have had much better things to say about Coventry. Alfie and Angela Knight served up the best Caribbean cuisine we’d enjoyed since living in Trinidad, and you can’t top the décor.

Pete Chambers was also the driving force behind the 2-Tone Trail, a series of 11 it-happened-here plaques throughout Coventry that tell some of the history behind the music, from the site of the iconic Special photo session, to the Lanchester Polytechnic (now Coventry University) student union building (now offices) where Rat Race was written, to The Hand and Heart, the now-closed (trust me) pub where The Coventry Automatics/The Specials played. Local mod/ska-phile Pete Baily served as our impromptu tour guide, leading us to half the plaques and a decent pub.

One of the plaques—51 Albany Road, Jerry Dammer’s old apartment and the world headquarters of 2-Tone records—was close to our hotel, which was also close to a decent pub. And it was on the parking garage of our hotel—the Ramada—where The Coventry Automatics did their first photo shoot. By comparing photos on my phone to the vantage points in the multi-story garage, I found the exact spot the shots were taken. Or least that’s what I’m telling myself.

So to re-write Rick Steves, I would (and did) go out of my way to visit Coventry. It may not be the prettiest city, but it has its charms. The people are friendly, the pubs are welcoming, and when it comes to ska, it’s pilgrimage-worthy. Plus, you just might meet Neville Staple. But probably not.

All images in this article © by the author.