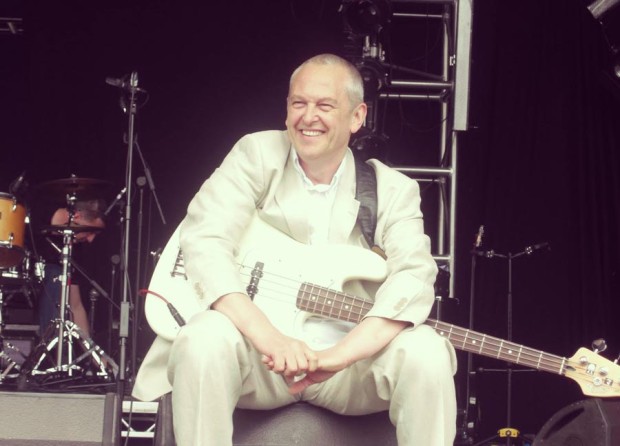 Read part 1 of the interview first

With a crisp, bold palette and a sharp eye for iconic images, Horace Panter has earned both recognition and respect in the contemporary pop art scene. But it was music, of course, that first put this Coventry-based artist on the world stage. In part two of our interview, he talks about his musical influences, other music projects, living in Coventry and why U.S. fans of The Specials need to dig out their passports.

RSS:We talked about art influences, let’s talk music influences. Why the bass and what influences do you bring to your sound?

Horace: I think it’s all because I’m not a guitar player. It was the old story, especially in Britain in the ’60s—Three mates got together to form a group. The clever one was the lead guitarist, the not-so-clever one was the rhythm guitarist, and the really stupid one played the bass. It was like, one note, no chords, four strings, you know? I’ve always been more interested in drummers than I have been in guitar players. I kind of think in terms of drums. I’ll invent a bass line, but I’ll have in my mind what the drums are going to do. That’s what the rhythm section does. I relate more to drummers than I do to guitar players, yes? So the rhythm is probably more important than actually getting the notes. Which, if you’re playing dance music or funk or whatever, as long as you’re hitting your note when the bass drum is going thump, then that’s going to work. I mean, that’s the essence of a lot of that funk stuff, isn’t it? The bass locking in with the drummer.

Then I kind of got into blues and started realizing that there are patterns, that sort of walking base, that sort of thing which is the essence of what goes on in ska. That is kind of twisted around a little bit. The first and the fifth kind of stuff. That makes sort of a simple reggae pattern. Then going into sort of like, getting a bit more music. Listening to Bob Marley, Ashton Barret is incredible. He was the musical director of that band. You listen to the bass line of “I Shot the Sheriff“, it’s not a bass line, it’s a symphony. It’s absolutely fantastic. There centuries of African drumming in that bass playing. It’s melodic, but it’s got groove and there’s loads of space in there, too.

That’s the thing. Also, with the bass player, it doesn’t matter if you’re not playing all the time. You can leave spaces in there. I think it’s the most difficult thing, especially for young musicians, to be on stage and not play. That’s why The Specials have such a hard time doing dub. They don’t realize that dub is just bass and drums. Every once in a while, there’s this funny noise. The only time people know when The Specials are doing a dub is when the bass doesn’t play and the bass should be playing all the time. I think that’s how that evolved—by listening to different styles of music. But to be honest, mainly blues, soul and reggae. I consider myself a very rhythmical player as opposed to a melodic player.

With your other band, the Uptown Ska Collective, you play a lot of Skatalites covers. Do you have a favorite Skatalites song?

Crikey. Not really. No. I’ve never thought of listening really carefully to lots of Skatalites tunes. Dick Tracy. Yeah, I’ll go with that, I like that. That’s one that sort of sticks in my mind. We don’t play it in the Uptown. The Uptown Ska was basically the people in The Specials who aren’t in The Specials, like the keyboard player and the horn section.

I had a kind of Coventry-based equivalent of this about 10 years ago, which was wonderful. But the standard of musicians wasn’t great and we didn’t get too many gigs. Now, having a fair amount of time off and meeting this new load of players, it just seemed like the thing to do. We don’t play regularly. We’ve only done three shows this year, but they’ve been fantastic shows. It’s great. Are you familiar with Louis Hamilton, the racing driver? With the guys that we use from The Specials, it’s like we’re hiring Louis Hamilton and asking him to drive a forklift truck. So, these guys, when they cut loose, it’s like “wow” they are absolutely fantastic. You’re right, it’s jazz. They theme and then everybody improvises, do the theme and finish. But it’s got a heavy offbeat on it. It’s wonderful, we played a couple weeks ago, a warm-up concert for the concert we’re doing in Dorset in a couple weeks. It was fantastic. It was absolutely brilliant. This little bar … It was nice, like a Sunday afternoon. This whole bar was absolutely bouncing. It was absolutely brilliant. Great fun.

Ever try playing a big upright bass like Lloyd Brevitt?

My son has one. He’s the musician of the family. I haven’t got the ear. I’ve had two marked fret-less basses in my time. They sound great when I’m on my own but when I’m playing with other people it’s just not right. I’ve sort of bowed to the fact that I’m a fretted instrument guy. If they made a fretted double bass, I think I’d probably be interested in that.
What’s next for the Uptown Ska Collective?

We’ve been doing some recording. We recorded a six-track EP, which is phenomenal. We finally got around to recording it over the summer and it’s just been mixed. It is great, I’m really proud of it. This was the six-track thing. I think it’s going to be released on 10-inch vinyl and cassette. Lynval phoned me up last night because he’d finally got to hear it. He was complimenting me on how good it was, which is nice. That will be out … I don’t know when that will be out!

In your autobiography, and in many online interviews, you talk about your friendship with Lynval Golding. Would you have met if it wasn’t for The Specials? What’s your relationship like today?

We would not have met. I was at art college, sequestered away from reality. Lynval came over from Jamaica when he was 8 years old. He was the first black person that I ever met or that I ever talked to, I ever sat down and talked to. I must’ve been 23. He and Desmond Brand used to come around and give me reggae lessons, which is hilarious. Now, he’s over in England at the moment. We spoke last night, we met up last week … Specials business and stuff. We’ve become firm friends over the last 30 years. 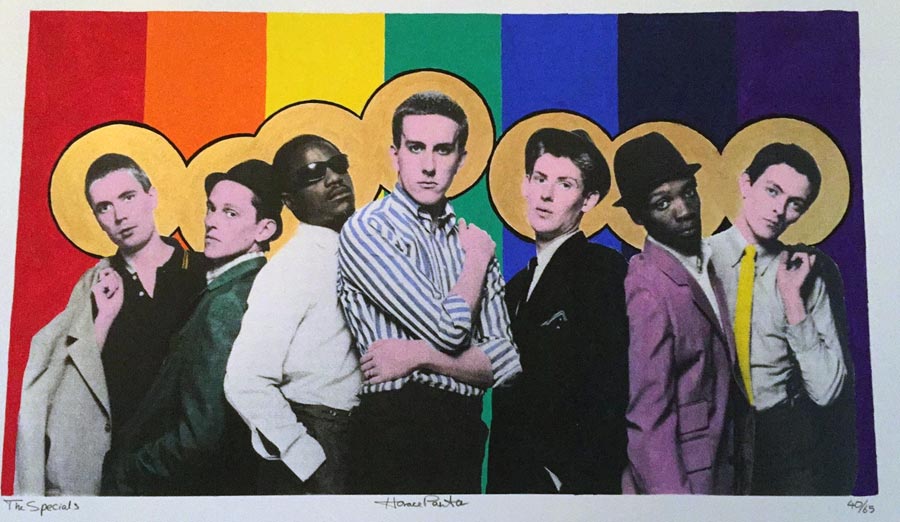 It’s difficult coming to America because it doesn’t pay.

I was afraid you’d say that.

We’ve been two or three times and the shows have been great, but it’s a real expense. It’s not like we’re The Police and we can do everything in a U-Haul trailer and an Econo-Line. Last time we played in the UK, there were 11 people on stage. We could quite easily put that, you know pare that down to 8, but it’s just a lot. It’s an awful long way to go. I always remember talking to Dave Wakeling when I was in General Public, he was saying when The Beat toured America, it was like you spent the first five weeks of the tour breaking even and everything after that is profit. But that means you’ve got to be on the road for like two months. I think when you’re 25 and you need to sleep 3 hours a week, that’s fine. That’s when I don’t feel like I’m 25 again. We are all nearer retirement age than voting age.

You’re still based out of Coventry how do they keep you down on the farm after you’ve seen Paree?

Living in Coventry, I can keep my feet on the ground. I’m known as a school teacher, I haven’t got a scene around. A few people will go “Oh my goodness! Did you know who that was?” Then other people will go “Yeah, that’s Horace. Leave him alone.” Which is nice. It’s nice going to Paris and doing all that stuff, but it’s nice to come back home again.

It’s funny, it [Coventry] was kind of the Liverpool of England, if you like, in 1980. It’s strange because The Specials really do relate to the sense of place. I don’t think The Specials could’ve come out of any other city then Coventry. Although only three of the members of the original band were actually born there. It was such a melting pot, culturally and musically. If you were a black guitarist or a white guitarist, it didn’t matter. You got the gig because you were a good player, not because of the color of your skin, you know? Jerry, Neal Davis, they played in bands with Silverton with Charley Benbridge and Lynval Golding. There was always this sort of cross pollination of music.

I think there was a big thing because Coventry was destroyed by bombs in the second world war. The call went out in the late ’50s to sort of rebuild the city. People came from all parts of the British Empire to do that. You had a lot of Asian people, Indian, people from the Caribbean. And Irish and Polish and Greek and all sorts of stuff. I remember Neal Davis saying to me, when he grew up there were Greeks, Poles, Irish, Caribbean, Asian people in his streets. My wife says where she lived, her best friends were from the Caribbean or Irish or Greek so, whatever. I think Coventry was a multicultural city before multiculturalism was invented, really. People just got along. They had to, they all went to school together. I think that kind of set the seed for it to work musically, as well.

You keep busy, that’s for sure. The more I was researching you, the more I wondered if you ever took any time off.

I go on tour with The Specials to relax. My idea of relaxing is doing something. I’m just standing here looking at the state of my garden or my yard and it really needs work. But I just haven’t got the time.
Videos
Uptown Ska Collective:
Guns of Navarone
Eastern Standard Time

Horace with Tim Armstrong:
A Message to You Rudy

The Specials
Doesn’t Make it All Right (Live at Bataclan)

Photo credit for the shot of Horace on stage: Adrian Andrews