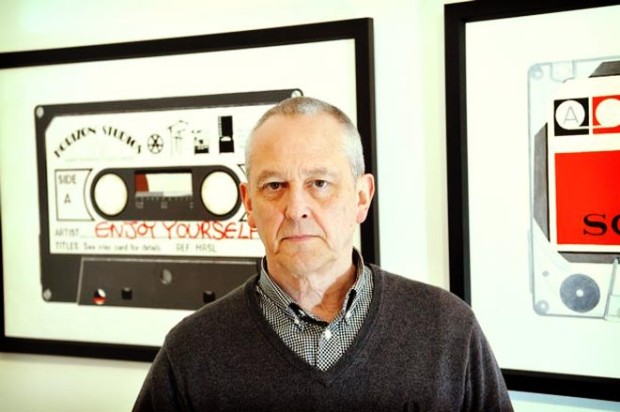 It’s not a coincidence that so many band bios start off with a version of “we met in art school.” Cram a bunch of young, creative people together in one place and odds are something special will come out of it. And that’s exactly what came out of Lancaster Polytechnic (now Coventry University) in the late 1970s. As the bass player for The Specials, Horace Panter enjoyed the kind of success art school bands dream about.

And today, as an artist, he’s enjoying the kid of recognition and success art school teachers dream about. In part one of the interview, he talks about the sources behind his artistic style(s), the connection between art and music, and his secret for staying 25 years old.

RSS: When you consider everything you’ve been doing lately—your art work, your collaborations with all types of different artists, your music, not just with The Specials, but with the Uptown Ska Collective—it seems like you’re enjoying the most productive and creative era of your life.

Horace: I wouldn’t deny that. Definitely not. I was a school teacher. I thought I would retire as a school teacher. I got the call from Lynval [Golding]. The Specials were reformed in 2009. I thought, OK, I’ll take a year off from school teaching, then I’ll go back to being a school teacher. It’s absolutely astonishing that we’ve been able to last as long as we have. But we haven’t done it in such a high-intensity way that we did it back in 1979. There’s been a lot of time between tours, and I’ve been using that time to establish an art career. Also, The Specials won’t last forever. So that, hopefully, when that declines, there will be an art career to replace it. I’ve always played music. Even when I was a school teacher, I had a little blues band that played weekends. Blues2Go. A small band with a big carbon footprint.

Why do you say that?

Well, because there’s four of us and we all travel to the shows in our own cars. I’ve got my equipment with the PA speakers and the singer’s got his gear and the amp. Then the drums, you know. It’s like, we don’t take up a lot of room, but we burn a lot of fuel.

The one and only time I’ve seen The Specials was a couple summers ago when you played New York City on the Pier 45.

Yes, that was a good show.

Did you take in any museums when you were there?

I went to the new Museum of Modern Art because I hadn’t been since it had been rebuilt. That was great because they had a lot of Claes Oldenberg stuff. They had Henri Rousseau’s picture there, The Dream, which is great, and this whacking-big Barnett Newman that I like. I went to the Whitney [Museum of American Art]. They had Edward Hopper’ drawings, which was really nice. That was really good.

Talk about the Blues and Jazz series you created.

They start life as a 12-inch square board. Then they’re enlarged so they’re twice the size. So they’re two-foot square. Then I’ll work on them. So it’s a combination of sticking objects on the board, then there’s paint on there, then there’s a collage of photos. It’s a kind of mixed media thing, but I like the idea. Usually when you do an original painting, you make the print smaller. I use the opposite effect. It’s got like a billboard kind of effect. When you get up close to a billboard, you see all the pixels and all the dots and that sort of stuff. That was the idea. Each work’s got this kind of long-distance, across-the-room look. When you get up close to it, you can see that there’s a big list of names like all the people who played with Muddy Waters or all the songs—or a majority of the songs—that Bo Diddly played and bits of lyrics and all that kind of stuff. It kind of works on two levels.

I didn’t want to just paint a nice portrait of Muddy Waters. I like to try and paint music, you know what I mean? Or the impact that it had on me. I love the blues. Especially the Chicago blues guys, the majority of whom, you know this, were born in Mississippi or Alabama and likely traveled up highway 61 to a different type of poverty. I like the fact that they then amplified their music. It sort of makes the hair stand up on the back of my neck when I think of Hound Dog Taylor and Muddy Waters and all those guys. I wanted to try and get that across. That’s why there’s maps involved in the pieces, as well. I think that sense of place is really important. It is to me anyway. It originated in Mississippi and it ended up in Chicago.

Let’s talk about your Americana Series. Looking at the artwork, I see a bunch of different influences—Edward Hopper, Andy Warhol. David Hockney. What do you see?

I think with the Americana, I’m channeling my inner Edward Hopper, I suppose. I think when I started those, I realized that the subject matter—the signs and the motel signs and the diners and all that kind of stuff—that what I was really doing was what artists had been doing for centuries. That’s just basically painting light, the way that the light is so intense and strong over on the west coast. The shadows and that sort of intensity, I think that’s where all the excessive color comes from, as well. Personally, I just loved the signs, as well. You would never get anything like that in England. It’s kind of weird. A few people from America have said, “Sometimes it takes somebody who isn’t part of that culture to come along and describe it.”

Speaking of describing things, your style in many of your works is very stripped down and bare. The same can be said for the way bass players approach music. So I’m thinking maybe because you’re a bass player that you approach your art like this. Or am I full of shit?

I think you’re full of shit there, yeah. No, I never thought about that. You know, it’s an interesting comment. I love traditional iconography. Especially the Byzantine stuff and the Russian stuff where the central figure was always large in the picture. Right in the middle. I love the fact that in iconography, the rules of our perspective and light and shade are just kind of thrown out the window, you know? There are no shadows and everything, and I kind of like that.
I can kind of relate that back to music. It’s like, here are some rules. Let’s break them. I think a lot of the Icon series was sort of based on the same rules or non-rules from icon painting. I think it just sort of developed, you know? I’ve always liked flat color and like the pop artists you know, Robert Indiana, Warhol, Lichtenstein and that sort of stuff. I’ve always like, that sort of graphic approach. I wanted to do work that was, that could be appreciated by regular folks. I didn’t like the elitism when I went to art college. It was all very elitism and conceptual stuff that the majority of people would go “What the fuck is this?” But whereas, if you paint a picture of something that somebody can recognize, you connect, everybody can connect with it. That’s why I kind of liked the pop artists because it was using everyday symbols as the imagery. Again, it goes back to Henri Russo.

That’s the thing about iconography, it’s art with a purpose. I love the fact that you want to travel from Novgorod to Moscow and not get eaten by a bear, take this picture with you. Or if you live in Haiti and you want your crops to grow good this year, draw a picture in the dirt with coffee beans. That’s sort of using art for a purpose. That really appeals to me.

Yes. That whole punk thing was a total sort of ground zero for music in England in the late ’70s. You didn’t have to be as good as Carlos Santana when you got on a stage. You could learn two and a half chords, and that was fine. It was more the energy and the optimism that you could get out there and make a noise. There was an audience there that was only a little less advanced musically than you and they would appreciate it. It was fantastic. It was really good.
You could go out in Coventry, like four nights a week, and see bands. Some of whom were absolutely dreadful. Some of them were perhaps not so dreadful. But the atmosphere was tremendous. There was a real sort of positivity going on. I just thought that was terrific. I was lucky because I could play. I was slightly older than that original punk generation. Terry Hall was an original punk. He grew up with the Sex Pistols and The Clash. He was 19 when The Specials hit, whereas I was 25 or 26. I’d actually learned to play, I’d been in show bands. I had played social clubs and stuff like that. I knew how to play. It wasn’t like I was learning how to play on stage like a lot of these guys.

You’ve said that when you step on stage, you feel like you’re 25 again. Is it almost better now, playing music live, than it was when you were younger?

I don’t know. I suppose, I wouldn’t say it’s better, I’d say it’s different. Perhaps it’s nowhere near as exciting because back then in 1979, it was the big mission. We were spearheading this thing or whatever. Whereas now, it’s a lot more comfortable. You’re not going to have the crowd invasion and we don’t set ourselves such an enormously punishing schedule. That’s a lot better. But I suppose the adrenaline is still there and there’s still the fact that we’re The Specials, anyway. There’s two and a half to three thousand people out there willing us on to be great. That’s such a tremendous feeling. It’s kind of the same when the blues band plays and there’s only 15 people. Three of which are listening. It doesn’t matter, I’m still playing and I’m playing for the other guys in the band. I just think that the whole joy of being able to play music to people is a fabulous privilege.