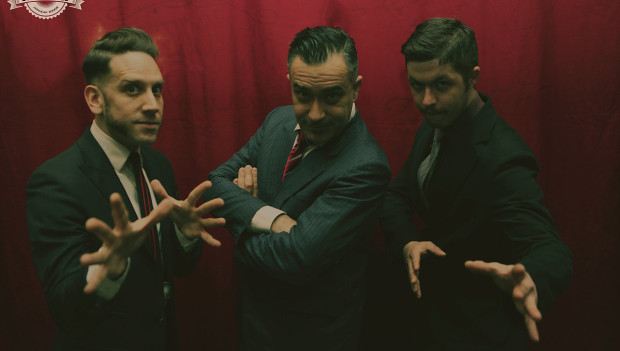 He is one of the most-loved ska musicians ever to come from Europe. You may know him from The Bluebeaters (with and without Giuliano Palma), The Young Lions or New York Ska Jazz Ensemble to name a few. RSS got the chance for a chat with Mr. T-Bone during the Freedom Sounds Festival 2016, where he was part of the gigantic Western Standard Time Ska Orchestra, and played with his new trio The Uppertones.

RSS: Is it right that you are not playing with The Bluebeaters any more?

Mr. T-Bone: I left for the second time. I left the band about eight years ago, because I wanted to do my stuff. And I did it. Then came the reunion of the band, and I joined again. But after two years, I realized I can’t stay in the same place for too long. I need to change. My musical need is to play with more different people and travel. That’s what I really need.

I thought that the record that you released with The Bluebeaters was very good. Do the others continue to play?

Absolutely. I think they are going to record a new album, and I’m going to play on the new album as well. They just started a tour a week ago and they got a lot of shows coming up in Italy. They are doing well.

And what’s up with The Uppertones? Is this your main band at the moment?

Yes, and I hope it’s going to be for the next 40 years, because I really love to play this music. I finally found a way to put together all the things I love: the blues, the jump blues, the ska, the boogie, the shuffle. Actually, this is the music the Jamaicans played before they started to play the ska. Because they listened to the music from the United States. What they listened to during the 50s was boogie and early rock’n’roll, jump blues. And they were trying to repeat that. That’s how ska started. And then reggae, and all the things we know from Jamaica. So the blues is the grandpa of ska.

Being in a small group gives you more space.

Yeah, that’s awesome, because we are just three people, we are three good friends, and it’s beautiful to tour together. It’s like being on vacation. And we like how everyone of us plays. So we enjoy every single note we play on stage, which is not normal. Normally if you go on tour, you like some things and you don’t like other things. With this band, we can’t wait to go on stage every night.

Did you know each other before?

I have known Peter Truffa, who is the piano player, for 14 years now. I first met him in 2002, for my first European tour with New York Ska Jazz Ensemble. He used to play with them. And we toured together with the New York Ska Jazz Ensemble for 2-3 years. Then he came to Italy to play with The Bluebeaters. He played with The Bluebeaters for 10 years or something. We are very good friends, we played together many times. And Paulo: He is a very good drummer. He’s very young, and he is so on fire. He also plays with me in Mr. T-Bone & The Young Lions, my old band. And until we started The Uppertones, he played with Giuliano Palma. All these bands are based in Torino.

With The Uppertones, do you get booked into other clubs than with your ska projects?

The first step we did was to propose the show to the ska scene, because that is the scene that has known me for 20 years, and it works. We already played more than 40 shows from this January to April, in the ska scene. The great thing about The Uppertones is that we can also play in Rock’n’Roll festival, blues festival, rockabilly festival. And we are getting there. This is the next step. Of course, we will keep playing with the ska scene, but we want to be open to the rock’n’roll scene as well, because we can do it.

I think in Germany people from the ska scene are much more open to other styles than they used to be 20 years ago.

So far, everywhere we go there are people from different scenes, and they all seem to enjoy the show. We need to give the show we play a name. But then again, we don’t need it. Boogie is something that my mum can dance to, and my son, too.

How did you transport the atmosphere from playing live to your studio album?

We recorded the first album this past October. We did it just like a live show. We recorded straight live on a tape. So the sound is pretty much like what we are doing live. Piano, drums, vocals and trombone. No overdubs.

That sound can be heard on album The Uppertones “Closer To The Bone”. And don’t forget to catch these guys live, if you can.