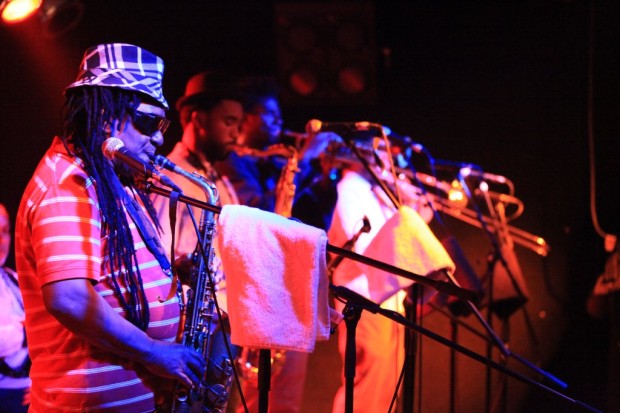 Next up in our interview series with members of The Skatalites is Lester Sterling. The only left male original member, the man on alto whose role in the band has been overlooked by many in favour of the stars on tenor saxophone stars Roland Alphonso and Tommy McCook. Read how Lester describes the production of the classic “Bangarang” (with Strange Cole) and much more.

RSS: Lester, you were a student at Alpha Boys School. Can you tell us about your time there? What kind of school was it?

Lester Sterling: Well, it’s a Catholic school. And it teaches academic skills, but also a lot of trades. You could learn professions like printer, shoemaker – or musician!

RSS: Did you choose to attend Alpha Boys School or were you sent there?

Lester: I was born in Kingston where my father always took me and my two brothers to “Coney Islands” where all the bands used to play. He told us that we had to be musicians when we would grow up. I knew a few guys who played in bands and they introduced me to playing music, so for Christmas we got these toy instruments to play on. At that time we were going to a different Catholic school, but my father tried to get us into Alpha because they specialised in music.

RSS: When you were at Alpha, did you already meet the other musicians that would become the Skatalites later.

Lester: Yeah, I met Don Drummond and Rico Rodriguez. Those guys were most interested in the music, like my brothers and me.

RSS: And did your brothers also go into music?

Lester: Yes. Keith [Sterling] played the piano, Roy [Sterling] played the trumpet. I actually started out as a trumpet player, too. When I left school, I joined up with different bands like the Glassbucket Band or the Copacapana Band, playing at the hotels on the North coast. Then I decided to make a change. I had been working in Montego Bay for about five weeks with Eric Grant & the Montego House Orchestra, but then the band lost the job, so I decided to go back to town.
Shortly after Eric called me to come back to Montego Bay, but by that time I already had bought a saxophone.

RSS: So you switched from trumpet to saxophone?

Lester: Yes. And I told my friend, I picked up the saxophone and I want to continue with it. And so I played at Vere John’s opportunity hour and so on.

Lester: When I played with Byron Lee, after the Skatalites, I actually played the trumpet and the saxophone.

RSS: When you recollect all the bands you played in, what was the best time for you?

Lester: Buoy, the best time? Well, funny enough, Luther Williams and his Orchestra at the Arawak Hotel. That was in the fifties when I was like 18. We played Rhythm & Blues and Jazz, Cha Cha and Mambo. At that time I ran into Roland Alphonso. He got me interested in Jazz. I learned a lot from Roland playing. It was good that I played in Jamaica Military Band, so I got a lot of practise.

RSS: When you played with all the other masters like Roland Alphonso, Tommy Mc Cook Johnny “Dizzy” Moore or Don Drummond, was there a lot of competition or was it more like friends playing together?

Lester: We were friends in a sense, Dizzy, Tommy, Roland and Don, but it was competition at the same time. [laughs] Everybody wanted to outdo each other…. It was good, though.

RSS: Is there still competition with all the younger musicians you are playing with today?

Lester: Not really competition, but we set a certain standard. So if you want to come and play with the Skatalites, you have to come up to this standard.

RSS: Doreen Shaffer told us that you keep the band together. How do you do it?

Lester: Well, I suppose I am a musician who is interested in music at all times and I know all the songs the Skatalites play and how they played them. I guess the guys enjoy how I play them.

RSS: How does it feel like on stage now that nobody’s left of the original Skatalites except for Doreen?

Lester: Strange in a sense, but then again, I have to be the one to hold up the hands and keep it going. All the music from Don Drummond and Roland and Tommy, it’s always around me. Sometimes I play parts that Roland or Tommy played. I heard what Don Drummond or Dizzy played, so I play that style. It’s still here!

RSS: Of all the recordings you’ve done, which one is your favourite?

Lester: Well, when you talk about Ska, there’s a song I made, Lee Harvey Oswald. Everybody loves that one and I love it too. But one of the biggest hits I made… [starts singing] Momma no want Bangarang… [chuckles]. That one really hits, you know?

In 1998, you received the Jamaican order of Distinction. What does it mean to you?

Lester: It was really important because it made me feel that I had reached a high standard of music in Jamaica. All that encourages me.

RSS: What is your connection to Jamaica today?

Lester: I usually go there once every year.

RSS: What do you think about the country nowadays?

Lester: It sometimes feels strange to me. It has changed so much in the last 50 years.

RSS: What exactly has changed?

Lester: So many more houses have been built since I left the country in 1972.

RSS: What made you leave the country back then?

Lester: Like everybody, I wanted to be in America, become really good as a musician. I listened to Charlie Parker, Dizzy Gillespie and Miles Davis. These guys played so great.

RSS: Did you play with American bands after you had emigrated?

Lester: Yeah, I used to play lead alto sax with the Jazzmobile big band. First Jimmy Heath was the leader and after that Frank Foster took over.

RSS: Who brought the Skatalites back together?

Lester: I restarted the band in 1978. I wanted to form a band and had to decide which name to give the band. I used to be in the Soul Brothers, the Soul Vendors and there already was a band called Lester Sterling & the Alley Cats, so I decided to better call it “Skatalites”, because there were no Skatalites around. I founded the band with a fellow called Eugene Grey.

RSS: And after you reformed the original band in 1984, did you stay together permanently?

Lester: No, it was just a few gigs, one in England, Crystal Palace, but then the band was shut down again. But Tommy McCook called me later and asked: Where are you based? New York, I said. So he finally came down and we played together.

RSS: What do you think about modern-day Jamaican music?

Lester: I listen to Dancehall and I like it, too. Sometimes when I am in Jamaica, I even try to play it. As long as the people enjoy it….

RSS: All this touring must be quite straining at your age. Is it still fun?

RSS: You and the other musicians invented this music more than 50 years ago on a little island in the Caribbean. And today you have people listening to and playing Ska, enjoying this music all around the globe. You can play to audiences in faraway places like Japan or Europe, how does it feel like, to be able to play your music in a place like Cologne, Germany?

Lester: It feels good and I am happy that people appreciate it and everybody’s dancing. It’s great!

RSS: And it’s great to still have you around, doing what you do best!

RSS: That sounds like a good title to this interview. Thank you, it was a great pleasure.

You can find the current album “Walk With Me” by The Skatalites at Amazon.

Also make sure to read the interviews with Doreen Shaffer & Val Douglas.