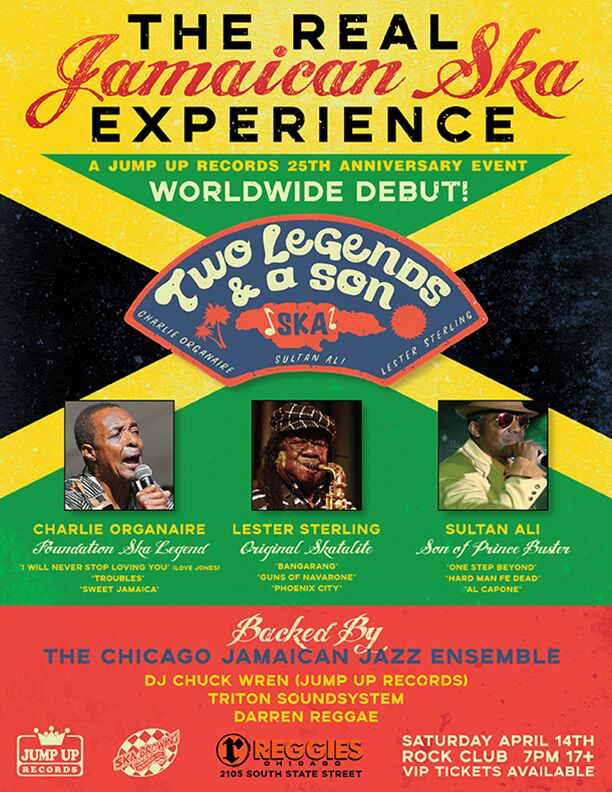 What this is about is best described by Jump Up Records: “TWO LEGENDS & A SON is an all star trio starring Charley Organaire, Lester Sterling (Skatalites), and Sultan Ali, son of Prince Buster. Hear the golden age of ska come alive once again in this once of a lifetime cabaret showcase, this electrifying set includes scorching classics from The Skatalites, Prince Buster, and Charley plus more favorite original ska hits reinterpreted and improvised by the trio. . The Chicago Jamaican Jazz Ensemble is an 8 piece ensemble that plays music in the tradition and style of early Jamaican Studio One dance bands. Before reggae, there was the celebratory music of independence in Jamaica. Music made for dancing, music that was Jamaican Jazz!

Drawing on musicians from Chicago’s diverse jazz scene the music honors tradition and looks to the future of the style. Many of the featured musicians are staples in the Chicago scene and can be heard with/on Swing Gitan, Fox’s Empire Series, Jennifer Hudson, The Drastics, and the Glen Miller Orchestra to name a few.
This is a one of a kind group in Chicago, this is the next generation, and we’re going back to the roots!”

We hope you have a chance to be there.
ChicagoJump Up RecordsPrince BusterThe Skatalites
Previous ArticleProducer Mitch Girio on his work with Jamaican singer Susan CadoganNext ArticleBuster Shuffle release new video “We Fall To Pieces”