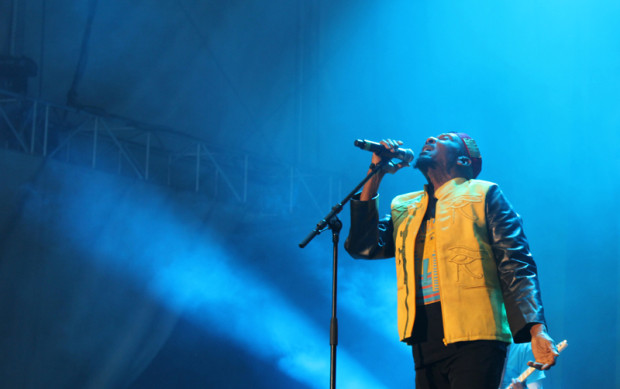 It’s getting dark on a Sunday night in July 2014, when Jimmy Cliff is scheduled to perform at the 29th Summerjam festival, as the highlight of the three-day event that goes down outside Cologne/Germany next to the Fuehlinger and attracts around 30.000 every year.

Cliff’s headliner status at one of Europe’s biggest Reggae festivals is well deserved, especially since he has been adding to his exceptional string of hits in recent times with the release of „Rebirth (2012), for which he even received a Grammy. Read more about „Rebirth“ here. After introductions from the presenter and a short set of his young band that comes fully equipped with a horn section, Jimmy Cliff demands the stage with a dynamic presence rarely seen even with performers half his age. It’s great to see the man still in top form after nearly 50 years in the business. All of Cliff’s major hits are included, earlier socially conscious floor fillers like „You Can Get It If You Really Want“, „The Harder They Come“ or, „Afghanistan“ (formerly known as „Vietnam“), as well as the timeless ballad “Many Rivers To Cross“, the cheesy „Reggae Nights“ from his discussible 1980s phase, next to his most recent works „World Upside Down“ and „One More“. The live versions sometimes differ considerably from the originals, but that’s cool, since now they come together as a whole massive rock of a lifetime achievement, that has few equals in the history of Jamaican music, or even in popular music in general.