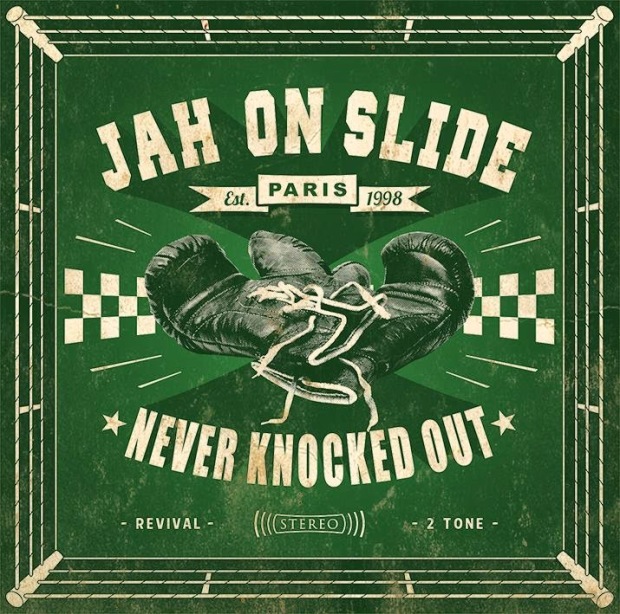 What’s the fuzz about?

Jah On Slide from Paris, France, operate in good 2Tone tradition mixing bouncing tunes with political messages. 2014 marks their 15th anniversary, and it seems that the best days are yet to come. With the help of an international booking agency, quite a few shows in Continental Europe are in the plans. Their fourth album, the first after a few years of silence, is a great trigger for more exposure. The sound on „Never Knocked Out“ is dominated by a fantastic lead guitar, raw organ licks, loads of fun choir singing and shouting, warm and lush horn riffs. Lots of melodic and rhythmic styles are being used in the songs.

… are when you listen closely to songs like „Oh Les Girls“ and feel how much attention was put into every detail of the arrangements. There is so much happening in the songs that you won’t get tired of them, once you appreciate the style that is quite unique actually today.

What do I not understand?

I wasn’t sure about the song „Stop America“, catchy as it is. I have no idea what the guys are singing in the verses and had concerns it might be too modest. But Jerome (one of the band’s driving forces) informed me that „it is ironic.“

Who will dig it?

This is an album for the smart Antifascist crowd, and a great fit for a night out drinking, dancing and simply having a good time. It also brings back memories of the 80s generation’s take on the 60s.

The opener: “Hey You Lover”

“Never Knocked Out” is available on Amazon.

Where to learn more …

What do you think about „Snapshot“? Let me know in the comments.