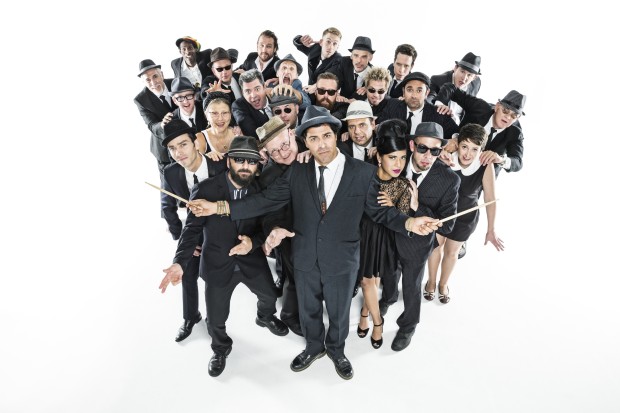 Everything about Melbourne Ska Orchestra (photo: Kane Hibberd) is big—big band, big sound, big talent and a party spirit so big it keeps all of Australia skanking. MSO is wrapping up an extensive (and expensive) tour of the country, promoting their debut album. We caught up with Nicky Bomba, the frontman  and force of nature behind MSO.

Like to listen to MSO while reading this? Here’s a little playlist.

Reggae Steady Ska: Give us the quick story on how MSO came together.

Nicky Bomba: We wanted to set a world record for the most horn players on stage doing the ska skank. We worked out a setlist, booked a venue and it was a massive success…sellout and hundreds turned away. We had so much fun we forgot the attempt. We could revisit it…

RSS: Whether you set that world-record or not, you bring a lot of musicians to the stage every show. What’s the current makeup of the band?

RSS: There’s an amazing sound to your self-titled debut album, an I’m-in-the-middle-of all-this feel that’s both massive and intimate.

Nicky Bomba: We spent a lot of time researching the best way to record the orchestra. Our initial recordings were in a smaller room which didn’t really capture the true harmonic energy that swims when so many people are playing together in one space. Our approach was a lot more classical and also lending an ear to the Gene Krupa Big Band Style of the 40s. Placement of the room mics and where that sat in the mix was über crucial. The musicians worked really fast and we were all “on.” Catering on site did help.

Nicky Bomba: Lygon Street is located in Carlton, an old school, inner city suburb of Melbourne that was the epicenter of the mafia-like shenanigans in the 80s. Lots of shootings, back-stabbings, excreta…straight out of a film. We wanted to write a song that defined a time and space. The gangster theme—and the questioning of it—is synonymous with the Ska ethic as far back as the 1960s.

RSS: There are 2 songs on the album that are a result of Think Tank sessions. What’s that about?

Nicky Bomba: Think tank sessions were an attempt to jam any idea and see what came up. Everyone was welcome. Again the musicianship shone through and it was the most productive rehearsal jam session I’ve ever had. The rule was, there are no rules.

RSS: Steel pan [also called steel drums] is such a perfect fit for ska, but MSO is one of the very few ska bands to feature a pan player.

Nicky Bomba: I played steel pan at the Nottingham Carnival in 2006 after having a 4-day crash course. I was honoured to be in the oldest pan float in the carnival so I learned from the true Trinnies. On my return to Australia, I bought me a new pan from Lennox Jordan and we became instant friends. We had a jam, he sat in on a Bustamento gig [another of Nicky’s bands] and I pretty much asked him to join…or at least to do as many gigs as he could. He’s third generation pan-maker, so his pans are spot on.

Nicky Bomba: It’s crazy, but it all seems to come together. On paper it’s a joke-a-rama, but even with a sellout we just manage to scrape through. We are presently looking for flight endorsements/donations, odd jobs and house painting tenders to fill the coffers. Dean [Hilson, tenor sax with MSO] is a good cook too and can do house parties at competitive prices.

RSS: What’s next for MSO?

Nicky Bomba: Tell our story for the next year to as many people as possible, release some more singles and clips…make sure we keep ourselves on our toes.