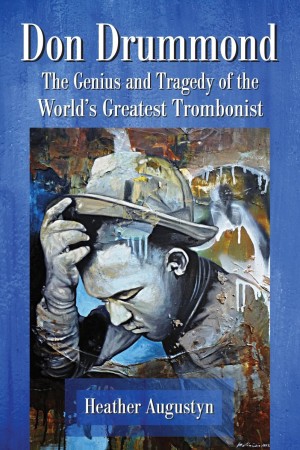 It’s an easy argument to say that without the Skatalites there would be no ska. And without trombonist Don Drummond, there’d be no Skatalites. Journalist Heather Augustyn , author of Ska: An Oral History  and the upcoming Ska: The Rhythm of Liberation, has written the first comprehensive biography of this founding father of ska. Don Drummond—The Genius and Tragedy of the World’s Greatest Trombonist covers all the aspects of his life, from his early days at the Alpha Boys School and his development as a musician through the murder of his, his trial, conviction and suspicious death in a mental institution at the age of 35.

Reggae Steady Ska: Don Drummond was not only the most influential person in the development of ska and reggae, he was one of the most significant musicians in the 20th century, period. But yours is the first biography.

Heather Augustyn: Certainly everyone is interested in Don Drummond, both for his music and for the intrigue of the story of his life, but it’s a difficult life to research, frankly. Part of the reason is that Don Drummond has no living relatives, so that creates a challenge since we only have friends and colleagues to go by, and as any of them will tell you, none of them knew Don well because he was unknowable, given his condition. As for the factual evidence, that was tough too. It took me two years of daily bombardment to finally obtain Don D’s birth certificate, and even longer to obtain his death certificate. The Jamaican system is not easy to navigate. I could bore you with the details but suffice to say, it’s archaic at best, even though the staff do try. Many records have been destroyed. Jamaica is frequently hit by storms and hurricanes and some have been so devastating that entire buildings of records are literally gone with the wind. Add that to the fact that there are those who wanted to bury this story, so some records may not be able to be obtained. I tried to go through every channel, even having the former Prime Minster P.J. Patterson assist in my pursuits. I honestly feel that if anyone can do a better job of navigating this system for records, I haven’t yet met them! It is tough. And I didn’t want the story to be all anecdotal. That wouldn’t do justice to Don D’s life, nor would it be fair to my readers. Every Don D. story up until now has been imagined, fictionalized, or rehashed from the few facts that existed. I refused to go that route. I’m a journalist. I wanted primary sources.

RSS: What was your process? How did you do the research, check your facts, put the story together?

Heather Augustyn: I talked to a lot of people. Dozens. These people knew him, played with him, rode bicycles home from the clubs at night with him, smoked with him in the hills, saw the body of his lover with the knife still stuck in her chest. I had the stories. But what I, as a journalist, did to add layers of meaning and fact to those stories was I took them and investigated everything they told me. If they mentioned Club Havana, I went through the Gleaner archives to see where it was, what it looked like, what entertainment appeared on the bill. I spent a lot of time in the Gleaner archives ferreting out every detail I was told. If they gave me an address I went there during my research trips to Kingston, to see what it looked like from all angles. I walked the grounds of Club Havana, stepped on the tile where Margarita danced. I walked around the house where she was murdered and they lived, looked at it from all angles to see how her screams could carry to the other rooms of the house. I went to the Rockfort Police Station so I could see how far he walked, pushed open the gate he walked through. I stood on the stage at the Ward Theater to look out at the audience to imagine how it looked when he blew his horn. All of that helped me to really put together the picture of what happened, where he lived and walked and played. Like I describe in my introduction, I tried to paint the spaces around the image to reveal the image.

RSS: How do you write a biography about a man who even his closest friends say they never really knew?

Heather Augustyn: I think it’s important to put together the context. Why didn’t his friends know him? It was the mental illness, the conditions that contributed to his illness, etc. So I tried to get in his head, so to speak. I tried to consider his frustration over his lot in life, his 15 years of performing week after week with little to show for it while others left for greener pastures, his poverty, the treatment at Bellevue, the treatment from his fellow Jamaicans who knew of his illness. I think by showing the events of his life the reader can gain compassion for him, and compassion is a deeper sense of understanding a person’s character.

RSS: One of the surprise stars of you book is Anita Mahfood, better known as Margarita, the exotic dancer that Drummond killed.

Heather Augustyn: Yes, I almost felt like the book was just as much about her, in many ways, as it is about him. No one ever talks about her except for her name, Margarita. Maybe they know the one song she sang—sort of miserably, actually—Woman A Come, also called Ungu Malungu Man . Or they talk about her as Don D’s victim. But she was so much more than that. Without her, I argue, there may have well been no reggae as we know it, no Bob Marley as we know him. She truly championed the music of Count Ossie and the Wareika Hills, bridged the gap between uptown and downtown as only she could since she was a bridge herself as a member of one class with a foot in another. Her exotic appeal, neither white nor black, allowed her to be a messenger in the clubs and she fought for the music! She is the true heroine here.
RSS: In his forward, Delfeayo Marsalis (of the famed Marsalis family of jazz musicians) implies that Drummond’s greatness was hindered by ska.

Heather Augustyn: I wouldn’t say it was hindered by ska, but I do see that point of view because for Don Drummond, music was his occupation. He played what he was told. In the clubs he played the jazz standards for the tourists. In the studio he played what would sell. When Coxsone [Clement Seymour “Sir Coxsone” Dodd, Jamaican record producer] said write a Trolley Song from Meet Me in St. Louis he did, Further East. That’s what hindered him, the business of ska, the business of jazz. Creatively he was limited by what would sell. I’m sure many musicians can identify with that. Had he not had to sing for his supper he could have branched out to do who knows what. And he could have ventured into other genres too, especially as they were coming along. Can you imagine what he would have had to say with his horn during the soul years, the funk years, and the avant garde jazz years?

RSS: What’s one thing you learned about Don Drummond that you think fans of ska and reggae need to know?

Heather Augustyn: First of all, I want to set the record straight on a couple of myths out there. I have comfortably found that Drummond was not murdered by Anita Mahfood’s father. Jad Eid Mahfood, her father, died the year after Anita so he was dead by the time Don died. Not possible. I also have found no evidence whatsoever that he was murdered by anyone in her family. There is, however, ample evidence that the medications he was on were the reason for his death. I feel I have exhausted this research and my conclusions are sound, not based on conjecture or lack of acceptance of his death. Second, I think there’s another myth out there, but this is a little one, that Don Drummond jumped on stage during Dave Brubeck’s performance in Kingston and tried to steal a little spotlight for himself. Not true at all. He was one of only two musicians invited by Brubeck, along with guitarist Janet Enright.

RSS: Biographies show all sides of the subject. What’s one thing about Don Drummond you were sad to learn?

Heather Augustyn: That despite his skill and hard work he was never able to overcome. We hear stories of triumph all of the time—Oprah is full of them, she herself is one of them, and Elvis and Johnny Cash and Loretta Lynn and the list goes on and on. I teach my own boys that if you work hard and never give up and you develop your skill and your passion, you can be a success or be fulfilled with your life. That’s what we all learn, right? But it kills me to know that is not true. Here is an example of someone who despite immense talent and drive and hard work was not able to overcome the challenges of poverty and mental illness and struggle. I had to put a chapter in at the end talking about his legacy because now I think the beauty and work of his life has been realized, but it’s sad to know it wasn’t realized while he was alive, before he turned to murder, before he destroyed so much.

RSS: Can’t let you go without asking this: Your Top 5 Don Drummond songs.