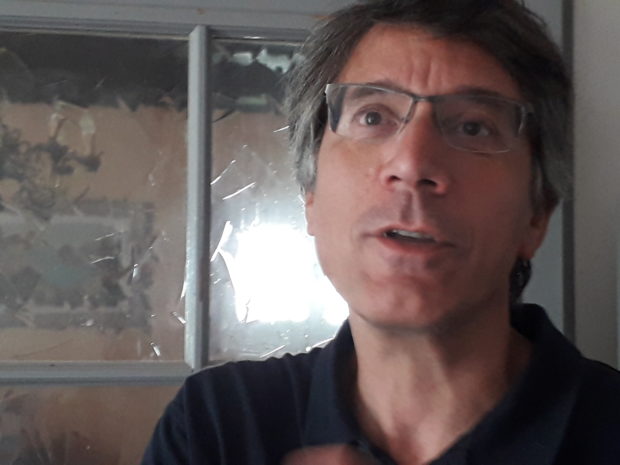 It’s back-to-school time here in New York so it’s a perfect time to crack open Jamaican Music in England: From the 1960s to the 1990s by poet, educator and prolific author Eric Doumerc. This slim historical guide—a breezy 120 pages—provides a well-researched overview that’s filled with dot-connecting details and enlightening tangents. The writing is clear, almost conversational, balancing depth and brevity, packing each page with interesting facts and insightful commentary. If you lived the era, it’ll be a pleasant stroll down memory lane. If you didn’t grow up in England—or if you were born after the fact—Jamaican Music in England provides a solid base understanding and will fill in a lot of the blanks you’ve been guessing at.

Eric (actually, Dr. Eric Doumerc) teaches English at the University of Toulouse-Jean Jaurès, southwestern France. His research interests include Caribbean poetry, music, and the Caribbean oral tradition. He’s written, edited or co-edited a slew of books including anthologies of poems by black poets from the West Midlands, a history of the English-speaking Caribbean since independence, an introduction to poetry, loads of articles and this cool piece on the movie The Harder They Come.

RSS: You state in your introduction that Jamaican Music In England takes a cultural studies approach to the topic. Tell us about this approach and your research process.

Eric: The Cultural Studies approach means that you do not simply consider things from a purely factual, historical point of view, but that you may use elements from sociology as well. It is based on the work done by Stuart Hall, Dick Hebdige, and Paul Gilroy in Britain. My research was done both in England, and in France and did involve a certain amount of library research! I used the music press quite a lot too: papers like the New Musical Express, and Echoes. I also used interviews I did with people like the dub poet Moqapi Selasssie, and various people working in the music business (like the deejay Macka B).

The immigrant experience is both universal and unique to each group of immigrants. What unique challenges did the first wave of Jamaican immigrants experience?

The first Jamaican immigrants, the Windrush generation, experienced serious challenges, coming to a country in which black people were at the time not very numerous, and having to get used to the English climate. Many Caribbean people had never seen snow before, or seen white people work. In the Caribbean, the only white people they had seen were in positions of authority and did not really “work” in the conventional sense of the term. There was also a good deal of discrimination in the fields of housing and at work. Signs like “No Irish, no dogs, no Blacks” were common then.

In your book you point out how the Notting Hill Carnival played a key role in fostering the development and acceptance of reggae in England,

One of the stars of the book is the poet Linton Kwesi Johnson.

Linton Kwesi Johnson played a very important role in the popularisation of reggae in England in the 1970s. His albums, mixing reggae with poetry, made many people aware of the genre known as dub poetry. He also worked with the BBC in the 1980s on a documentary about the history of Jamaican music and this was aired on the radio. He also became involved in different projects and brought the Jamaican dub poet Mikey Smith to England for a tour. He later started his own label, LKJ Records, and released work by the female dub poet Jean Binta Breeze, the great guitarist John Kpiaye, and the talented saxophonist Steve Gregory. He also released a little-known album by the Vincentian poet/musician Shake Keane.

How would you characterize the Two Tone movement and the music it sparked?

The Two Tone movement fused the raw energy of punk music with ska and reggae rhythms and in that sense it was a very British phenomenon. Two Tone songs were sung with a nasal English accent and made Jamaican music very popular at the time. Bands like The Specials, The Beat and The Selector toured relentlessly between 1979 and 1981, and there was even a film about the movement (Dance Craze). But by 1982, it had become a circus: too many bands jumped on the bandwagon …

Your book highlights the contributions of lesser-known artists, poets, DJs and producers. One that jumped out for me was Ranking Ann.

Ranking Ann was one of the first female deejays at the time, a bit like Sister Nancy in Jamaica. Other important contributors were the producer Dennis Bovell, the singer Errol Dunkley, and the deejay Macka B.

The book brings us up to the 1990s and the influence of hip-hop, electronica and other fusions on reggae–will there be a volume two that takes us up to today?

Yes, I ‘d like to do a follow-up to the book, taking us up to today, but I need to do a lot of research first !

Eric’s book “Jamaican Music in England: From the 1960s to the 1990s” is available at Amazon (affiliate link).