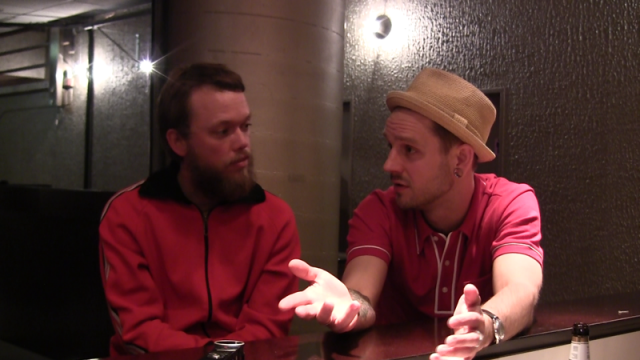 RSS: The story you just told (in part 1 of the interview) is from Daniel’s youth in Sweden. So, when did you come to Denmark? Was it before or after you started making music? Or is the whole band from Sweden?

Mikkel: The whole band is from Denmark, except Daniel. And when we started playing the bassplayer was also from Sweden.

Daniel: I came there (to Denmark) to play music. I started playing in Sweden, but then I met some people who told me: „You know, you can study music there. You can get student funds and make music.” One thing led to another, and then I started studying music in Copenhagen ten years ago.

RSS: And there you met the rest of Babylove & The Van Dangos?

Mikkel: We started to play in another band called Furillo. A punk band …

Daniel: … the trombone player is also from Furillo.

RSS: Wasn’t the band Yardshaker connected to them, too?

Daniel: The bassplayer from Yardshaker was our bassplayer for one day. (laughing) But it’s a funny story, because this guy is a really good bass player, steady, grounded. But something always happens when he is in a band. And we were like: „But you know how it is with Nicolas, when he joins the band then something happens.“ We still went for it and the next day he called us and he had a new job and said: “I’m sorry guys, I can’t make it.“ So we had to find another one.

RSS: Daniel, who and what inspired you when you began to write songs?

Daniel: I started late writing songs, because I started as a drummer. And it’s still hidden somewhere deep in here (points to his chest). But a pretty lousy drummer. I started writing when I was 15. And I was very inspired by Jimi Hendrix. I was a 15-year-old kid who never did any drugs but tried to write psychedelic songs, and it turned out shit. But I always had the need to tell people about me and how I feel. And it comes out in everyday life as well that you just talk a lot and maybe tell people too intimate things sometimes.

RSS: Somehow you came to write music in a Ska/Rocksteady mode. Or do you think that your songs are not Ska songs, but just songs, who happen to be played with a Ska beat?

Daniel: … I was really late into Ska. Let’s say I came from a HipHop background. That was the first music I actually wrote. So, I lied before, because I wrote before, but that was Rap. And then I did everything, also play in Rock bands. But when I found Ska, It had the beat that I always wanted. You could just ignore the lyrics and dance to it if you wanted, or you could dive deeper into it. It’s like Blues music. If you listen to it, it’s very simple. And a lot of people think that Blues is something that a couple of 40 year-old fat guys are playing in a hobby band in a basement. …

RSS: So what inspires you today?

Daniel: It can be anything. There is different kinds of songwriters. I always liked someone like Phil Lynott. His rhymes were clicheed. He rhymed „fight“ with „night“, „fire“ with „desire“. It was almost a heavy metal way of writing and rhyming. But he still gets his point across. And he can make people understand the emotions. And the really mundane lyrics. And on the either side I like the more abstract Dylan, Tom Waits. They never say it straight out. They always use a lot of symbolism. So, it has changed. I’m trying to be more abstract now. I used to want to say it straight out and now I like to write around it. And give hints so that you got these pieces of a puzzle and you can put them together yourself, if you want to do it. 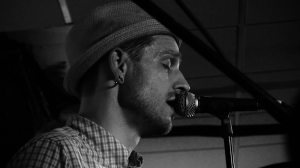 RSS: When I listened to your songs I thought they were quite straight forward, but not with many clichees.

Daniel: With the lyrics it’s also so that it’s good to have your own interpretation of the song. Some songs mean one thing to a person, and a totally different thing to the next. That can be a beautiful thing.

Or hiding really good lyrics in a bad song. Like the Gloria Gaynor hit „I Will Survive“. When you listen to it you hear a straight up disco song, but if you read the lyrics, they are really good. And they are powerful and talk about a moment in someone’s life when everything got turned upside down. And the singer’s reaction to the the situation is: „Fuck it, I’m gonna make it anyway.“ And I like that. I am happy if I find good lyrics in popular music where you normally don’t listen to the lyrics and wouldn’t expect them to be good.”

In part 3 Mikkel and Daniel talk about their first three albums, under which circumstances they were produced. And what they DO and what they DON’T like about them.

You can pre-order it now at The OfficialReggae, Steady, Ska Shop. (Affiliate Link)