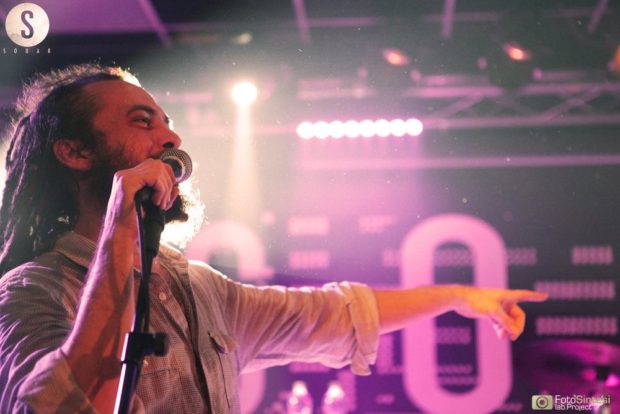 My favorite Skatalites show? Every one I’ve ever seen. And that’s true for the recent show at The Haunt in Ithaca, a college town in upstate New York. Lester Sterling no longer tours with the band, but founding member Doreen Shaffer was there, as well as longtime members Val Douglas (bass), Trevor “Sparrow” Thomas (drums), Ken Stewart (keys and amazingly flexible dancing at 1:20), Azemobo “Zem” Audu (tenor sax), recent additions James Smith (trumpet), Buford O’Sullivan (trombone) and nine-year veteran Natty Frenchy (guitar.) A fun, lively show and a grand time for all. Afterward, I sat down with Natty to discuss many things, starting with how to pronounce his real name.

Aurelien: Yeah, Aurélien Metsch. Not in France, but in America they have hard time with Aurélien. So I go with Natty.

We’ll go with that, too. Where are you from in France?

I was born in Bordeaux in southwest France by the ocean but I grew up in Africa, Ivory Coast (Cote d Ivoire). I moved back to Paris when I was a teenager, then New York.

I was talking to Eugene Gray recently and he was telling me how he got started. He fell in love with other instruments first. He came to the guitar, I think it was his third or fourth instrument. What was your route?

Today I was listening to Eugene Gray! It’s funny, I was wondering who played the saxophone on one tune. I looked for the credit, and I could not find who was the sax player. A lot of instruments were played by Eugene Gray, and now you tell me that he plays saxophone! A little bit of piano and percussions when I was a kid, then with the guitar when I was a teenager, listening to all kind of music. Rock, jazz, reggae, salsa African music … Eric Clapton and Jimi Hendrix … Joe Pass and Wes Montgomery, Bob Marley and the guitars of Junior Marvin and Al Anderson … Skatalites … Ernest Ranglin

Tell me about your first guitar.

A friend said “Try that.” putting a guitar in my hands I even don’t remember the brand. It was like a Jaguar Fender. With a lot of buttons on it. He let me use it for a while and I got myself an acoustic one …

What do you play now?

I have a couple guitars. Tonight, I used the Telecaster JV, Japanese made in the early 80s in Japan in a factory called Fujigen, and they are really well made. Just got that recently, and I like it for the ska. I like the brightness of it. I also have an Ibanez am 50 semi-hallow body and a Fender Strat, both from the same Fugijen factory. I used to tour a lot with the Ibanez for the Skatalites.

You’re about to go off to Europe. You’re going to Chile in a couple of days. How many guitars will you bring with you?

I’ll only bring one.

What other gear do you bring to a show?

Well, it depends on which music I play. If I play with a reggae band, I will carry more equipment, like effects pedals whawha , phaser etc … But for the ska, I keep it pretty simple. I have an overdrive and a delay for some of the leads

When you listen to guys like Ernest Ranglin, Eugene Gray, what are you hearing? What do you listen for?

Celestial?! Melodies! Yes … Ernest is the master! Versatile melodic chords feel everything! Eugene is also a master. I love his sound and his playing—they both sound different and are my mentors!

Felicia Grey, Eugene’s wife, told me that many times she’s rolled over in bed and bumped into the neck of his guitar because he’s fallen asleep in bed playing the guitar.

Haha it also happens … you got to practice and live with the instrument!

You’ve got to be playing all the time.

Well we’re on the road like 7 months of the year. A lot of shows, yes, and we love it! Music is our occupation. Show, practice, studio!

You’ve been with the Skatalites for nine years now. How do you help keep the band an active, live band and not just a tribute band?

Well it’s just a continuity. When I joined the Skatalites, Lloyd Knibb was there Lester Sterling, Cedric Brooks was playing tenor … so that wasn’t the original line up but who was still around was in the band. Now today it’s a little bit different. We’re not the originals, but we’re part of the band. Lester always said keep on doing it!

The continuity is really important. It’s a band that just continues to go.

It’s like the Count Basie Orchestra. Still going on. And then Skatalites is a name. It’s an orchestra, and this is what it is for now. It’s a honor to be part of this.

Fans know that the originators are not with the band anymore, and that you play a part in keeping the band going—

We’re all playing a part. All of us. We’re here to represent, you know what I mean? We all bring idea to the table and try to do the best of our ability.

I was really hoping you would play your song Lalibela tonight.

You know they took that song for a movie but I don’t remember the name. Yes well we played it couple times, but not enough! Last summer a band was opening for us and they played it! That was a good feeling.

I appreciate that. Thank you. It means a lot. It was a great experience to record with the Skatalites, with Lloyd Knibb. You know, Lloyd Knibb was always ready to go studio. When we did “Walk with Me” Lloyd Knibb was like around 78 years old. That was his last session.

When’s the next time you’re going in the studio?

Well, we went a couple weeks ago. We have two singles in the mix We’ll see. And then we had the album, the last album, Platinum Ska. And Hopefully we go back soon. To me, there’s nothing better than production. [Natty’s also the founder of Wadada Music].

The Skatalites’ most recent album:

Listen to “Platinum Ska” by The Skatalites on amazon. (affiliate link)