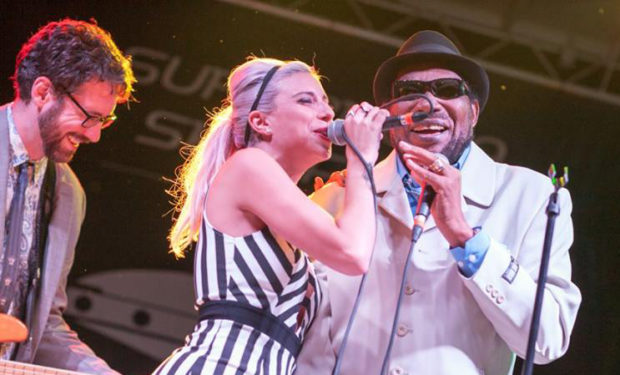 Back-to-school sale ads have taken over the airwaves so I suppose that the summer of 2017 is winding down to a close. My summer started off with a bang at SuperNova Ska Fest, May 27-28 in Fredericksburg, Virginia, where more than 30 bands kept the ska-mad crowd dancing till the wee hours. If I were a better journalist, I would have posted all the interviews I did over that weekend by now. But life sort of got in the way, and here we are, staring October in the face, and I still have a dozen interviews to get to. So I’ll take a mix-tape approach, putting together a side of interviews with four of the bands (Party Like It’s …, The Upstarters, The Fuss and The Toasters) that played the biggest ska fest in North America. Sure, it’s the lazy way out, but it’s summer and it’s hot and there’s a cold beer calling my name. You’d do the same.

That’s the name of the band and that’s exactly what they do. The band was picked to open SuperNova. A wise decision. With Cathy DiToro on lead vocals, Eric Taft on guitar, Taylor Morden on trumpet, Morgan Russell (also of Eastern Standard Time) on sax and Lee Hallett on drums, Party Like It’s … set the high energy, live-it-up tone that lasted the whole weekend.

RSS: You opened up Supernova Ska Fest in a very infectious, wild-party style.

Cathy: We just have a lot of fun when we play music together and we want other people to feel that energy from us. And we just like to perform, so if people are down and into it, it’s great. They don’t know what to expect sometimes, so we always get free positive feedback that they just felt like they had a blast and were able to just feel the energy and get excited. So kicking off SuperNova was perfect for us!

And you have an album in the works.

Eric: We’ve got a couple tunes recorded. We have a single out now called Clockwork Lover with a music video, but we’re hitting the studio later this month. Yeah, we’re hitting the studio later this month to record two more. Hopefully we’ll be writing a lot more, but in the meantime, there’ll definitely be an EP out to hold people over. And we’ll be putting out a record, hopefully, sometime very soon.

Cathy, at the end of the first night, you sang a few songs with Derrick Morgan. What was that like?

Cathy: Surreal! It was everything I could have hoped for and more. I was so incredibly honored.

Note: There was more to the Party Like It’s … interview, but I’m sworn to secrecy. Once the news breaks, they’ve promised RSS and exclusive interview. Right, Cathy?

Hailing from charming Baltimore, Maryland, The Upstarters (Kanika on vocals, Ryan on guitar, Niko on wind and brass, Emerson on the tenor sax, Kendra singing harmony, Emily on the t-bone and Griff on drums) start with a lot of ska, then blend in reggae, rock-core, punk, hip-hop, metal, funk and R&B to make a power-packed and very satisfying musical cocktail.

You’ve got a unique sound. Who writes the songs?

Ryan: I do 90 percent of the music, like the core of it, and then I have the other members sort of filter it through their opinions. We kinda chisel it back. Kanika does everything vocal. I don’t do anything with the lyrics or any of that. That’s all her.

Kanika: I have a songwriting partner, John Gordon, who helps me out as well. He played the bass today, he’s my partner. We’ve been writing music together for a while.

With so many influences, your band could have gone in any direction. Why center on ska?

Kanika: I think it’s the whole soul of it. It’s the whole happiness in it. I can’t explain it. But, it’s the way that that guitar and the drum hits. It’s a certain feel that it’s not like you can’t stand still. You have to kinda move and get excited. So that is what it is for me, it’s why I go crazy when we’re performing, because I get so excited. And I think that we do a great job at genre-blending. Whether you’re in love with pop or rock or ska or …

There was a ska-ed up Led Zeppelin cover in your set.

Kanika: Yes, we did Led Zeppelin, I mean, go figure, right? I think, our band so unique in that we can blend into any type of musical face. We bring our own identity and our own sound to all of these different styles, and somehow, we blend them and they work. More importantly, people have fun when they see us perform. People dance, they cheer, and we have as much fun with them. It’s a wonderful experience that people love you as an independent artist, who don’t really know your words or your music, but they still love what we’re giving on the stage.

What’s next for the band?

Kanika: We have a new single called Cryptic and we just got finished shooting the music video to that song a couple weeks ago. So, we’re looking forward to  releasing the video and the single in the next couple of weeks, and a new album that’s gonna be coming up, as well as all of our new sounds. We’re loving the idea of touring, so, anybody who wants to book us for any part of the tour.

With an authentic, old-school ska/rocksteady sound, sweet harmonies and a stage full of outstanding musicians, The Fuss won a dance floor of new fans at SuperNova and proved that, despite everything, there’s great things coming out of Washington, D.C. The Fuss is a big, tight and talented nine-piece band, with Andi Leo on lead and Julia Robey Christian on backup vocals, Michael Cuesta on guitar, Adam Grise on the trumpet, Megan Nortrup on sax, Keith Duncan on the t-bone, Mike Corvasce playing keys, John Buck on bass and Jeremy Caesar driving the drums. And now they’re In Trouble.

Andie: Our EP came out about a year ago. It’s called In Trouble and it’s a six-song EP. That was our first studio recording. We’re just about to release a second studio recording, which is a seven-inch record with an A side and a B side, both need songs that weren’t on the EP. Hopefully, toward the end of this year we will start looking at recording a full length.

There’s always been a lot of great ska and reggae bands in DC and Baltimore and that whole area. Is it something in the water?

Andie: You know, it’s really interesting. I think there ended up a lot of kids like us in DC, people who were kids in the 90s, who really got into that whole music, scooter, mod kid culture, whatever, who really, really grew to love it. And we’re still there. There’s a lot of people who aren’t still there, so it used to be much, much bigger. So judging from that, it’s definitely gone down a little bit. But on the other hand, you’ve got devoted people there who still really care about it and want to keep it going. And I think that’s kinda where we fall.

John Buck: When I moved to Baltimore about 14 years ago, the whole dcska.com scene was still pretty big, but that was a lot more third way, more ska-punk. But there was a whole circle of us, like Pablo Fiasco, my friend Ryan and Bobby Bobson, he was with the Ratchet Boys and The Ready Steady Go!, and we all became good friends and we were all listening to a lot of good music. And have these jam sessions. A lot of musicians would start pulling in. We’d have dance parties and people would come out and listen. We’d play old records and dance to it. It was the kind of thing where we were thinking like, oh man, maybe old is good again. I think it’s more prevalent in D.C. and Baltimore as a result of some of these DJ nights where musicians were hearing this stuff all the time and wanting to play it.

Andie: If you love old style rock reggae, check us out and look for new recordings from us, follow us everywhere on social media. We’d love to actually do some tours one day, more outside of our area, so if you’re interested, let us know!

If there was a Mt. Rushmore of American ska, The Toaster’s Robert “Bucket” Hingley  could pick his spot. There were dark days where it seemed he single handedly kept the ska fires burning over here, and given how the music industry treated his efforts, he has every right to be a call it quits. But leaders lead, and there he is, chatting with fans, cheering on other ska bands and delivering a blistering set of tasty Toasters classics. They played 227 shows in 2016 and are on pace to play slightly more than that in 2017. I found him at the band’s merch table less than 24 hours after the band returned from a quick European tour. You don’t really interview Bucket, you just hit record and hope you don’t miss anything.

Bucket: The music business is in a really strange place right now. There’s no money in it, and bands can’t make any money off of recorded music anymore. At least in the distribution field. It’s all about live shows, so you have to play live to earn a living. And if you’re not ready to do that you’re in trouble in the music business. Fortunately, that’s what the Toasters do. And I’ll be doing a lot more of that for the foreseeable future.

We’re not in a rush to make a new record because the industry doesn’t support us [bands] at the moment. I don’t want to spend all the money making a new album so Spotify, Google and YouTube can benefit. I’m not into that. I’d rather spend the money on tour support and get out and play in obscure areas to give fans a chance to see us. We are putting out a series of 45 singles here and there—the last one was House of Soul—with another one slated for later in the year.

Ska music isn’t exactly in the spotlight at the moment, but that’s what it does every now and again. It’s a cyclical thing, and sooner or later it’ll pop back up. The thing we do need is for the music business to stop paying attention, then we’ll have a chance to grow the bands at their own organic pace. We’ll come back when we’re ready.

Note: Special thanks to Toasters super-fan Karen C. who threatened bodily harm if I didn’t “get that Bucket interview posted already.”

Photo: The Fuss – by Charles Benoit