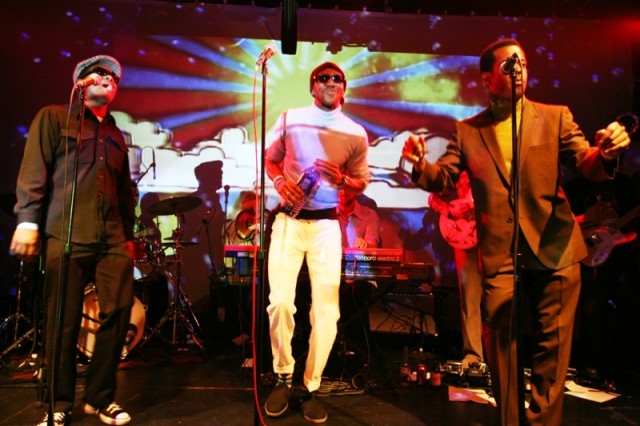 [dropcap]I[/dropcap]f there is one post 2-Tone band every serious Ska fan truly adores it must surely be Hepcat. Two years ago, (nearly) out of nowhere, they returned to play a string of dates in Europe. The shows were among the best we have ever seen by any act on a stage, Ska or not. True love was floating from and onto the stage from the first note played. As the band even included three or four new songs in their set, fans have been eagerly waiting for a new album and further activity. We could not stand it anymore and got in touch with lead singer Alex Désert and Deston Berry, who plays keyboards, provides harmony vocals and founded Hepcat more than 20 years ago, to find out what’s going on.

RSS: Two years ago you played a string of fantastic dates in Europe and included a few new songs in your set. Will there be a new Hepcat album anytime soon? Will we get a chance of seeing you tour over here again?

Deston Berry: As of right now, there aren’t any planned overseas tours involving Hepcat or any new recordings… but if this changes, the fans will know ahead of time.

RSS: Over the years, you have recorded and played some excellent covers of vintage Jamaican songs like “Monkey Ska” or “Hooligans”. Which other songs would you like Hepcat to cover?

Deston: As far as playing Jamaican covers, we all have a great time picking old songs that we can play. If Hepcat plays another show again, we will most likely revisit playing more covers, hopefully new ones…but as of right now I don’t know what they will be as everyone’s taste can be very different when it comes to picking covers. One cover that I personally would like to see us play would be the old ska song, “Lonesome Track” by The Wailers. As far as American singers go, Curtis Mayfield is a big inspiration for me, and I know Alex and Greg have different heroes as well.

Alex Désert: I personally have always wanted to cover some Paragons songs – especially “Sparkle Of My Eye” and “Only A Smile”. The denseness of their harmonies and smoothness of their sound has always been an inspiration to me.

RSS: Which singers are your greatest musical heroes? If you got the chance, who would you like to share the stage with?

Alex: Oh boy…that’s a tough one. We’ve been fortunate enough to have shared the stage with some of our (my) heroes – Toots Hibbert, Alton Ellis and The Heptones to name a few. Each instance was a lesson in professionalism and showmanship. I still can’t believe it at times!

RSS: If you had to deejay at a soul allniter, which records would be on top of your pile for your DJ box?

Deston: If I had a chance to DJ a soul allniter? I would probably hire someone else as my personal soul collection isn’t very impressive! But definitely James Brown and possibly various Stax recording artist would be played.

Alex: I’m with Deston on this one…hmmm…definitely some Stax – “Be My Lady” by Booker T is one of my favorites. “Hip Drop” by The Explosions. DEFINITELY! Love dat! “The Street Beater” by Quincy.

RSS: What music have you bought recently?

Deston: Sadly I haven’t bought any new music in a while and I’m looking to go back to Amoeba in Hollywood real soon. I think Soul Jazz’s “Bossa Nova and the Rise of Brazillian Music in the 1960’s” was the last thing I bought there… which is a great CD.

Alex: My good friend Deston here just hipped me to Nicola Conte’s “Jet Sounds”. Yeah, I’m a little late to the game – but I’m IN the game! Sweet bossa nova and samba delights.

Alex: Funny you should ask…I’ve just returned from selling off a bunch of old CDs. I like the convenience of mp3’s, but will forever love the ritual of putting the disc on the turntable and laying down on my floor as the tunes wash over me. You just can’t beat that feeling.

RSS: Alex, how important is your acting (and voicing) career for you nowadays? Is that the reason for the long spells of silence for Hepcat?

Alex: My acting career has always come first in my mind, but as the universe has planned it, I tend to do what is in front of me at the moment. Yes, this is the reason behind some of my absences from Hepcat. Fortunately, the brothers have always had me back and have understood even though it has made for scheduling conflicts in the past. I’ve been blessed to have two cool (sometimes frustrating) careers that I love.

RSS: If you could pick somebody, which musician would you like to play in a movie?

RSS: Listening to younger Ska bands, can you hear your influence on some of them? Are there any bands out there you like?

Deston: There are a lot of musicians in Los Angeles that I personally like…The Aggrolites, The Expanders, and The Lions to name a few! The great thing is that I don’t hear any Hepcat influence on the newer acts…that is a good thing truthfully. The bands that I like in LA are more reggae based. And I think it’s a good thing that each band coming up, whether it be Reggae, Ska, Soul or whatever… each one has their own individual unique sound that helps diversify the music a bit…

[alert type=”blue”]Alex and Deston are both part of The Lions, who are about to release their new album This Generation in early 2013. See the interview with producer and guitarist  Dan Ubick for more information on this amazing project. A German version of this interview can be found in the current issue of Rocking Steady magazine.
[/alert]

Hepcat have just announced a new show at LA’s House of Blues for 16th February 2013.