“The only goal we ever have is to crack each other up.”

An interview with FIVE HEAD

Any city worth living in has a ska band. The more ska bands you have, the better the city. That’s a fact. Hugging the shores of Lake Ontario, a five-hour drive from NYC, humble little Rochester, NY, has four: red-hot up-and-comers Turkey Blaster Omega, reggae masters Personal Blend, my own Some Ska Band and the granddaddy of them all, local legends and crowd favorites FIVE HEAD. Normally I’m not a big hometown booster boy, but when it comes to FIVE HEAD I’m making an exception. Guitarist/singer Rob Reed, bassist Steve Pizzuto and drummer Dan Snyder formed the band back in the late ‘90s, augmenting their trio with a succession of Eastman School of Music horn players, the type of serious jazz-heads more up on Coltrane than Cole. The result has been hundreds of dancefloor-packing shows and four outstanding CDs, including their latest, Superette, their best yet.

Practicing good quarantine protocols, we met up on a conference call to chat.

RSS: Take us back to when the three of you started the band.

Rob Reed: It was 1996. I broke my leg and was sitting around trying to get better at singing and playing guitar and enjoying myself while I was convalescing. Steve had picked up a bass and we decided to get together and check out what it would sound like if you put the bass parts to what I was working on. We wrote a handful of songs, and then we roped Dan in to help us record them. Went out and gathered up some horn players from bands around town. We kind of thought it was just going to be something we would just goof around with for a little bit. And then we all heard the recording we made and said, “Gosh, we got to keep doing this.”

Steve Pizzuto: The very first show we played was opening for Bim Skala Bim at Water Street. Which was like a total trip. We went from playing in Rob’s basement to playing on stage at Water Street for a pretty big crowd. We’ve played with the Pietasters, Bim Skala Bim, the Toasters, Mephiskapheles … we opened up for other non-Ska acts like 10,000 Maniacs, and I know we opened up for Guster at one point. And didn’t we open up for Crash Test Dummies one time?

You never toured, even regionally, did you?

Steve Pizzuto: Not really. I think the closest it ever came was Empire Brewing [gone but not forgotten—CB] had us do this routine where we would play Buffalo on a Thursday, Rochester on a Friday, and Syracuse on a Saturday. That was about it.

You took some time off, then came back with a legendary reunion show. How’d that happen?

Dan Snyder: Somebody said, “I dare you guys get together and play a reunion show.” And I said, “You know better than to dare me.”

Steve Pizzuto: We just called the old horn players. And they said, “Yeah, they’d love to do it.” So we threw the whole thing together and like 400 people showed up, which is totally bizarre.

Rob Reed: After nine years, you’d think nobody would even remember you, but 400 people came. So it was good. It was a good sign. And Steve kind of anticipated that’s the way it was going to go so he arranged for the film crew to be there and shoot it. And thank God he did, because it turned out so great. 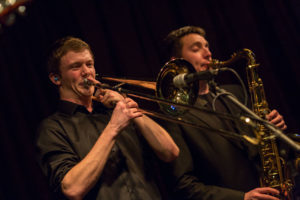 Steve Pizzuto: We’ve always had Eastman kids in the band. I think we’ve had probably 25 Eastman kids through the band at various times.

Rob Reed: It’s kind of funny the role that we’ve ended up playing for that music school. It’s kind of exciting and interesting because the first players were fairly somewhat close to our age. They came in as these highly trained musicians and we had to teach them how to unlearn all the beautiful, eloquent things that they learned at the music school and learn how to just get out there and rip. Eventually they realized that it’s a workout and it really is a formative experience for them to get into a band where you’re expected to play two or three hours and be on fire every solo, every song. And they don’t get that experience in any of the ensembles that they play with at the school. They end up ultimately looking back and saying, “Boy that was a great experience. That really made me a stronger player.” Often we’ll see a group of the friends of the Eastman kids that are playing in the band, and they’re watching wondering if they would be able to hold up to that firestorm. When the time comes when they’re leaving the band, there’s sort of a tradition of handing us off to someone who is already aware of the band and is interested in playing. It’s not always that way, but it often works out that way.

Steve Pizzuto: Yeah. Like they’ll know who the next guy in line is that can fill the shoes of the guy that’s leaving. 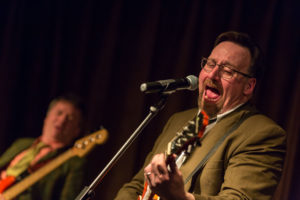 How do you describe your sound?

Dan Snyder: I don’t think we tried to, I think this newest record, Superette, has a lot of just straight up soul music influence and, at times we’re like, “Okay, well, how can we make that sort of still moving?” So I don’t think we actually sit down and think about it, we start messing around with something and it just pops out FIVE HEAD. So even the things that don’t seem like that’s a straight up ska song, still sound like us, somehow.

Steve Pizzuto: I would say we probably don’t talk in terms of first wave, second wave, third wave, too much, or even rocksteady or anything like that. We will sometimes use that language if we’re trying to get someone quickly on the same page of a starting point.

Rob Reed: Sometimes a member will come in with a song and be like, “This is complete.” And then other times it just starts with like a spark. Something that just happens at rehearsal, organically. And usually even the individual songs go through, the FIVE HEAD blender where somebody says, “This needs to go over there. Can we do that? Let’s change the feel.” And so, you know, almost everybody has a hand in it. But the end result is always something that we’ve hammered out together.

And the guy who plays keys on a lot of these songs, if not all of them, Andrew Links, he threw out a few ideas as well for chord changes or arrangements or rhythms. And, again, we’re always open to that.

Your lyrics are always fun and it’s safe to say they all have a slightly smart-ass attitude. I can’t think of a truly sentimental FIVE HEAD song. I was listening to “Cry Baby” off the new album and just when I thought that maybe I’d get a song that pulled at the heartstrings you took a wild turn.

Dan Snyder: That’s funny because I told Steve about a month ago that I wrote that song for my wife and he was like, “What? Wait, I’m going to have to go back and give that another listen.” And I think it’s because I’m a consonant smart ass. Even the sentimental songs don’t sound sentimental. I can’t help it.

You took a not-quite-traditional approach to this recording as well.

Steve Pizzuto: We decided to go with a hybrid recording, mostly live to get the energy of the band across that can be lost with a layered studio recording, but be able to do multiple takes. Our engineer Calvin May set up a bunch of mics at my house and we ran four or five takes of each song and picked the ones with the most punch.

Your shows also feature a lot of Mutt-n-Jeff comedic cross-talk and asides, a format that’s always seems to have been a hallmark of the band.

Dan Snyder: The three of us grew up together. So there’s a tremendous amount of inside jokes between us, but I think as soon as we hit the stage, the audience is as much a part of the show as the band. We want everybody to feel like this is a party for you.

Rob Reed: And we want to let you in on the joke. And, what’s interesting, too, speaking just for myself, I am not a strong improvisational musician. I learn my part and I stick to my part and I try to execute it faithfully. And if I’m able to do that, I’m really happy, if I’m able to actually get up there and stick the landing and play the part and sing the part. But when it comes to the time in between songs that’s where I, generally speaking, don’t put any thought into it. I just show up and improvise and see what happens. And then I try to keep up with what’s coming out of Dan’s mouth or Steve’s mouth. Like Dan said, we’re all just wise guys trying to crack each other up, and I find that part of the live performance to be the part that I worry about the least, and enjoy thoroughly, is just being able to crack laughs with these guys on stage.

Also read this review of “Superette!”