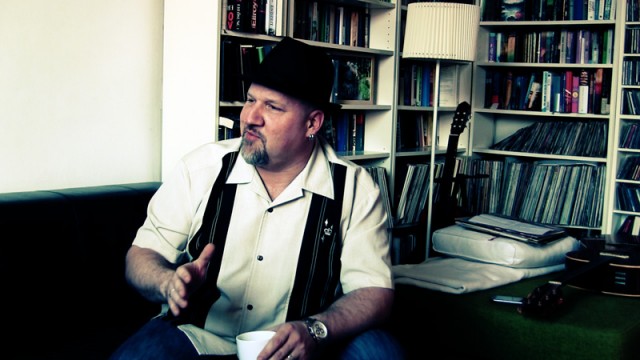 [dropcap]I[/dropcap]n the week leading up to the release of Dr. Ring Ding’s new album, we were lucky to catch the man for an interview. Thanks go out to The Skatalites for making it possible. Because when they played in Cologne, Dr. Ring Ding simply had to make a stop on his frequent travels through the Ska Universe to see the show. The interview we did actually comprised more topics, some history past and future. Other parts will be published soon. And there will be a video report, too. But for now we focus on Dr. Ring Ding Ska-Vaganza and their new offering. Don’t expect an approach with journalistic distance, I’m a fan.

Dr. RING DING: And it is piping hot. It is really hot.

Dr. RING DING:  Listen to this man! He’s an expert. He is a musicologist. He says the album’s great. Who am I to judge!

RSS: And I am very happy that you are here to talk with me about it. I heard you got the idea to record this album early this year.

DR. RING DING: It was about a year ago. I was on tour in Italy and in Poland. I played some of my old Ska material with that band from Warsaw in Poland, The Bartenders.  Then I went on to Rome and had three shows with a band from Rome called Shots In The Dark. A great band, they play traditional style. I did my traditional old Ska tunes with them. They were also backing Roy Ellis, Mr Symarip. And Natty Bo from London was there spinning records. I got so excited. I said to myself: “Man, I have to record some Ska tunes again.” And Tony from Liquidator Records from Madrid was there, too. I asked him: “Look, if I recorded a couple of tunes, would you put them out as a single?” And he said: “Yes.” I got all this inspiration. I wrote down all these ideas I had and then I had an album’s worth of material already. Ideas. Then I worked them out and asked my very faithful band The Freedom Street Band from Barcelona. I usually do Reggae/Dancehall shows with them. But they can also play Ska. They have also been backing Alton Ellis, Derrick Morgan, Ken Boothe and others.

So, I asked them, if they would like to record with me. They are really good. We did some demos, rehearsed them together. There are some great horn players from there, too. And we added some horn players from Germany: Mathias from The Busters is playing a multitude of instruments on the record. And Markus from the Senior Allstars is playing guitar and organ. Plus some percussion people from here. [You find all the details plus some nice photos from my archives in the booklet to “Piping Hot”.] And Doreen Shaffer is singing a duet with me. We started recording the basic tracks in May 2012.

RSS: Since the musicians live in different countries, did they actually meet? Or how did you arrange the recording sessions?

DR. RINGDING: Some of them haven’t met, I was driving back and forth to Torelló, which is a city close to Barcelona, where we did the basic track recordings. For some of the horns I went to Mainz in Germany where the saxophone player Mathias lives. In Muenster we did some recordings, which is  where I live. So I always had my hard drive with me and recording everybody, getting everything together. Then I sent the hard drive to the island of Macao, Hong Kong.

This is where the sound engineer who did the recordings of the basic tracks had a job for three months.  I wanted him to mix the album. We sent mp3s back and forth. He asked: “How do you like this mix? And I answered: “I love it” or “Can you bring up the horns?” Or: “Can you bring down the drums a bit?” “I love the effect on this one.” “I don’t love this effect here.” He did all the work in Macao. Doc‘N’Ric, he’s another Catalan musician and sound engineer, and did a fantastic job. 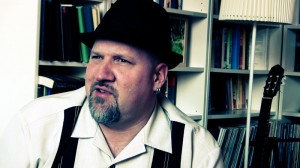 RSS:  Which labels did you contact? And was it clear from the beginning that you were going with Pork Pie?

DR. RING DING: It was pretty clear, because about a year ago Pork Pie Records put out the El Bosso & Die Ping Pongs album. And I was very happy with their work. How they do promotion, how they handle everything. And somehow it was clear that we should do a vinyl version, too, because Traditional Ska goes on vinyl. There has to be an LP. My agency in Barcelona, Buenritmo, are also a small record label. They offered to put out the vinyl version. Or I offered them to put it out. It depends which way you look at it. Pork Pie and Buenritmo are co-operating for the release of “Piping Hot”.

RSS: Let’s talk about some of the songs on the record. One is quite outstanding for us as Germans. It’s the instrumental called “Freedom Of Thought”. The melody is taken from the German Volkslied “Die Gedanken sind frei.”

DR. RING DING: Actually there are two folk songs on the album. One is “Freedom Of Thought”, and there is a Catalan folk song “El Cant Dels Ocells.” This is showing respect to the Catalan musicians that are on the album, and to my big fan base in Catalonia. They are one of the most lively and vivid Ska scenes in the world. I listen to a lot of Ska music from around the world. And I would say that the Catalan scene is one of the strongest in the world. And I love the song. Again it was the sound engineer Doc‘N’Ric who gave me the idea.  He asked:  “Do you have enough songs already? I said: “What is it?” And he: “I was feeling bad, and sitting at the piano I was singing this song that my father sang to me. Maybe a Ska version would be nice.” I didn’t know the song. I listened to it. And I loved it. I did a demo immediately and send him back and asked: “Something like this?” He said: “YES!” And the other folk song: “Freedom Of Thought” , “Die Gedanken sind frei,” It is originally in 3/4 time.

RSS: Every child learned about this song. At least when we grew up. How did you get the idea to record it?

DR. RING DING: The melody has a very positive effect on me. Then we transferred it into 4/4 time. Our version is inspired by the groove of “Latin Goes Ska”,  which The Skatalites had taken from the Benny Moré track. We tried to transfer the German folk song into some Afro Carribean folk song. And it works well. I like it.

RSS: Some brass arrangements could be from a Bavarian Orchestra I thought.

RSS: One very special song is of course the one you did with Doreen Shaffer. It’s a cover version of a Peter Gabriel song. How did that come about?

DR. RING DING: I’ve always been fascinated by the song, when it came out in the 80s, I liked it, though I didn’t understand all the lyrics, only “Don’t Give Up”. Not that it is about unemployment, resignation. I knew I wanted to do a duet on “Piping Hot”. I knew I wanted to do one with Doreen Shaffer. And I knew it had to be something special, out of the obvious. We could have done “Housewife’s Choice” like Derrick & Patsy. I thought it was interesting to transfer this song into a slow Ska/Rocksteady beat. I had already heard some different versions of the song. Most of them are very close to the original version that Peter Gabriel did with Kate Bush. But there is also a version of Willie Nelson and Sinead O’Connor. They changed the rhythm as well. I also do this in a duo version with a jazz singer. Doreen didn’t know the song before, but she fell in love with the lyrics, because they are positive and good. And she is a positive and good person. I’m very happy that we could do it together, and it’s become one of my favourites on the album.

RSS: Would you say there is a topic that runs through the album lyrically and topically?

DR. RING DING: I would say: Yes! The whole album deals with positivity, with life, love, lust for life. And I did this on purpose. We recorded two more songs, which are a bit more negative, and they are not on the album. For other reasons, too. But I wanted to keep the album positive. It’s about falling in love. Loving your life. Not to give up. I did other albums that are more gloomy. And I also listen to the music of Tom Waits, about broken things and broken hearts. But “Piping Hot” is different: You can listen to it and it makes you feel good. It gives you positive energy.

[alert type=”blue”]Dr. Ring Ding is the most prolific and internationally renowned Ska musician from Germany. At Reggae Steady Ska we follow-up on the release of his new Ska album “Piping Hot” with a bunch of posts, one of which will be video report due out soon.  …[/alert]