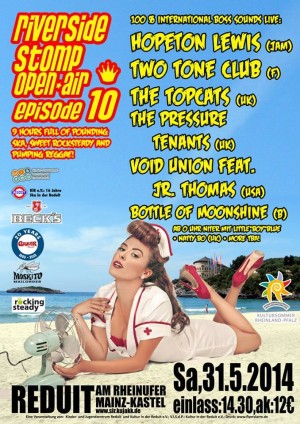 When you go to a ska festival, you probably know some of the bands in the line-up. But you don’t know ALL the bands that well. Or you know the names, but are not too sure what their best tunes are. Right? In other words, a little reminder doesn’t hurt. The same here, that’s why I just did exactly that for the Riverside Stomp Festival in Mainz 2014.

RSS has been one of the best festivals in Germany for the last ten years, in a castle yard right next to the river Rhine, organized with much heart and soul and wisdom by Hermann Junglas.

Prizes are more than reasonable, the atmosphere is amazing. The line-up: Jamaican legend Hopeton Lewis, Two Tone Club (F), The Topcats (UK), The Pressure Tenants (UK), The Void Union feat. Jr. Thomas (USA), Bottle Of Moonshine (B). I like to share my notes with you, okay? Here are some ways you can use them.

From all the bands appearing at the Reduit, Bottle Of Moonshine live closest to the venue. They are from Turnhout in Belgium. Singer Hanne Peetermans and her 10 band mates bring a mixture of Rocksteady and soulful Jazz in elaborate arrangements. It’s a perfect way to start the afternoon. You can listen to some songs on soundcloud.

Coming all the way from the U.S. American east coast, this collective of great musicians have toured Europe before. Those who saw them know that The Void Union have loads of quality music in the vein of Jamaican productions from the 1960s to give. The Void Union like to ask other musicians to join them on tour. In 2011 they toured Europe with legendary trombonist Vin Gordon (The Skatalites). This time it is Jr. Thomas (formerly of The Dropsteppers) who released a fantastic album in 2013 in his own right (where some members of The Void Union backed him). Listen and buy: Album recommendations:  The Void Union – Higher Guns (2012, Rocking Records) Jr. Thomas Meets The Venditions (2013, Rocking Records)

The Pressure Tenants (Leicester/UK) used to be the backing band for the Godfather Of Ska: Laurel Aitken. After Laurel’s death in 2005, the band went into a hiatus, but after reforming for a Laurel Aitken tribute concert, they have been building up a reputation again with celebrated appearances in the UK (Skamouth festival 2014 and more). With the new singer Conrad Stobbs, The Pressure Tenants will surely play some new songs as well as pay tribute to their own heritage. Album recommendation: Laurel Aitken – The Godfather Of Sk (2000, Grover Records)

The Topcats are a 10-piece authentic ska band from London that has been together for ages (I’m the lucky and  showing-off owner of their superb, very rare album „Mr Donkey Paradise“ from 1999). Fronted by Natty Bo, who is also in Ska Cubano, and featuring Miss Megumi (from The Trojans), The Topcats are not often to be seen live, and even less outside of the UK. Congrats to Hermann for making this happen. They are sure to bringing on a big show.

The headliner of the evening is Jamaican singer Hopeton Lewis. Is this his first ever show in Germany? I wouldn’t be surprised. Hopeton Lewis had one of the earliest rocksteady hits with “Take It Easy” 1966. The track was recorded with Lynn Taitt and the Jets, he had several more Jamaican hits in the late 1960s and early 1970s, including the first ‘herb’ song ever recorded in Jamaica, “Cool Collie“, “Boom Shaka Lacka” and „Grooving Out On Life“. Lewis then turned to Gospel music and released a string of successful albums in that genre. After appearing in the great film „Rocksteady – The Roots Of Reggae“ where he sang „Take It Easy“, he agreed to return to the music of his youth for a few live performances. This show will be one of a kind. film recommendation: Rocksteady – The Roots Of Reggae album recommendation: Hopeton Lewis – Grooving Out On Life

It has shown to be good move at ska festivals recently to round up the live sets after the laid-back appearances of Jamaican legends with a band that has a rawer sound. Two Tone Club from Montbéliard in France play this part at the Reduit. Two Tone Club have been one of the strongest European live bands for the last ten years. They also released classics as the tune „Club 69“ that pays homage to the original skinheads. AND they developed their own take on music with brit pop-influenced tunes like „I Can’t Believe You’re Gone“ (the video is in the playlist). It will be interesting to see which direction they decide to take after their recent reunion. album recommendations: Two Tone Club – Turn Off (2005, Big8Records/Grover) Two Tone Club – Now Is The Time (2007, Grover Records) For more enjoyment don’t forget to drop by the merchanise tables where you can get records, t-shirts & much more. The party goes on after the bands with djs and drinks until 4:00 a.m. time & location: 31.05.14, start: 14:30Reduit, Rheinufer 1, Wiesbaden / Mainz-Kastel Riverside Stomp 2014 @ Facebook There are more ska festivals happening in 2014. See the complete list here.