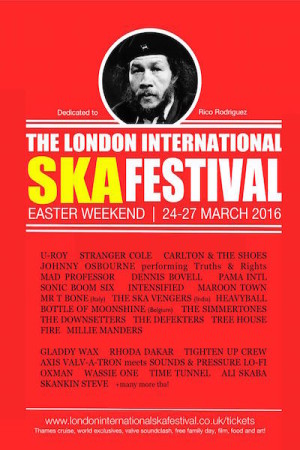 This news is incredible on more than one level. The first band that became part of the 2Tone wave (although never signed to the label) really started FORTY years ago. FORTY! Have we gotten old? Plus: Buster Bloodvessel is still up to do the Can Can, after all his health issues and personal ups and downs. Plus: It will be a triumphant return to the LISF, 28 years after Bad Manners headlined the first issue of the festival, alongside Prince Buster and Laurel Aitken.

Between 1980 and 83 their dozen BBC Top of the Pops appearances turned Bad Manners into British ska institution and pop sensation. Their subsequent hits Ne-Ne Na-Na Na-Na Nu-Nu, Special Brew, Just A Feeling, My Girl Lollipop, Buena Sera, Walking In The Sunshine, Lip Up Fatty, Lorraine, Can Can, Samson & Delilah and Got No Brains spent 111 weeks on the UK Charts making them one of the biggest selling bands of the era. They were closely associated with the 2 Tone movement (though never signed to 2 Tone Records itself), they were one of six bands featured in the 1981 documentary film Dance Craze with their Inner London Violence being a stand out track.

In 1988 Bad Manners headlined the first ever London Intl Ska Festival along with Prince Buster and Laurel Aitken. We are honoured to have Buster and the boys back to celebrate their 40th anniversary at our festival.

The London Intl Ska Festival 2016 returns to the capital this Easter (24-27 March). Celebrating ska in all it’s glorious guises from its roots in rhythm and blues, mento and calypso, through it’s Jamaican originators and onto rocksteady, reggae, dub, 2 Tone, skapunk and beyond. Headliners include; David Rodigan, U-Roy, Stranger Cole, The Skints, Don Letts, Bob Andy, The Beat, Pama International, Carlton & The Shoes and many more!”

The Bad Manners show is one more reason not to miss the London International Ska Festival 2016. Our own Pete Onthebeat will be there. Who else is going?