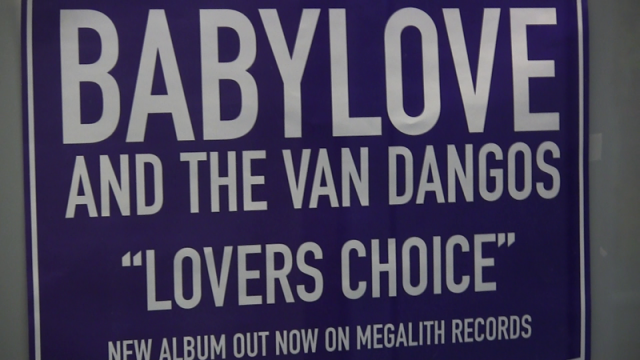 If you missed part 1, part 2 and part 3 of the interview with Babylove & The Van Dangos (May 2011), you might want to check those first.

In part IV, Daniel and Mikkel talk about their encounters with top-producer Victor Rice (who helped rescuing their second album “Lover’s Choice”), legendary singer Doreen Shaffer of The Skatalites and the late Amy Whinehouse.

RSS: The second album “Lover’s Choice” was also your first release in the USA…

Mikkel: Yes, on Megalith. But it was a long way to get there, because we were not happy with the recording sessions. It’s difficult when you have a bad feeling about something, and the process. You can’t hear it on the album of course. It’s only the seven of us. When we listen to some of the the songs: “Oh, that was that night at the studio and we spent ten hours trying to …“ … We had a whole album and we didn’t listen to it for six months. We were not satisfied with it. We tried to re-record some things.

Daniel: Yeah, we did some background vocals, some vocals, percussion and stuff. We rented a venue in the daytime, because it wasn’t used then, set up our equipment there and played around a bit ….

Mikkel: That helped a lot, and after Victor Rice mixed it, it was good to go. Daniel flew over to Brazil for the mix with him.

Daniel: That was a good experience.

RSS: One special moment on “Lover’s Choice” is a duet with Doreen Shaffer called “Number One”. What’s the story behind this tune?

Daniel: I wrote the song in Berlin on the five-year anniversary of me and my wife’s wedding. She was in Copenhagen, I was in Berlin. And I had to give her something. It felt like a duet. The funny thing is, you know Robyn, the Swedish singer, the pop singer? Before she got really famous, I always had a thing for her voice. My first idea was trying to get hold of her, because I knew a guy who used to play bass for her. But it turned out, it couldn’t be done. And then we saw that The Skatalites were coming to Denmark. So we said let’s try to get in touch with Doreen.

Mikkel: That was also a time when I was very inspired by the Ska scene. Trying to see what was possible. I didn’t know much about it before I started playing. There are some really good bands, still the most famous bands in Ska are very down to earth.

I went to New York, I just wrote an email to Victor Rice: „What’s going on?“ He answered: „Come down to the studio“. And we just went down and met him and jammed with him and some of the guys of The Slackers came over. We just realised that, lots of things are possible within the Ska scene.

Daniel: That’s the good thing that even across borders and through the hierarchy of this music it’s always possible to make friends, to get hold of people and to collaborate with people.

Mikkel: That’s the thing that if that is possible, what else is possible? Do we get Doreen Shaffer to sing? When I was in New York I was at a jam session where some of the younger guys from the Skatalites were playing. I went to them and talked to them and had a beer with them. And one of the guys said: “Sure you can have Doreen’s number”, and I was standing there in New York with Doreen’s number. And it turned they were in Copenhagen two weeks later.

Daniel: And I was just happy that we could do it as a regular recording session. The band recorded in the daytime. Doreen came a bit later. We set it up with two mics. So, we could sing it, while looking at each other. … And it was also good because she didn’t have much time to learn the song, we rehearsed it a bit, and she made some changes in it. But it sounded good anyway. So we said: “Just go ahead.” We were just dancing a bit, and at one point holding each other’s hands. It was beautiful. It was like you SHOULD record. Not through email or whatever. „I sing this in Zimbabwe, and I send it to you. And then you mix it together.” This was the way it should be, with a better chemistry.

Mikkel: I guess there are a lot of bands who think that if they bring in a guest they might sell more albums in the end. Or do better promotion. For us it was nothing like that. It was more like a dream come true.

Daniel: Of course, Doreen is a really famous the singer of The Skatalites. But another guest on “Lover’s Choice” was Coolie Ranx (on “Big Big Baboon”). That was kind of the other way round. I always loved his vocals and I always thought that not enough people know him. So at least with this album the people in Denmark, when they buy it, they hear him at least once. And then they can decide, whether his stuff is what they want to hear.

RSS: Then on the third album “The Money & The Time”, instead of having guests, you sang ABOUT  a famous colleague: Amy Whinehouse. What exactly inspired you to write the song?

Daniel: I was in Berlin at the Tempodrome. It was on her tour when everything went down. The Berlin gig was good, she could still sing well, But I was standing right in front with my wife and my parents in-law. … You could see in her eyes that she didn’t want to be there. And when she was kind of confused the band were making jokes about her. Almost laughing a bit behind her back. I felt so fucking sad. Cause she could still sing. And it was a good performance. But you could see that she shouldn’t be on that stage, maybe somewhere else relaxing. And somebody should pat her on the back: „Have an ice cream.“ It was sad to see that she was (being used) like a milk cow. Just being pushed to the edge to make some money.

RSS: But still, if she liked to be on your next album, you wouldn’t say no…

It would have been brilliant to hear Daniel to sing with Amy Whinehouse, like he did with Doreen Shaffer. But this dream didn’t come true. As the world knows, a few months after the interview Amy Whinehouse died.

The new album “Let It Come, Let It Go” by Babylove & The Van Dangos is out now, receiving rave reviews  and already named a hot candidate for the title Best Ska Rocksteady Early Reggae Album of the year 2012.

A review is following shortly here on reggae-steady-ska.com.

You can order it now at The OfficialReggae, Steady, Ska Shop. (Affiliate Link)