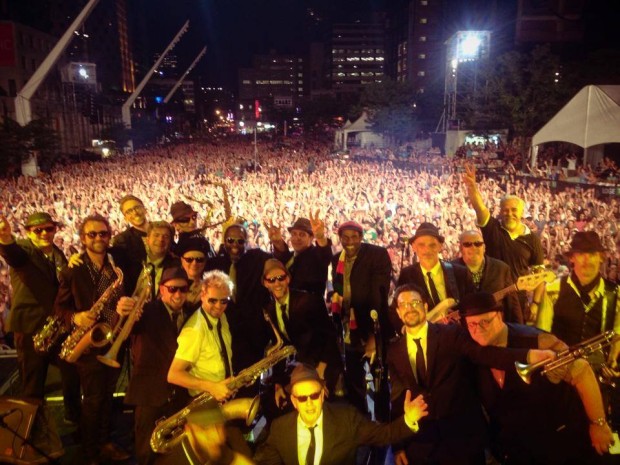 How do you top having your debut release named the 2013 Album of the Year by the jury at REGGAE STEADY SKA? If you’re bandleader Nicky Bomba and the Melbourne Ska Orchestra, you set out on your first-ever world tour, traveling halfway around the globe to play shows in England and Canada. A massive undertaking, but then the 25-member band doesn’t seem to do anything in a small way. I spoke with Nicky before he joined the band onstage for their amazing street-party show in Toronto.

Reggae Steady Ska: Welcome to Toronto, and congrats on making this tour happen. What’s it been like?

Nicky: It’s a bit of a dream come true. I was touring with the John Butler Trio for four years, and it was only last year when things started really happening with Melbourne Ska Orchestra (MSO). I remember being in this part of the world thinking, wouldn’t it be great to bring the music I write over here? I knew it would really connect. But when you have a 24-25-piece band and you think, geeze, how do you work out the logistics for that.

When we last interviewed you, we asked what it was like touring just around Australia and you said, “Somehow we just make it happen.”

Yeah, yeah—and when you’re talking about traveling the world, throw on $3,000 for air fare [per person] and then…you do the math. We applied for a couple of grants—we didn’t get them. Then it came down to just making a commitment and we said, “Let’s do this.” The tour has been amazing. In Montreal, we played to 40,000 people. The people have been really blown away—and I’ve been really blown away by the level for the enthusiasm for the music. Last night, we were in Quebec City, and just because the name SKA was on the poster there were lots of people who came out who said yeah, we love ska. They never even heard of us, but they knew ska and wanted to hear it. And that’s a sweet thing. For us, this has been a beautiful mission in planting the seeds, and we hope to come back next year to nurture the plant.

You don’t usually start such a large band and think you’re going to be touring around the world.

That’s true, the whole band started as just a fun thing and I’m probably more surprised than anybody that a band of this size, out of all the bands I’ve ever played with, out of all the gigs I’ve done, this is the band that has transcended. And to have that many people work so well together, and to put on a performance that is unique, that no one else is doing, we’ve stumbled into it. Kind of stumbled into what I’ve always been looking for. The driving force is a real passion for the music, with the source of fun and adventure that translates. And I’m still kind of pinching myself, saying wow!

We were on the bus the other day from Montreal to Quebec, and it was like this moment kinda kicked in. Half the band has never been to North America. It didn’t click to that until that moment. I’ve toured with other bands, other places, but this is a lot more special. I’m on the bus, looking out the window, looking at Canada, and it was like, “We’re actually fucking touring Canada—we’re doing it.” I got up on the microphone and I said I just gotta tell ya, this is amazing. It’s a beautiful bunch of people, a real family atmosphere. I appreciate life. Just really being in the moment and being present with it all. I don’t want to be, you know, like, getting back home and thinking, shit, I wasn’t totally there to appreciate it.

You played England and that had to be special.

Playing Camden, that was special, then Glastonbury. It’s like taking ice to the Eskimos. But this music is universal and our take on it, no one else is doing that, and I kinda just had a just go and appreciate it. So there was this whole thing—Do we do stuff that they may have heard before or we don’t do that song, is it too derivative of something?—and then, you know, it’s just fuck it, let’s put on a show, have fun, and it was the right thing to do. We never say we’re a pure ska band. We’re from Melbourne, which is a multicultural mixing pot anyway, and we reflect that. And when you think about it, the world’s getting that way. So it’s kinda universal ska. We do the reggae, we do the funk, the cumbia, the rock steady—we mix it all in. Especially in the UK, they’re the most discerning audience—they’ve had it all. To get an encore there—to blow them away there—and at Glastonbury—to get a captive audience that stayed—our crowd kept getting bigger and bigger. That was like a massive tick. That was really much like playing for the ancestors, if you like. That’s where I’ve learned that stuff.

What are you going to do next? Will there be a live album?

Lots of things, actually. Probably a live DVD. We’re scheduled to do another studio album next year. We’ll start recording that at the end of this year. And the thing they want to hold back on, that I want to do straight away, is an album of TV show themes, like the Skatelites did with the Guns of Navarone. That sort of thing, but new ones, even up to Game of Thrones. Those are things on the agenda, but we’re always writing. This is all still new, even in terms of the live show, developing all the little things that we can put in that works with the crowd. This whole thing is just this flower, it’s beautiful that we’ve caught the band at its early stages. We don’t have to do ten years of slogging to get to the point to play to big audiences. I think people get it and that’s great, so we can fast track this, and I’m always up for fast tracking.

And I would love to take this to Jamaica. And then I would be…aaaaaahhh!

Some quick thoughts by other members of Melbourne Ska Orchestra

Steve Montgomery (vocalist and dancer, also a member of the Ska Vendors): The tour is wonderful. The folks in Canada have taken to the music and band, and we’ve been, I’d say, blown away is an understatement by the way the people have loved the music. Within the band there’s a fever and the love of the music and an acceptance that we’re part of something unbelievably large. It’s bigger than us, it’s bigger than the individual. There’s no egos involved. Nicky’s the lead man, he runs the show, everybody else pitches in, there’s no bitchin’, none of that stuff. Everybody just gets on, everybody helps out each other. If a brother falls down, we pick him up and carry him. Period. Like in Glastonbury. Period. We did a lot of that.

Paul Coyle (trumpet player and arranger): I think the shows have been amazing. Everything else—the lobby calls at six o’clock in the morning, leaving straight from the show to drive back to Heathrow after Glastonbury, the schedule has been brutal, but the shows have been amazing. Just watching—at Montreal, especially—fifty thousand people didn’t know who we were, watching that excitement spread like a wave, wave down the audience, then come back ten-fold. It was an amazing experience.

Videos from the tour

A snippet of “Katoomba”

Great overview of the Montreal show in HD

Example of how Nicky Bomba plays with the crowd