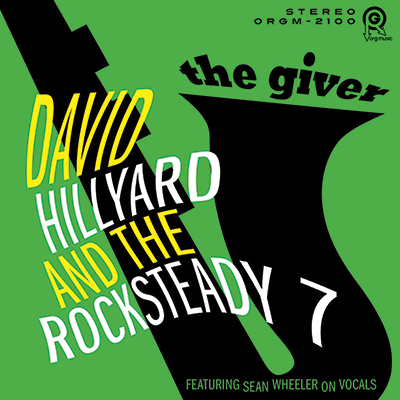 In the ultimate ska band made up of active players, Dave Hillyard would be my choice for tenor sax. He’s certainly been around. The Slackers, Hepcat, Stubborn All-Stars, The Bluegreens, Rancid, Donkey Show … his incomplete, 30-album discography on Wikipedia has at least two of your top 10 ska albums. This month, he releases The Giver, the latest with his band The Rocksteady Seven, featuring vocals by Sean Wheeler, frontman for The Reluctant Messengers, a brilliant, unconventional choice that helps make The Giver an exceptional album.

The 11-song CD opens with More Than 2 Sides, a perfect summertime reggae instrumental, then jumps into a cover of Glen Sherley’s Measure of a Man. Sean Wheeler covered this song on his album, Sand in My Blood, where he gave the country standard a roots-americana feel. But on The Giver, you’d think it was a Studio 1 original by some forgotten, raspy-voiced singer. It’s followed by Now That You Know, a Wheeler-original, slow-burn blues that takes on a sweet rocksteady sound without losing its intensity.

The title track is the only song on the album co-written by both Hillyard and Wheeler, and it’s the heart of the collaboration: “When a brother needs a hand up not a hand out / don’t confuse the two / you get to help so give back please / seize the moment God’s bestowed you to help your fellow man and grow together / quite simply.” Not a bad anthem for our times, at least here in the states.

Dave goes old, old school with a cover of the 1935 Casey Bill Weldon song, The Lock on My Door, and then even older with a ska arrangement of Song of the Underground Railroad. It’s considered a “traditional” song, but it’s known for John Coltrane’s 1961 version, making this a bold choice. Hillyard’s version strips away all of Coltrane’s free-form embellishments, bringing it closer to its Afro-Caribbean roots. As a sax player, I’m in awe of Coltrane—but I’ll listen to Dave’s version a lot more.

Sean covers Gil Scott Heron’s classic Home is Where the Hatred Is with The Reluctant Messengers. That version stays close to the funky original, and the version on The Giver doesn’t stray much further. Sadly, the current opioid crisis makes this song just as relevant as it was when GSH first recorded it in 1971. It’s followed by Take a Chance on Me, a tune so light and poppy that it almost feels like it’s on the wrong album. But we’ll keep it since it’s so much fun.

The album wraps up with two non-ska songs—the Motown sound of Someone Else’s Love Song and Dark Before Dawn, a straight jazz tune that has an unusual double-thumping bass/guitar rhythm that quickly gets monotonous, overshadowing the excellent sax and vibes solos.

The Giver is a wonderful album that shows a master sax player and his tight band at their best. And the brilliant addition of Sean Wheeler takes the whole thing to a new, higher level. At the halfway point of the year, it’ll be hard to top The Giver for best album of 2018.

The SlackersUSA
Previous ArticleNew Single from The Big TakeoverNext ArticleReggae in the Desert 2018, Las Vegas – June 9