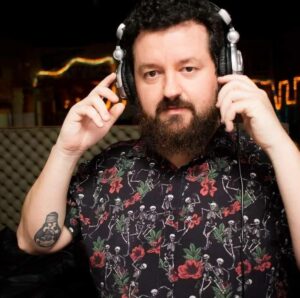 of skataplá, one of the most traditional ska podcasts in Brazil

1) Buena Onda Reggae Club – Disco 2
A contagious record! The second album of the 8-piece Brazilian band was my 2020’s main soundtrack. It has 12 instrumental tracks that perfectly blend the best of ska, reggae and rocksteady with some Latin music influences. The album was impeccably produced by Victor Rice, who also appears here on my list.

3) Ska Jazz Messengers – Introspección
What a great surprise to Latin ska fans came from Venezuela last year. “Introspección” is a nice trip to the Jamaican roots of ska and rocksteady with a soothing touch of modern jazz and soul. The more I’ve listened to this album, the more I fell in love for its 12 great songs, some instrumental, some with the beautiful voice of Ruthsy Fuentes.

4) Victor Rice – Drink
Victor Rice is currently more Brazilian than American. And you can notice that by listening to his latest album “Drink”. The record has some incredible arrangements of traditional Jamaican music like ska and dub with some unique Brazilian spice. Victor has said that the 10 “Drink” songs were made under the influence of red wine, and they taste as good as it gets.

5) Toots & the Maytals – Got to be tough
I couldn’t leave last Toots’ work outside this list. The reggae/ska veteran who died last year left this final record as a vigorous goodbye with some great reggae, funk and soul tracks. “Got to be tough” is far distant from the Maytals’ first records, but it won me over by bringing back Toots and his strong voice after years without new songs. Rest in power!

Info:
Hello, rude girls and rude boys! My name is Denis Romani and I am a journalist, DJ, podcaster and have been a ska fan since I was 12 years old. I host Skataplá, one of the most traditional ska podcasts in Brazil. Skataplá started as a radio show in 2010 at a local radio station from São Paulo, Brazil, and since it became a podcast it’s also been broadcasted by the webradio MutanteRadio. Since 2019 I also organize the Skataplá Awards, which honors the best artists/bands in the ska and Jamaican music scene, especially in Brazil. I also play the trumpet at a street carnival group in São Paulo called Bloco Skaravana.