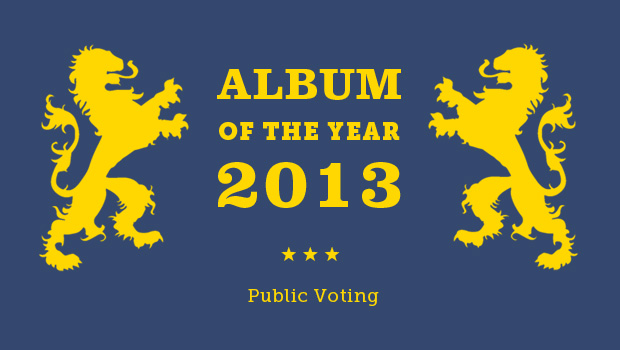 That was it, the public voting for The Album Of The Year 2013 poll is over. Exciting times on the page. It got a little hectic in between. Thanks to everyone who participated.

And huge thanks to everyone who took the chance to discover new music, for example in the 5 hour long playlist with tunes from many albums on the shortlist to The Album Of The Year poll. It made my day to receive fine messages from people who thanked for this service. If you haven’t already, please give the playlist a listen.

The winners of this year’s public voting are The Aggressors B.C., a band from Belfast in Ireland, who competed against many bigger names and were able to collect more 1300 votes, Dave Hillyard close behind. You can listen to and buy the album by The Aggressors on bandcamp, as well as the albums of many other participants.

I found some other things striking, too. The sheer number of bands that were able to receive more than 50 or 100 votes! That’s quite a success already. And it was great to see when bands urged their fans to listen to the other bands on the list, too. And then to give not one, but three votes.

Did you check he jury voting that we arranged for The Album OF The Year. Do that here, if you like.

Haven’t had a look at the results of the public voting? Here they are: