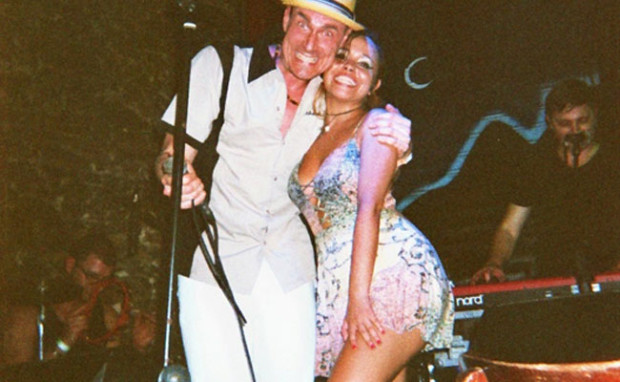 Editor’s note: This is a guest post by Kay, singer of Yellow Cap.

Our fourth tour of Brazil (January 29 – February 14, 2016) is starting at a Carneval concert in Sao Paulo, which our friends OBMJ (Orquestra Brasileira de Música Jamaicana), a quite famours rocksteady group, are playing. Carneval has not started yet, but still we get an impression of what might happen later. By the way – greetings to Cologne, Mainz etc: you should think about moving Carneval to summer time. 30°C is much better to party.

The first highlight of the tour: On January 31st, after long preparations we will record our new song “Around the world” with Victor Rice! Who would have thought! A really kind, laid-back and so talented man. He’s not one of the most famous and most experienced producers in the scene for nothing. And we have some great support, who’s not so well-known in Germany, but a uma problema grande – a big thing – in Brazil: Lourdes la Luz is rapping the Ragga part. Goosebumps. Her song „Andei“ was part of our soundtrack to previous tours.

We took a night bus to Rio de Janeiro. Clemens got some serious influenza infection, which over the following days will also harm five others of the crew. Because of Sal de Frutas, special fruit salt which is being advertised all over, Clemens feels better soon, so we can play the first show of the tour in the middle of Lapa, Rio’s Kreuzberg, where Samba, Pagode, Bossa Nova and Forró play a huge role. Opener of the night is our friend Fernanda, backed by our brass section. There’s not a large crowd, but it’s nice and heartful. Highlight of the show is definitely Toots Hibbert’s 54-46 with Fernanda singing in a duet.

Next stop: São Carlos. We are playing at a crowdy show in the middle of the city. Just before starting the show Kay’s face is turning pale. You know what this means: „To be honest, this was the heaviest gig I’ve ever played.” Influenza is a heavy topic in Brazil right now with all the bad consequences of a Zika infection. We were quite worried, until Kay, Peter, Clemens and Fritz finally felt better …
Our next show is a „Grito Rock“ gig at a Fazenda, a farm, close to Sertãozinho. This festival series takes place all around Brazil as an alternative to the traditional Carneval. As we should play in Ouro Preto in Minas Gerais the next day, a ten hour drive away, and still had no place to sleep, we decided to drive through the night. Life on tour is tough.

Sunday February 7. All struggles and fatigue are forgotten when we arrive at the Praça Tiradentes in Ouro Preto. Hell was raised! That’s Carneval! One bloco de samba is pushing the following through the excited masses. When we are walking up on stage at 7:30, around 20.000 people are gathering in front of us and are celebrating us, our music, like at no other show to follow. Everyone’s dancing, even in the back rows. Fireworks. Big feelings. It’s fantastic! We are driving to Belo Horizonte, Minas Gerais’ capital, through the night again – where Jogi’s boys made soccer history against the Seleção: 7-1! After two exhausting days and even harder nights in the van we are kicking back into soft beds in luxury hotel rooms.

Ribeirão Preto, our next gig, is small. Very small. When we are driving up to the doors, around 350 people are standing in front of the club and waiting. Maybe 50 people fit inside. We are basically standing on a little court surrounded by the audience. Everyone’s dancing, pushing, sweating … We are being treated as friends. Actually everywhere, but especially here. It will be our most intimate gig.

Then comes a home game: Poços de Caldas. Fourth time, everyone knows us here. There no such pompous Carneval as in Rio de Janeiro or Sao Paulo, but people are enjoying Carneval in a lot of places throughout Brazil. There are festival stages in every corner with music from blues to samba rock. We are sold out with 450 tickets, hilarious show. When one of us was catching a glimpse of the watch it was 4 in the morning when we are finishing. On Ash Wednesday! We are staying. Even though Lars is sick now.

Next day a supposedly never ending drive to Barbacena. Thomsen is sick. We are meeting our longtime friend, part time manager and tour manager Fred Furtado. Without him and his brother in crime Clebinho it would have never been possible to reach this state of popularity we are profiting from now. Just like last year we are playing at Mirante club on the Barbacena hill, high above the town – what a fantastic view. Before having to leave the next afternoon to Belo Horizonte we are having some time for a good lunch with Fred.

The team at Baixo Centre in Belo Horizonte is already waiting for us. The soundcheck is an adventure, but we learned to stay cool. And actually the sound during the show is not easy for us, but no problem for the atmosphere. The club was crowded and people seemed to have regained some energy since the end of Carneval.

February 12. Two more shows, the tour will be over soon. After a ten hour drive we are arriving late in Campinas. The promoter David was happy to have us headlining his 10 years Festival anniversary show of „Skandalosa“. When we are playing a Derrick Morgan song together with the opener Malacabeza late at night, people are freaking out. A long night is finding its end with a sunrise on David’s terrace.

And then it’s finally there. The last day of the tour. We are closing this chapter with a headlining gig at the „Skarnaval“ Festival. Our drummer Larry interrupts the show after the first half of the set and invites the audience to sing a birthday song for our singer Kay. The entire hall is chanting to „Parabens pra voce“. Kay is clearly touched.

Two hours later we are having our last drinks with the whole crew in front of the hotel, as only five of us will go on to the beaches of Costa Verde the next morning: to a small, sleepy village at the beach, surrounded by the jungle. The local drink is called Gabriela.
Now we are back in Germany with a pocket full of good intentions, ideas and inspirations. Hopefully the daily routine will not kill of it by the blink of an eye. Side note: Use the next day to plan the next tour!

Kayode
Kay is the singer of Yellow Cap, a long-running ska band from Dresden, Germany.