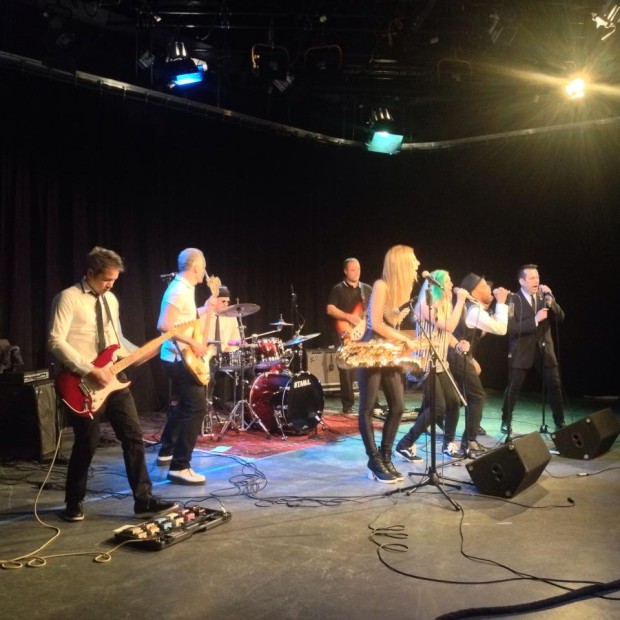 NY-based Rude Boy George is receiving a lot of attention for the fun way it blends the two best things to come out of the 70s and 80s—2Tone ska and New Wave. The band’s 5-track debut EP, Take One, captures the sound of a time that could have been. Band co-ounder, backing vocalist and Duff Guide to Ska blogger, Steve Shafer sits down with RSS to field a few questions.

Reggae Steady Ska: The band’s lineup reads like a Who’s Who of New York City ska. How did you all end up on the same stage?
Steve Shafer: Rude Boy George was born out of an idea that had been rattling around my head for a few years: to form a band that would do ska covers of New Wave and post-punk classics. I was in high school in the first half of the 80s and loved all of the New Wave that was coming out of the UK, which included 2 Tone ska—lumped under the New Wave umbrella in America along with a lot of other musical sub-genres. So in my mind/experience, ska and New Wave fit together quite well. I finally shared this idea with my friend and fellow ska blogger Marc Wasserman of Bigger Thomas and the Marco on the Bass blog. He loved the idea — and then he, Roger Apollon, Jr. (also of Bigger Thomas), and I discussed it all one night when we were out seeing Morrissey perform at the Brooklyn Academy of Music. Things moved very quickly after that and the band was formed out of members of Bigger Thomas, The Toasters, and Across the Aisle — and a few months later it solidified into its current incarnation: Marc Wasserman on bass, Roger Apollon, Jr. on vocals, Jim Cooper on drums (all from Bigger Thomas), Megg Howe on vocals, Jackie Chasen on sax and backing vocals, Jesse Gosselin on guitar (all from Across the Aisle), Jeff Usamanont (Funkface/Daft Phunk/Electric Company) on guitar, and Steve Shafer (ex-Moon Records promo guy and Duff Guide to Ska blogger) on backing vocals and melodica. In a moment of sheer brilliance, Roger came up with our name—Rude Boy George—which beautifully illustrates our blending of ska and New Wave.

Vocalists Megg Howe and Roger Apollon create a hauntingly cool sound, especially on Don’t Change. Was this the first time these two had worked together?
Yes, actually! I had become friends with Megg after reviewing Across the Aisle’s debut EP a few years ago on my blog and then talking/hanging out with her and the band after some of their live shows. I’ve always been really impressed with her voice and stage presence and she immediately came to mind when Roger, Marc, and I were putting together Rude Boy George. In true 2 Tone fashion, we wanted the band not only to reflect ethnic/racial diversity, but a mix of genders. So, I approached Megg with the idea and she agreed to become one of our co-lead vocalists on the spot. She and Roger instantly clicked in our first rehearsal. Both of them are really dynamic performers and have a really great chemistry on-stage. Plus, they’re both really great people.

Your setlist is packed with New Wave classics from bands like Human League, the Romantics, Talking Heads, Culture Club, INXS and Squeeze. With so much great raw material from that era, how do you decide which songs you’re going to reinterpret?
It isn’t easy! We have these long, involved email threads between everyone in the band where we offer up suggestions for songs that we think will translate well into ska or reggae versions (and each of us has extensive lists of songs/bands we want to cover). Since we try to operate the band in a democratic fashion, the songs that generate the most interest—or someone is most insistent about—are the ones we try out in rehearsals. What’s funny is how most of the songs that we cover click immediately, while others that we thought (and want) to work just won’t, not matter how hard we labor at them. We also struggle a bit over whether or not to do the more popular New Wave hits or the deeper album cuts—but we’re working toward getting the balance right. Megg was the one that suggested that we cover Cyndi Lauper’s Witness off Lauper’s debut album; it’s a song that no one else in the band knew—and we were all in high school and college in the 80s—but it turned out to be one of our best covers and always goes over well live.

Take One was produced by Wayne “Waylo” Lothian, a gifted musician who’s played with General Public, Special Beat and English Beat, as well as New Wave artists like Thomas Dolby and ABC. How did his many experiences help shape the Rude Boy George sound?
We’re so, so fortunate to have Wayne as part of our group. Wayne did an incredible job with our EP—few ska recordings sound as good this! As you mentioned, he possesses such incredible skills and experiences in both the ska and New Wave realms, as both performer and producer. In working with Wayne on this project, we discovered that he brings a very modern sound while keeping a very soulful and “classic” quality to the music he produces. We were absolutely floored when we heard the first mixes of the EP, as he gave the band a very full and textured sound that the band wasn’t aware of when we recorded. It’s fair to say that he is responsible for crafting our sound to make it accessible not only to true ska/reggae fans but to fans of pop music as well. He has this great affinity for the project and completely believes in the band and our mission. Plus, he’s just a really wonderful and decent human being. Roger and Marc have known him for years and when he heard about Rude Boy George he wanted in!

The EP has a cover of The Romantics’ Talking in Your Sleep as well as a remix of your version, featuring English Beat toaster Antonee First Class. His new single Who Are You? was also produced by Wayne Lothian. Was that how your paths crossed?
Yes, Wayne was the common thread in that collaboration!  Roger and Marc opened for the English Beat with their band Bigger Thomas at least a dozen times over the past two-to-three years. During that time, Wayne and Antonee were part of Dave Wakeling’s touring band and they got to know each other fairly well from having conversations before and after shows. Needless to say, once Wayne began working with us, he called in a favor and had Antonee chat over the track at his studio in LA. One of the many perks of having Wayne on board is that we benefit from his vast connections to some of the most talented musicians in the industry!  When we go into the studio again in the near future, be on the lookout for more “surprise” guests!

Have you heard any reaction from the bands you cover?
Not yet—though Lynval Golding of The Specials (who is good friends with Wayne Lothian) really likes our EP and what Rude Boy George is doing. Before we released our EP, I wrote an email to Boy George’s management letting them know that our name was, in part, an homage to Boy George and how he represents the New Wave aspect of the band and our name—but we never heard back. In a way, I think we were seeking his blessing and even though he didn’t respond, it wouldn’t have felt right not to let him know what we were doing. (Boy George has a new reggae album out and some of us are planning to go see him at Irving Plaza next month!) A few people in the band have connections to several New Wave-era artists and we’ll see if we can get them to guest on some of our new recordings…

What’s next for Rude Boy George?
We’re going to be recording a cover of Madness’ Driving in My Car for the Specialized 3 charity album that benefits the Teenage Cancer Trust in the UK (plus there are plans for our track to be released as a vinyl single by Jump Up Records) and we’re returning to the studio soon to lay down some new tracks with Wayne in the next few months, releasing some of them on vinyl later this year. In addition, we’ll be continually adding new songs to our repertoire and playing gigs in the New York City area and beyond. So, more recorded music and more gigs!